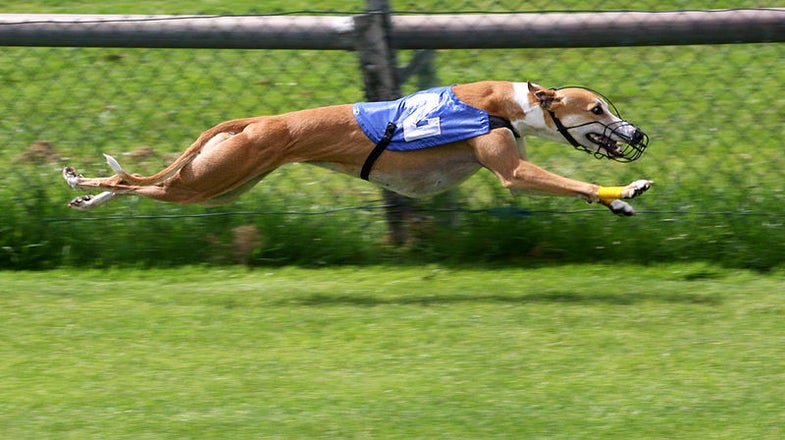 The cheetah, the world’s fastest land animal, can race up to 75 mph for short bursts. The greyhound is the fastest canid, with a peak speed of about 43 mph. Cool facts! Now let’s watch them run in super slow motion.

Note that while cheetahs and greyhounds are very, very different animals, they’ve independently evolved to have very similar running styles. Both animals use what’s called a rotary gallop, in which the leg hitting the ground moves in a circle: front left leg, then front right, then hind right, then hind left. This is the natural running style of dogs, cats, and some ungulates like deer and elk, but different than that of horses (which are built for endurance rather than sprinting speed).

They also have a similar two-phase gait: in the first, the body is elongated, parallel to the ground with both pairs of legs extended also parallel to the ground. The spine is stretched out, and the animal, in slow motion, looks like it’s flying. Then there’s the compression phase, in which the front and hind legs actually overlap underneath the animal, and the spine is crunched up, getting ready to pound the ground and push forward. It’s a pretty amazing video of some pretty amazing animals.