11 Reasons Why Cat Bites May Be Linked To Depression

Here are the best possible explanations for the strange correlation. 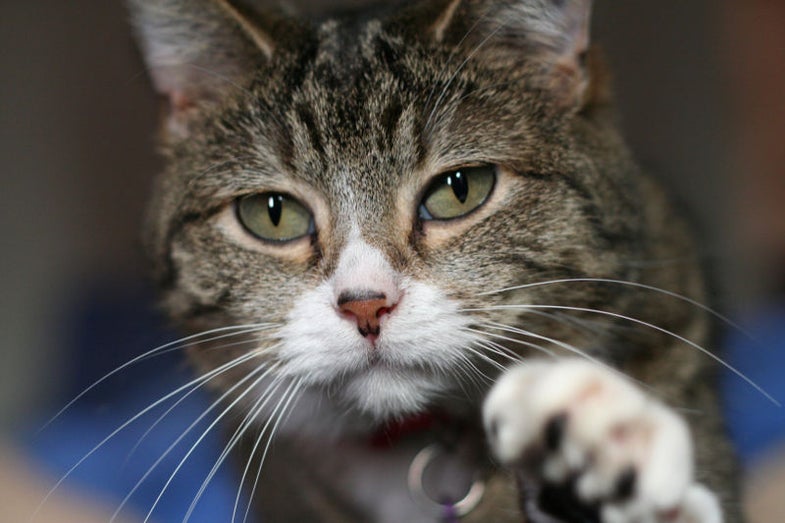 In case you hadn’t heard, cat bites are linked to depression. As I wrote last week, a study in PLOS ONE looked through the health records of 1.3 million people and found that 41 percent of people who were treated for cat bites were also diagnosed with depression. And 86 percent of the people who had been both bitten and diagnosed with depression were women. The story got quite the reaction, and generated a few new theories to explain the link. Here are our favorite explanations for the link, starting with the most plausible:

2. Those who are more attached to their pets tend to be more depressed, according to the study. It is possible that somebody who is more attached spends more time with said cat and is thus more likely to get bitten.

3. Cat bites can actually be quite serious. A new study published this month in the Journal of Hand Surgery found that nearly a third of people who’d been bitten by cats had to stay in the hospital for more than three days, in part because cats’ long teeth can cause deep puncture wounds that are difficult to clean out, and which can become infected. It’s possible a serious infection/medical condition could contribute to depression.

4. Depressed people may make less eye contact with cats, which have been shown to respond to human gaze, as the authors write.

5. Depressed people may act in some other way that’s offensive to felines. Perhaps, for example, they are more likely to forget feeding their pets. “I can tell you right now what my cat’s bites are linked to–his hunger level,” wrote a friend of mine on Facebook.

7. Cats can transmit the parasite Toxoplasma gondii in their feces. Studies have shown a link between the presence of this parasite in humans and mental disorders including depression.

8. I had to laugh at this reason, posted on Fark. “Cats don’t like the way depressed people pet them,” wrote one user. “In fact, it pisses them off. So they bite to make them stop.”

9. Some of the bites happened when people were trying to break up fights between cats, according to the study. It’s possible that depressed people are more likely to own multiple cats, and thus more like to be bitten in this way.

11. Perhaps a few of the depressed patients injured themselves, and then instead of admitting it blamed it on the cat.