Giant Clams Are Greenhouses For Algae 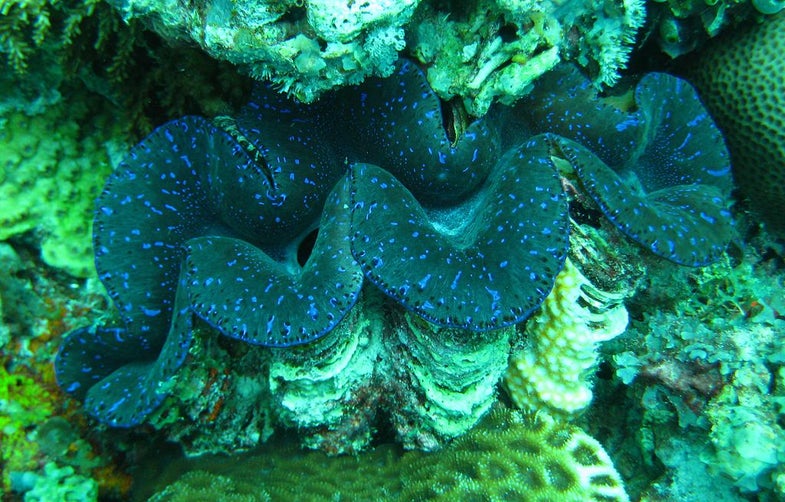 Giant clams loom large on coral reefs, their gaping maws filled with bright lights. On other mollusks, this iridescence is a camouflage, guiding the eye away from the creature’s body. Recent research published in the Royal Society of Science’s journal Interface reveals that these patches of iridescence filter and distribute light for algae that grows inside the clams.

Algae and giant clams have a symbiotic relationship. Algae are the engine of the sea, turning sunlight into useful nutritional value for almost everything else. Clams host the algae so that they may consume the by-products of the algae’s photosynthesis. Algae need sunlight to grow, but too much is harmful, so clams, which have tiny iridescent cells inside their mantles, offer the best of both worlds.

In the paper, called “Photosymbiotic giant clams are transformers of solar flux“, Amanda L. Holt and her team show that the iridocytes filter light, sending the wavelengths most beneficial to algae into the mantle, and scattering the more harmful wavelengths away. Algae, in turn, hangs out in the mantle in “micropillars,” maximizing surface area for absorbing the light. The whole system is mutually beneficial.

Beyond the coolness of figuring out that the reason clams shine so brightly is to make little symbiotic farms, there’s a practical application to this knowledge. Algae has a lot of potential as a biofuel, but it often takes novel solutions to get a useful, harvestable oil. New techniques for humans to turn algae into biofuel may filter light like clams do, making a bright future for green energy.