See The World Through The Eyes Of A Cat 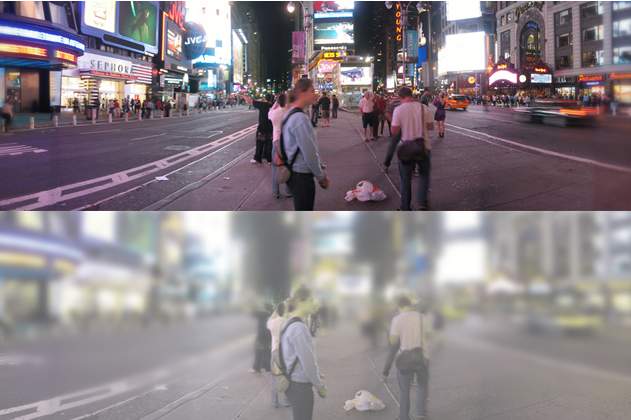 What does the world look like through a cat’s eyes? The basic structure of feline eyes is pretty similar to what humans have, but cats’ vision has adapted to very different purposes, so the world they see looks familiar, but isn’t quite the same as ours. As predators, they need to be able to sense movement well in very low light. To make that work, they have to sacrifice some of the finer detail and color perception that humans have.

Artist Nickolay Lamm, who has previously brought us visualizations of urban heat islands and sea level rise projections, took a look at the world through kitty eyes for his latest project. Lamm consulted with ophthalmologists at the University of Pennsylvania’s veterinary school and a few other animal eye specialists to create these visualizations comparing how cats see with how humans do. How we see things is represented on top; how a cat standing next to us would see the same scene appears below.

Cat vision isn’t so great at a distance. What we can see sharply from 100 feet away, they need to see at 20 feet. From what researchers can tell, cats can see blue and yellow colors, but not red, orange or brown, which is why all the images look a little washed out. Your kitty sees in Instagram, it seems. Not so good for looking at far-away, lush landscapes:

But here’s how much better cats’ night vision is:

Cats can see some six to eight times better than us in the dark, partially because they have more rods, a type of photoreceptor in the retina. Their elliptical pupils can open very wide in dim light, but contract to a tiny slit to protect the sensetive retina from bright light. And like other animals that evolved to hunt at night, cats have a tapetum lucidum, a reflective layer of tissue that bounces light that hits the back of the eye out through the retina again for a second chance to be absorbed by the rods. It’s also what gives them those terrifying glowing eyes in pictures.

Now go stare deeply into the eyes of a beloved feline.