Australia’s Invasive Cane Toads Have Evolved To Hop Even Faster

The "cane toad front" now moves about 60 kilometers a year. 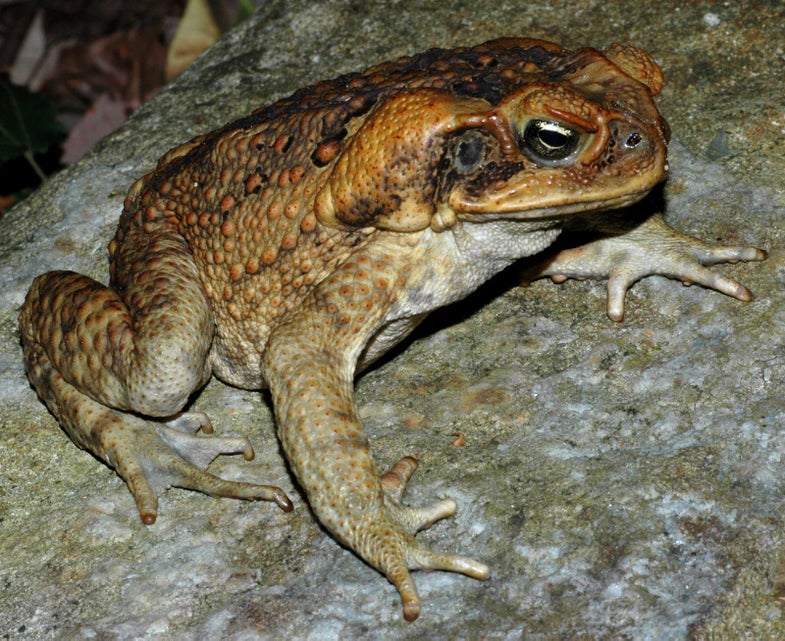 Cane toads in Australia have evolved to hop straighter and farther than ever before, Australia’s ABC News reports. That means they’re spreading faster than ever through Australia, sparking worries that they’ll harm native species in places where they’ve never lived before. Twenty-six years after the debut of Cane Toads: An Unnatural History, it seems scientists are still struggling to control the large, poisonous toad.

Sugar growers released cane toads, which are native to Brazil, in Australia in 1935. They wanted the toads to eat cane beetles, a sugarcane pest. However, cane toads didn’t eat cane beetles; instead they began killing off native species such as lizards and crocodiles, which would die after eating the toads. Sometime in the 1990s, a quirky documentary reporting on the cane toads’ effects in Australia became popular—and made the chubby amphibians into the international poster children for what can go wrong with introduced species.

Since then, scientists have continued to study cane toads in hopes of slowing down their invasion. Researchers have documented how some Australian animals have evolved resistance to cane-toad toxin or have learned to avoid the toad altogether. Yet in a recent study, University of Sydney biologist Rick Shine and colleagues found super-fast cane toads are mating with each other, creating fast-hopping offspring and pushing their kind rapidly westward. “The front has accelerated from about 10-15 kilometers per year to about 60 kilometers per year over the time toads have been in Australia,” Shine told ABC. “To move at that rate, toads have to behave in very strange ways — ways that no other frog has before.”

Meanwhile, others have tried control measures — both conventional (round up and kill) and unconventional. In April, ABC News reported some park rangers were dosing native animals with small amounts of cane-toad poison, to teach them that the toads make them ill, before the toads arrive in a region. Shine is working on making traps that kill cane-toad tadpoles, using the toxins taken from the adults.