This technique can even identify the drink’s origin, blend, age, and taste. 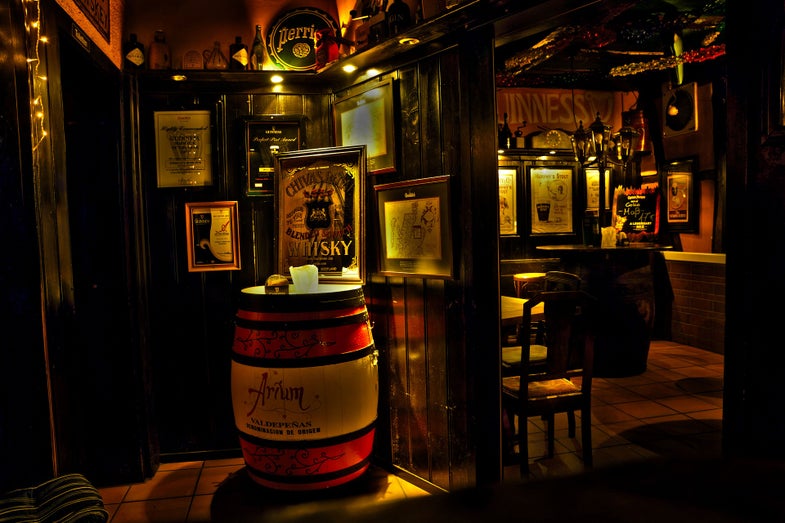 Sometimes science means sacrifice. Other times, it means buying 1,000 euros worth of whiskey. That’s what one team of scientists in Europe did to test their high-tech new technique for telling whiskies apart.

Of course, “we had to use our own money,” says study co-author Uwe Bunz of Heidelberg University. “You can’t just use state funds, otherwise I think our higher-up administration would be fairly unhappy.”

The technique, unveiled in a study released today in the journal Chem, not only identifies a whiskey’s age, origin, blend, and taste—it can also theoretically spot a counterfeit. And that’s valuable intel: The Distilled Spirits Council reports that in 2016, American whiskey raked in $3.1 billion in revenue alone. Some investors even buy whiskies that run up to a half-million dollars. But the team’s fluorescence fingerprinting technique goes beyond whiskey differentiation. It can also help catch fake or impure drugs, wines, juices, and more.

This “fingerprint” occurs because of the unique ways in which the sample (whiskey, in this instance) affects fluorescent dyes. Normally, the team’s selected water-soluble dyes glow green or blue-green under a blacklight. However, once the researchers add a little whiskey to each of the dyes, the combined solution dims or shines more brightly. By doing this to several vials of different dyes, a unique pattern of dimming and brightening appears. This pattern is then a “fingerprint” that corresponded with each whiskey.

But the analogy isn’t perfect. “From fingerprints you cannot normally deduce what ethnic background you are, or what your height is, or how old you are,” notes Bunz.

However, with the technique of fluorescent fingerprinting, “you have more information than a pure fingerprint because whiskies of a specific age, of a specific blend status, and a specific country of origin all group together and form supergroups” when plotted on a graph, he says.

Therefore, the more whiskies entered into the system, the better the system becomes.

In total, the researchers tested 33 whiskeys of American, Scottish, or Irish origin. Each test used six different dyes to achieve a 99 percent accuracy rate. For each test, the scientists could run 32 samples concurrently and start analyzing the results 15 minutes later. The team also ran each sample six times to ensure reproducibility—a task with required a total sacrifice of only a milliliter of each whiskey!

Bunz says one of the strongest assets of fluorescence detection method is its ability to clearly identify a whiskey as having certain characteristics. With this method, “it is as if you put on glasses and then you see much more clearly.” He notes that with liquid or gas chromatography, “their discrimination is much more coarse and you cannot resolve the different groups.” The other methods also sometimes require long sample preparation times or more costly pieces of machinery, he says.

In the case of the fluorescence method, you pretty much just need a plate reader, the plates, and fluorescent dyes. Bunz estimates the machine to cost around 10,000 euros, while the plates and dyes only cost a few cents. A gram of each of the three most accurate dyes takes around a month to make in his lab—but it can then be diluted down to test around 200,000 samples.

The Scotch Whisky Association, which protects the international reputation of scotch, uses the Scotch Whisky Research Institute in Edinburgh to test that a product fits the legal definition of Scottish whisky, or scotch. To accomplish this task, the Institute uses methods including gas chromatography, high performance liquid chromatography, and mass spectrometry—several of the same methods Bunz says fluorescence detection prevails over.

However, the technique of fluorescence fingerprinting isn’t without its flaws.

It misclassified four out of the the 120 samples run in the study. Bunz believes this is because some of the whiskey characteristics still cluster together, making it a little difficult to tell them apart. But he believes that if you add in a few more dyes, this task will get easier.

Additionally, Bunz isn’t sure if they can create a master library of whiskey fingerprints. The team would need to run the experiments in a different lab to see how closely the results align. But if it works, this method has the potential to create up to several million unique fingerprints using just three dyes. The number would increase as you used more dyes to make the pattern.

In the end, Bunz is not sure whether the whiskey industry will adopt the new technique. However, he says that German juice manufacturer Sonnländer has already expressed some interest. The team will soon start experiments to see how well this fluorescent set-up works for the task.

In the meantime, “I basically have 30 different whiskeys at home,” says Bunz. “But I’m not a whiskey drinker. I’m a red wine drinker, so some of my guests are highly delighted when they see my collection.”