What do we know about dinosaur eggs?

These fossils can reveal a lot about how dinosaurs lived 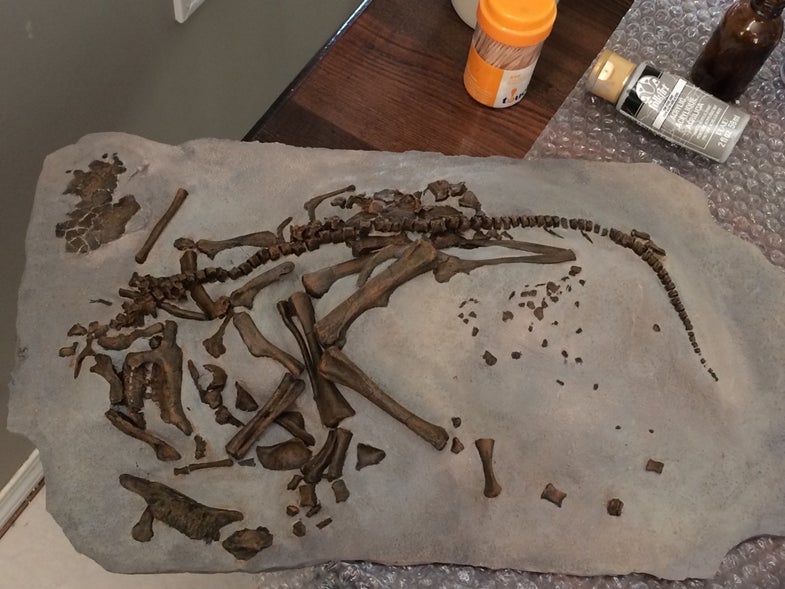 Some dinosaur eggs took a surprisingly long time to hatch, according to a study published Monday in the journal Proceedings of the National Academy of Sciences. By examining the teeth of unhatched dinosaur embryos, paleontologists determined that one species spent about three months incubating, while another spent six.

Fossils of dinosaur eggs might be common, but embryos are very rare. “Virtually nothing is known about their embryology,” coauthor Gregory M. Erickson of Florida State University, told the New York Times.

But dinosaur eggs can shed light on the creatures’ evolution, behavior, and how they went extinct. Here are six things we have learned from dinosaur eggs—and from the occasional lucky embryo. 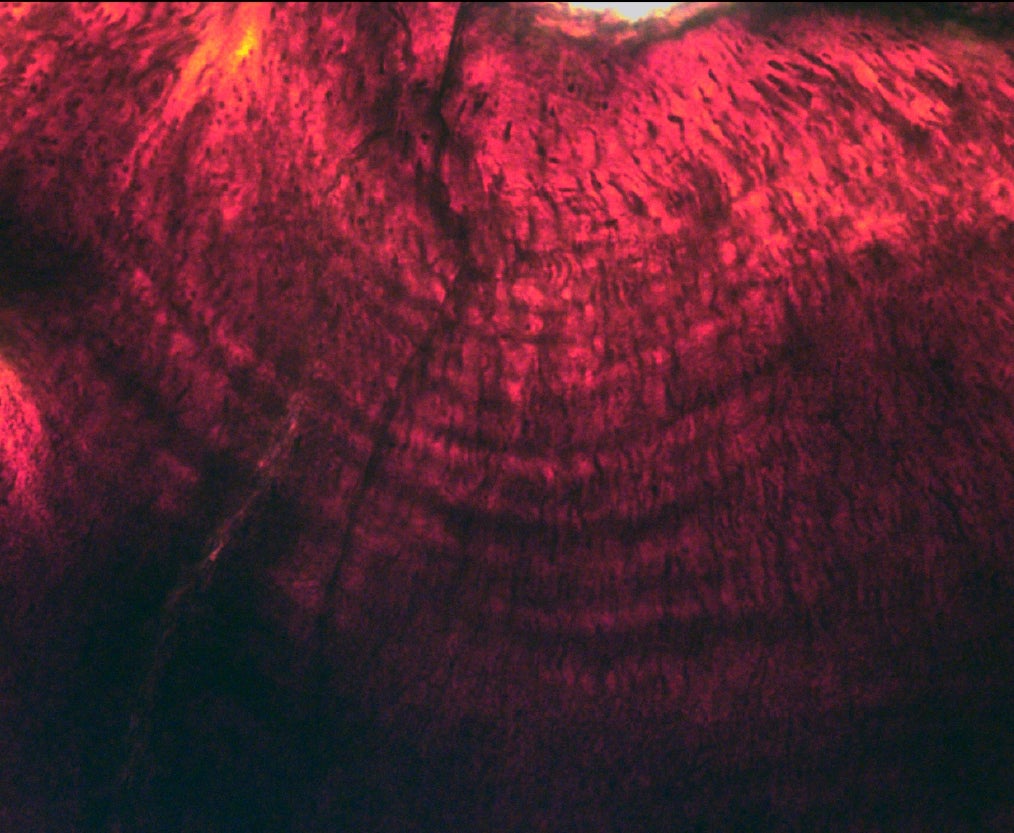 They incubated for a long time

Bird eggs take anywhere from 11 to 85 days to hatch. Paleontologists long assumed that dinosaurs would have similar incubation rates, because they are so closely related to modern birds. In the new work, Erickson and his colleagues examined embryos of Protoceratops andrewsi, a sheep-sized, horned dinosaur with relatively small eggs, and Hypacrosaurus stebingeri, a duck-billed dinosaur that reached about 30 feet in length in adulthood. The team discovered growth lines made by tissue called dentine deposited daily in the embryonic teeth. Counting the growth lines in the teeth let them gauge how long the embryos had been developing. Estimates from the embryonic teeth revealed that Protoceratops took nearly three months to incubate, and the duck-billed Hypacrosaurus six. This indicates that dinosaur eggs hatched at leisurely rates—more like reptiles than birds. Longer incubation times would have exposed eggs (and any parents guarding them) to predators, natural disasters, and hunger. The slow incubation times might even have played a role in their extinction after an asteroid struck Earth about 65 million years ago. Dinosaurs were less energy-efficient than cold-blooded reptiles and amphibians, and took at least a year to mature. Their eggs’ lengthy incubation may have made it even harder for dinosaurs to compete with rapidly reproducing birds, reptiles, and mammals. “Dinosaurs were basically caught holding bad cards—a dead man’s hand,” Erickson told Science. 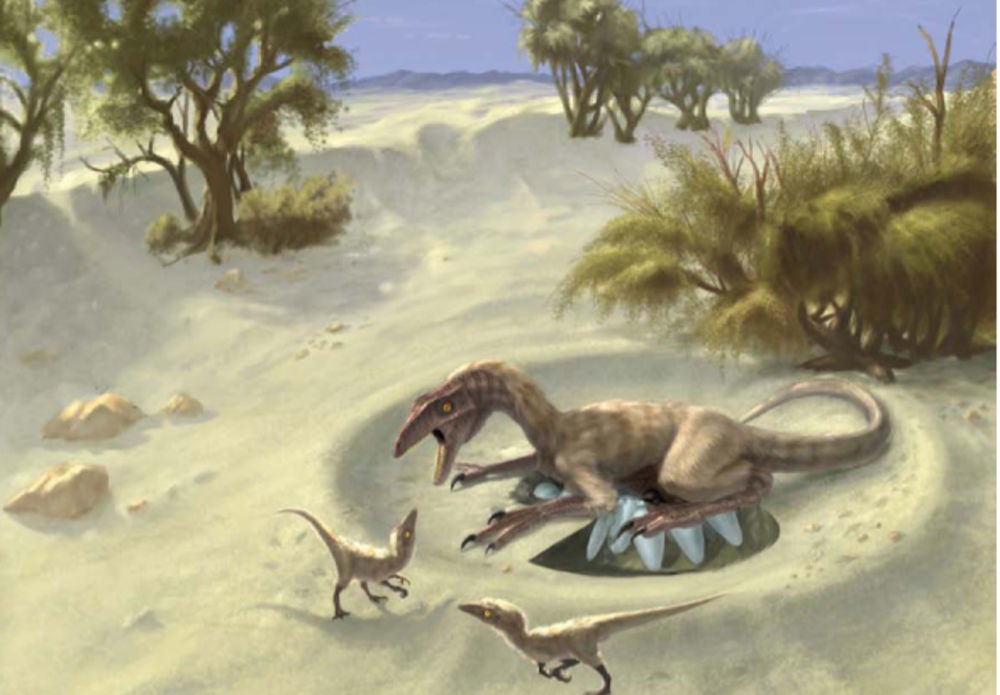 They show how mom handled the heat

Eggshells are full of the mineral calcium carbonate, and analyzing it can offer clues about whether dinosaurs were warm-blooded or cold-blooded—that is, whether they controlled their own body temperatures or relied on heat from outside their bodies. Researchers have zeroed in on a form of calcium carbonate made with carbon and oxygen atoms that carry a few extra neutrons, leaving it a smidge heavier. These isotopes are scattered differently in the eggshell depending on the mother’s body temperature. In colder conditions, the isotopes cluster together more. The team concluded that dinosaurs might have been somewhere in between warm- and cold-blooded. They might have boosted their body temperatures above the ambient air of their surroundings, but not as efficiently as modern birds do. 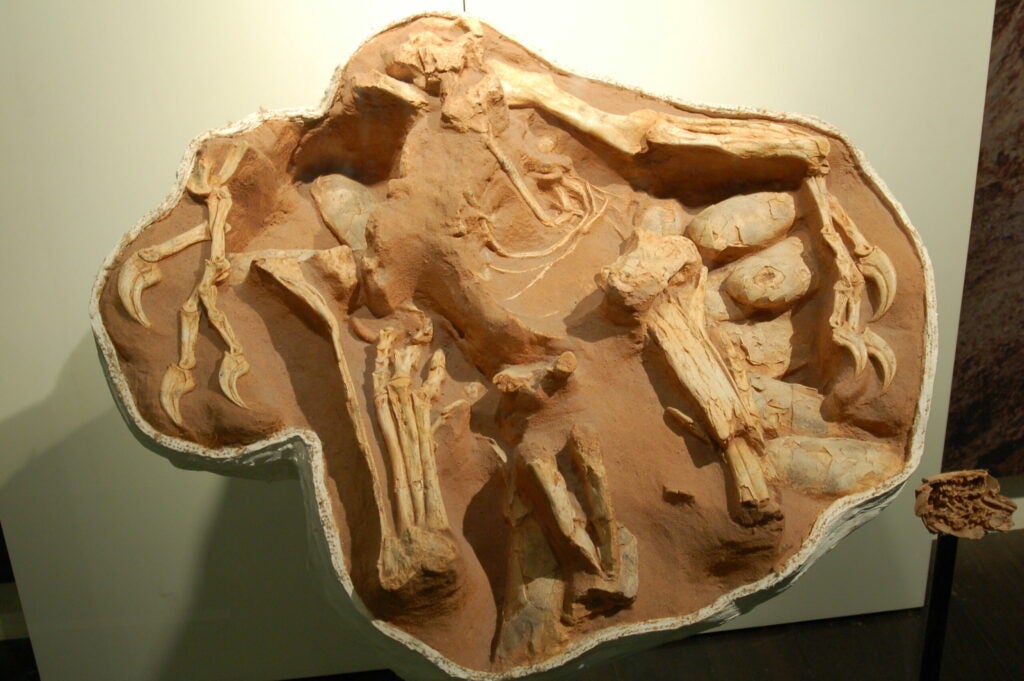 Some dinosaurs cared for their eggs and hatchlings, even sitting on their nests to keep them warm. Early evidence of parental care came from crushed eggshells mixed into a mass grave of duckbilled dinosaurs found in Montana. The eggs might have been trod on by hatchlings growing in the nest, suggesting that their parents stuck around to raise them. In one case, a rare embryo restored the honor of one misunderstood prehistoric parent. In 1923, a cache of dinosaur eggs thought to belong to Protoceratops were discovered in the Gobi Desert. Researchers also found bones from a beaked dinosaur that, they speculated, was stealing and snarfing the eggs. That dinosaur was dubbed Oviraptor, or “egg thief.” It wasn’t until the 1990s, when researchers found a new load of similar eggs, that paleontologists realized the Oviraptor was actually a devoted parent. One contained an embryonic Oviraptor skeleton, revealing that the eggs had not been stolen from a Protoceratops parent. The Oviraptor ID’d by researchers in the 1920s had simply been tending to its own nest. Oviraptor’s name hasn’t exactly been cleared; it still literally means “egg thief.” But its reputation has improved. Now evidence shows that closely-related species sat atop their nests, sheltering their eggs with their arms. One has even earned the title “Big Mamma.” 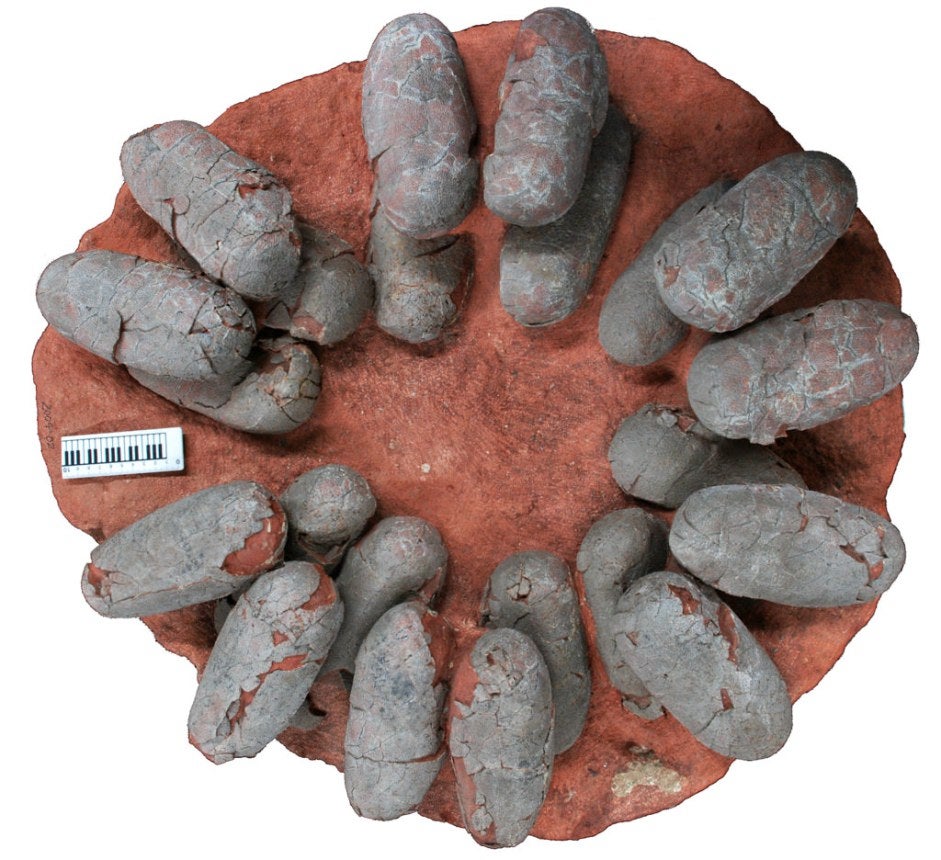 Sometimes they were blue

Dino eggs varied in shape, size, texture, and even color. Some dinosaurs laid their eggs in a fetching blue-green hue. Researchers have detected two pigments, biliverdin and protoporphyrin, in fossilized eggs from the oviraptorid Heyuannia huangi in China. That suggests the eggs were likely a blue-green color that was less visible than white and camouflaged them among leaves. Parents may have laid them in open nests and watched over them instead of sitting atop their charges. This color choice would also have made the eggs unique. Parents might have relied on this distinctive hue to spot imitations snuck into the nest by charlatans, like modern robins do. 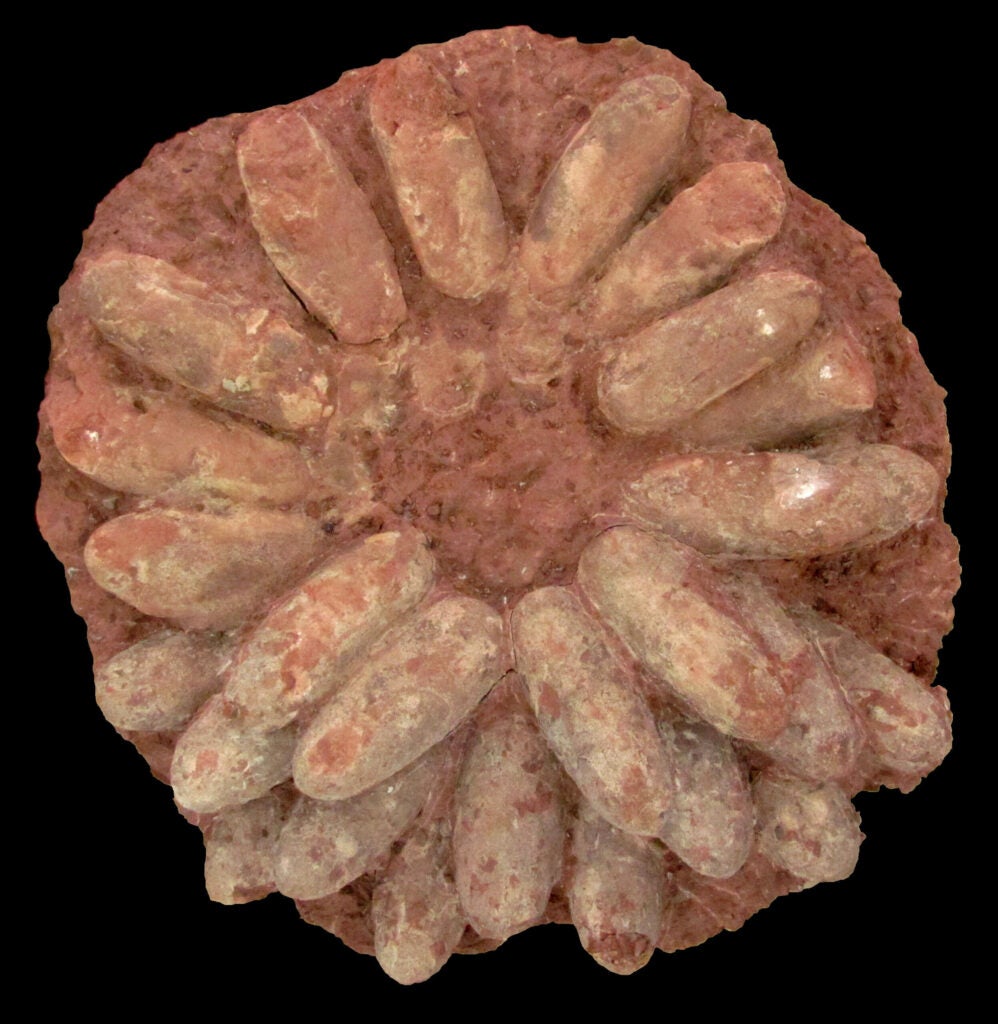 Most of them were buried

Eggs are dotted with pores that allow gases such as oxygen, carbon dioxide, and water vapor to pass between the embryo and its surroundings. Researchers have studied the size and number of these pores to figure out what kind of nests dinosaurs used. It turns out that most of the 29 species of dinosaurs examined in this regard probably buried their eggs, not unlike the practices of modern crocodiles. These dinosaurs would have relied on the warmth of decomposing plants and sun-baked soil to keep their eggs toasty. Their eggs were rather porous, probably to make up for limited airflow in the confined dirt and plant matter. However, a few theropods likely laid eggs in open nests, more like modern birds (which makes sense, as this group is also the most closely related to birds). Their eggs had fewer, smaller holes. Researchers think that egg burying was a more primitive nesting style, while open nesting was introduced later (initially, brooding dinosaurs may still have partially buried their eggs). Using body heat to keep eggs warm might have freed open-nesting dinosaurs from having to incubate their eggs in the ground, where they would have been vulnerable to predators, floods, and torrential rainfall, the researchers wrote. This could have allowed dinosaurs to move their nests into trees, cliffs, and caves. 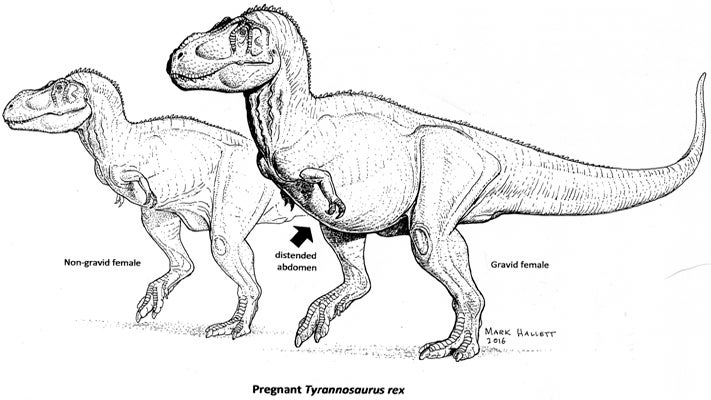 They can make it easier to ID a female dino

Dinosaur eggs can even—indirectly—help researchers figure out an adult fossil’s sex. Whenever a dinosaur laid eggs, she temporarily produced a type of tissue called medullary bone to line the marrow cavities in her bones (the same is true of modern birds). It offered a ready supply of calcium that the expectant mother could use in eggshells. Recently, paleontologists confirmed that a Tyrannosaurus rex thighbone fossil contained medullary tissue, indicating that its owner was pregnant. The finding could help paleontologists get better at determining the sex of the dinosaur fossils they study, which has proved surprisingly difficult in the past. No fossils were harmed in the making of this science; the bone was already broken. But in the future, CT scans could help paleontologists determine which fossils to probe for medullary bone. And once a few dinosaurs are confirmed to be female, paleontologists could come up with other sex-related traits to look for in fossils.
Kate Baggaley