Why an Artist is Growing Space Lettuce 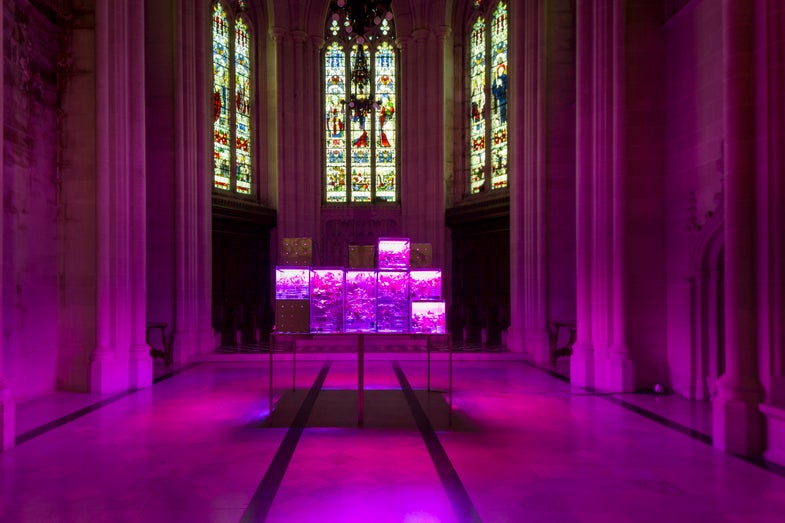 In the back chapel of the Cathedral of Saint John the Divine, an artist is growing space lettuce. Light filters through the stained glass windows, mixes with the glow of LEDs, and bathes trays of peas, beans, strawberries, and tomatoes, and lettuce. For Suzanne Anker, the artist behind the installation, called Astroculture, the plants signal an alternate method of growing food, one that she believes will become commonplace in the future.

Her gardening technique, she says, dispels the myth that healthy food requires prodigious sunshine and acres of land. Anker grows her greens in purple light that plants absorb more efficiently than sunlight.

“You, in your small dark apartment, can grow fresh vegetables,” says Anker. All her setup requires are crates and plant dishes from a plant nursery, red and blue LED strips, seed packets, and soil. The 31 crates in the installation cost less than $100 each.

Anker has based her do-it-yourself indoor garden on the Veggie System developed for the International Space Station. This spring, brick-shaped plant “pillows” were sent to ISS to study how vegetables might grow in space. The pillows contained growth media rich with nutrients and ‘Outredgeous’ romaine lettuce seeds. Water was added to the pillows on the station, which were then placed inside a bellows system to control the climate around the plants. In August, the astronauts sprinkled their space-grown red romaine lettuce with citrus, olive oil and balsamic vinegar and ate their first space salad.

Technologists are increasingly interested in bringing agriculture indoors, and not just in space. The MIT Media Lab has a project called CityFarm, which is trying to make controlled environments as efficient as possible for agriculture. Growing Underground runs a farm inside an abandoned London Tube tunnel. And Freight Farms turns cargo containers into mini-farms that are climate controlled, stacked, and tailored for specific crops.

Anker has been playing with the concept of Astroculture since 2009. She was inspired by the WunderKammer, or cabinet of curiosities, for her work. One of the world’s foremost bioartists, she has been experimenting with the tools and techniques of science to create art since the 1980s.

Unlike the astronauts though, Anker hasn’t yet sampled her crop. So far, none of her exhibits have lasted long enough to grow edible plants. Assuming her plants make it through winter in the drafty halls of the cathedral at the Value of Food exhibition, which lasts through April 3, she’ll get her first taste.

[Suzanne Anker’s class at School of Visual Arts in participating in the Biodesign Challenge this coming spring semester.]