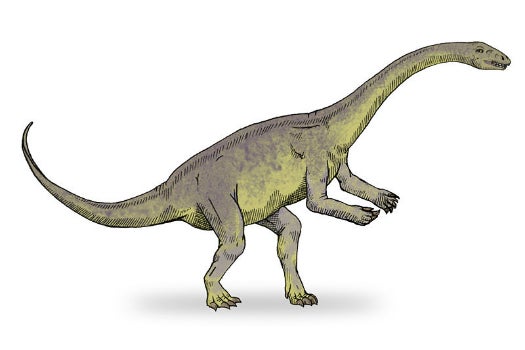 During the Jurassic Period, nearly 200 million years ago, a dinosaur called Lufengosaurus roamed what is now the Yunnan Province in southern China. The long-necked plant eater was the biggest guy around at the time, at almost 30 feet long, and new research suggests it grew faster than all other known dinosaurs and living birds.

Because, as you might imagine, the fossilized embryos of dinosaurs are somewhat difficult to stumble upon, we haven’t known much about how they developed. With the recent discovery of a collection of eggshells and embryonic Lufengosaurus bones in various stages of development in a bone bed in Yunnan, an international team of paleontologists has been able to piece together an unprecedented amount of information about how these creatures developed within the egg. The team, led by Robert Reisz from the University of Toronto Mississauga, published their findings in [Nature today.

The discovery site is thought to be a collection of multiple Lufengosaurus nests that were destroyed by flooding around 190 million years ago. The researchers found 200 bones, though no uncrushed eggs or nests remained.

The widely varying sizes of femur bones found suggest that these dinosaurs grew rapidly before they even hatched—”faster than anything we have ever seen,” according to Reisz. He told Nature that Lufengosaurus’s rapid growth rate, both during its short incubation period and likely after, probably helped them survive by outgrowing any potential predators.

The fossils are the oldest dinosaur embryos ever discovered (by about 100 million years, David Evans of the Royal Ontario Museum told Nature). Bone-tissue samples from the site contained what could turn out to be the oldest organic material ever found in a terrestrial vertebrate, what Reisz thinks may be preserved collagen.