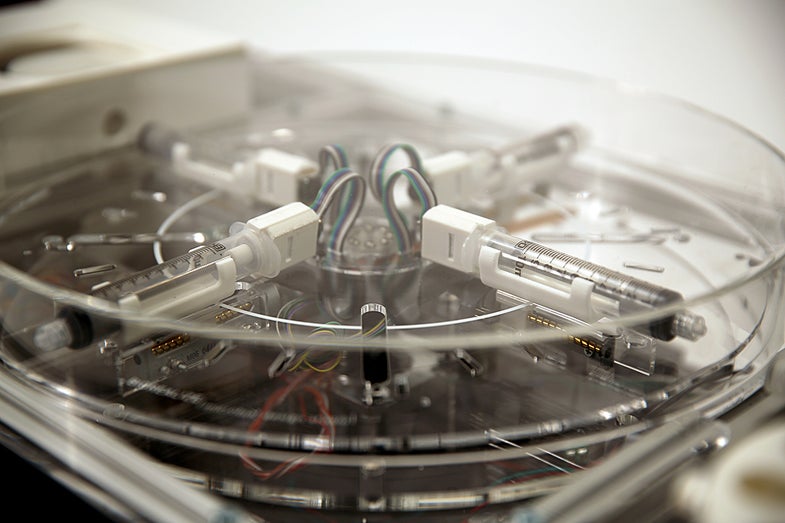 The momentum of developments in bioengineering has left life scientists breathless. CRISPR, the gene editing tech that has been adopted almost universally among biotech labs, has been stealing all the headlines with talk of designer babies. But behind the glitz, a steady stream of software, services, and machines have been coming out that make genetic engineering easier, more reliable, and more automated. The latest innovation comes out of a collaboration between a biologist, a designer, and an engineer at University of Pennsylvania. They created a desktop machine that automates genetic engineering—no hands required.

“You can hit play and just get your product out at the end,” says Karen Hogan, co-inventor of the Biorealize Microbial Design Studio and biology lab coordinator at UPenn.

The machine looks like a DJ turntable. But instead of records, it spins a wheel of syringes containing genetically engineered microbes. The machine works like an assembly line. First, it zaps the microbes with more than 200 volts of electricity to make them more amenable to genetic engineering before injecting in new DNA. The microbes are then incubated in the syringes. As a final step, the proteins the microbes produce can be extracted from the slurry.

The last step, the protein extraction, begins to fulfill the biotech dream of the chemical brewing “bread machine.” For the past decade, synthetic biology pioneer Drew Endy has described a machine containing modified microbes that could dispense any chemical—from dishwashing detergent to tylenol. Microbial Design Studio takes a step toward realizing that vision where users can insert cartridges containing microbes into the machine and later collect useful chemicals at the other end.

Before the Studio ever enters homes, the team expects labs to adopt it. The Studio is small enough to sit on a desktop and can run eight experiments at once with varying chemical recipes and DNA designs. Scientists can even stack machines like bricks to automate massive numbers of experiments simultaneously, says co-inventor Orkan Telhan, a design professor at UPenn.

“The automation saves a lot of time so you can focus on your design instead of moving liquids from one place to another,” he says. Telhan imagines entire rooms of these machines chugging away like computer servers to power through high-volume or long-term experiments.

The Studio belongs to a rapidly developing landscape of tools that opens bioengineering to new disciplines and could pave the way for a host of new biotech applications.

The Biorealize team expects to begin selling machines in the next two years at a range of prices. Schools and hobbyists could buy a basic version for just a few thousand dollars, while scientists could buy a fully tweaked version at premium. “Think of it as a personal computer for biology,” says Telhan.