When different species of worms mate, it doesn't end well. 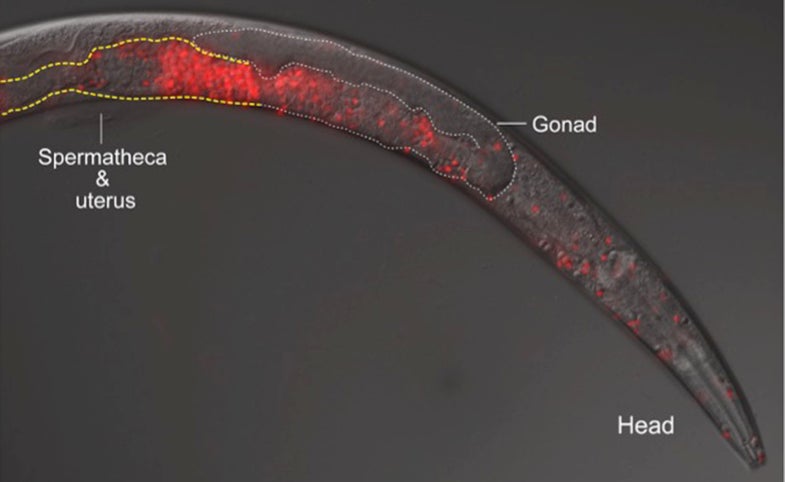 Every so often, animals looking for love will color outside the lines, taking a mate that doesn’t exactly share their own genetic code. Such inter-species pairings can produce some pretty cool animal hybrids, like the popular liger or the brown and white “grolar” bear.

But not all of these colorful couples result in a happy ending – especially if you’re differing species of worm. For female nematodes, hooking up outside the genetic family tree can end in a pretty grisly demise.

And the cause of death? Killer sperm.

A new study published in PLOS Biology details the dangers of interspecies mating among nematodes, which are super tiny un-segmented worms. When researchers mated differing nematode species in the Caenorhabditis genus, they noticed that many of the females became sterile and had much shorter lifespans than usual.

To figure out what was up during the mating process, the researchers used a fluorescent dye that allowed them to observe the worms’ sperm during transfer. They discovered that the foreign sperm broke through the females’ uteruses and fertilized their eggs while they were still in the ovaries. (Fertilized eggs can’t develop unless they’ve moved to the uterus.)

Then the rogue sperm typically destroyed the ovaries and continued onward in their “sperm invasion,” further damaging other organs and sometimes killing the female.

The experiment provides a good example of how animals evolve to make sure that their sperm will get to an egg no matter what. Yet in these two types of worms – which look pretty much identical – their two strategies have diverged rather drastically, with one type of sperm becoming much more forceful than the other.

It also may explain how the different species stay separate, as the study found that females may avoid mating with worms that have more aggressive sperm. Can’t say that I blame them.