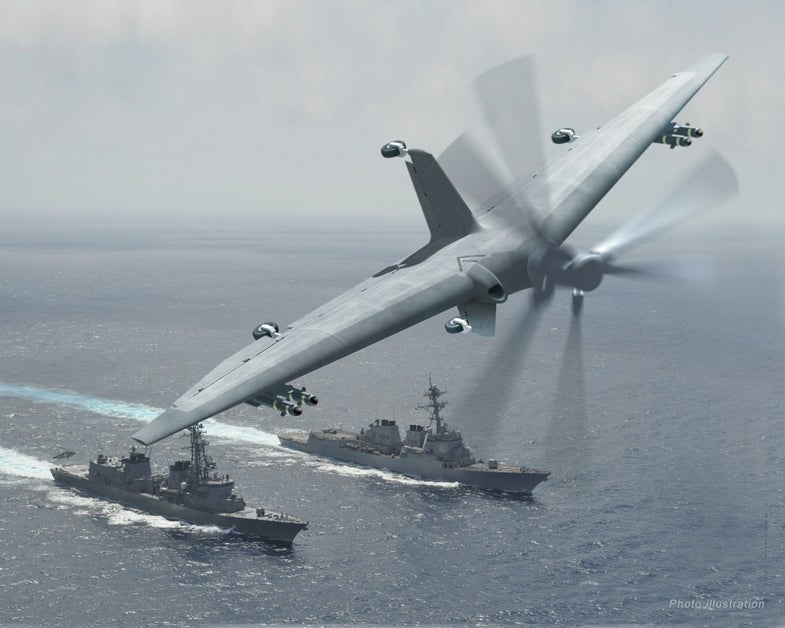 Aircraft carriers revolutionized naval war. Before carriers, giant battleships defined naval battles, their powerful cannons threatening other vessels and coastal cities alike. Then came the aircraft carrier, a floating runway and hangar that could launch planes far away from land, at targets well beyond the range of a ship’s cannons, sinking enemy vessels far beyond the line of sight.

It took a few decades to realize this impact, but once naval planners took it in, battleships were sunk for good. Now, DARPA wants to expand the aircraft carrier revolution by developing a small drone that can take off and land even on small ships. This would give reach and power not just to dedicated giant naval vessels, but smaller escorts too.

Dubbed TERN, for “Tactically Exploited Reconnaissance Node,” the drone is a tail-sitter on land or decks, meaning the body takes off and lands like a helicopter, but turns 90 degrees once airborne to fly like a plane. It’s a medium-altitude long endurance vehicle, helpfully acronymed as MALE, just in case their were any doubts about this robot’s gender. Two counter-rotating propellers on the nose provide first lift then thrust, and the body would be a flying wing. When not in use, the TERN would nest securely inside the ship.

DARPA just awarded Phase III funding to Northrop Grumman for this project, with the aim of building a full-size demonstrator that can takeoff at sea, transition to and from horizontal flight, and land from a small platform, like that available on a destroyer or other small combat ship (but not, yet, from a submarine). This makes it markedly different from the last naval drone to make big waves, the X-47B unmanned combat aerial vehicle, which took off from an aircraft carrier’s runway.

We don’t yet know if the TERN program will work, but future ships are already incorporating it into their designs. The Navy’s high-tech Zumwalt destroyer, which went to sea for the first time this month, has a rear landing pad for either two helicopters or several smaller drones. The T2050, a British concept for the ship of the future, features a large drone landing pad and lots of small drones.

AIrcraft carriers changed war by expanding the reach of the biggest, deadliest ships. If the TERN works, it could usher in a second age of aircraft carriers, where all but the tiniest boats in the Navy can launch planes of their own, scouting places and striking targets in distances far greater than the ship’s humble bodies suggest.