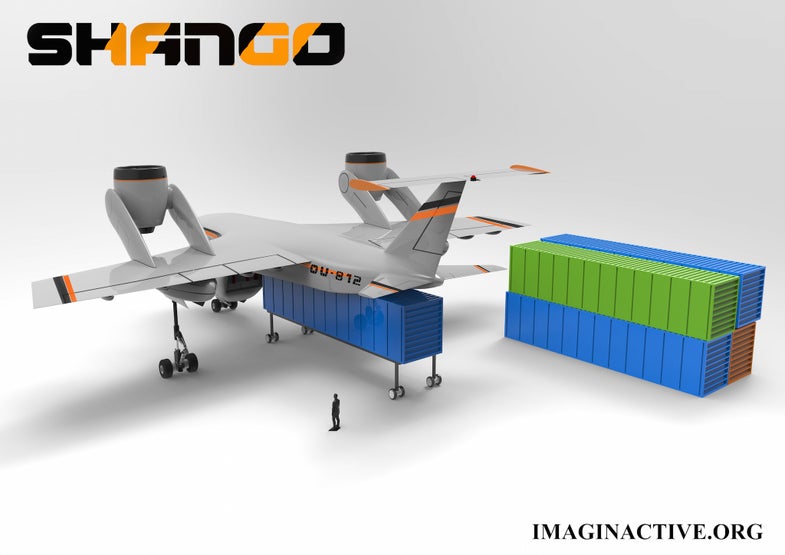 Shipping drones capture the imagination unlike almost any robot. We see visions of skies filled with small robots, worrying and planning for the day packages that come by aircraft directly to our doorstep Yet most drones can’t really carry all that much, and are built for cargoes of around a few pounds. To truly compete with, rather than just supplement, other delivery technologies, drones will need to go bigger.

Charles Bombardier’s Imaginactive nonprofit puts out concepts and gets people to design vehicles for them. Sometimes the machines are fanciful, like this hypersonic airliner. Other times, they feel much closer to practical. “Shango,” a concept from April, imagines a drone that can carry shipping containers, the kind which revolutionized transport, carry billions of tons of cargo across the world, and became a staple of trendy green living.

The plane, as envisioned, would tilt its engines to land and takeoff vertically, and leave them level in flight for maximum thrust. The container would sit behind a smoother, aerodynamic nose.

It’s not a bad concept, but it could be done better. Today in The Globe and Mail, Bombardier discussed an improved variation on the design, which turns the contianer carrier from a traditional plane body to a giant quadcopter.

Crafted by Bombardier and retired Canadian air force pilot Tom Hobbs, the concept was turned into images by India-based designer Abhishek Roy. I like the latch-on/release model of this one, which I could see picking up crates from trucks and putting them on ships, or flying across difficult terrain and up mountains for difficult deliveries. There’s a lot of technical hurdles to clear first, but the design is neat enough that I’d love to see someone attempt it.

Check out the full concept at The Globe and Mail.