The Warship To End All Battles 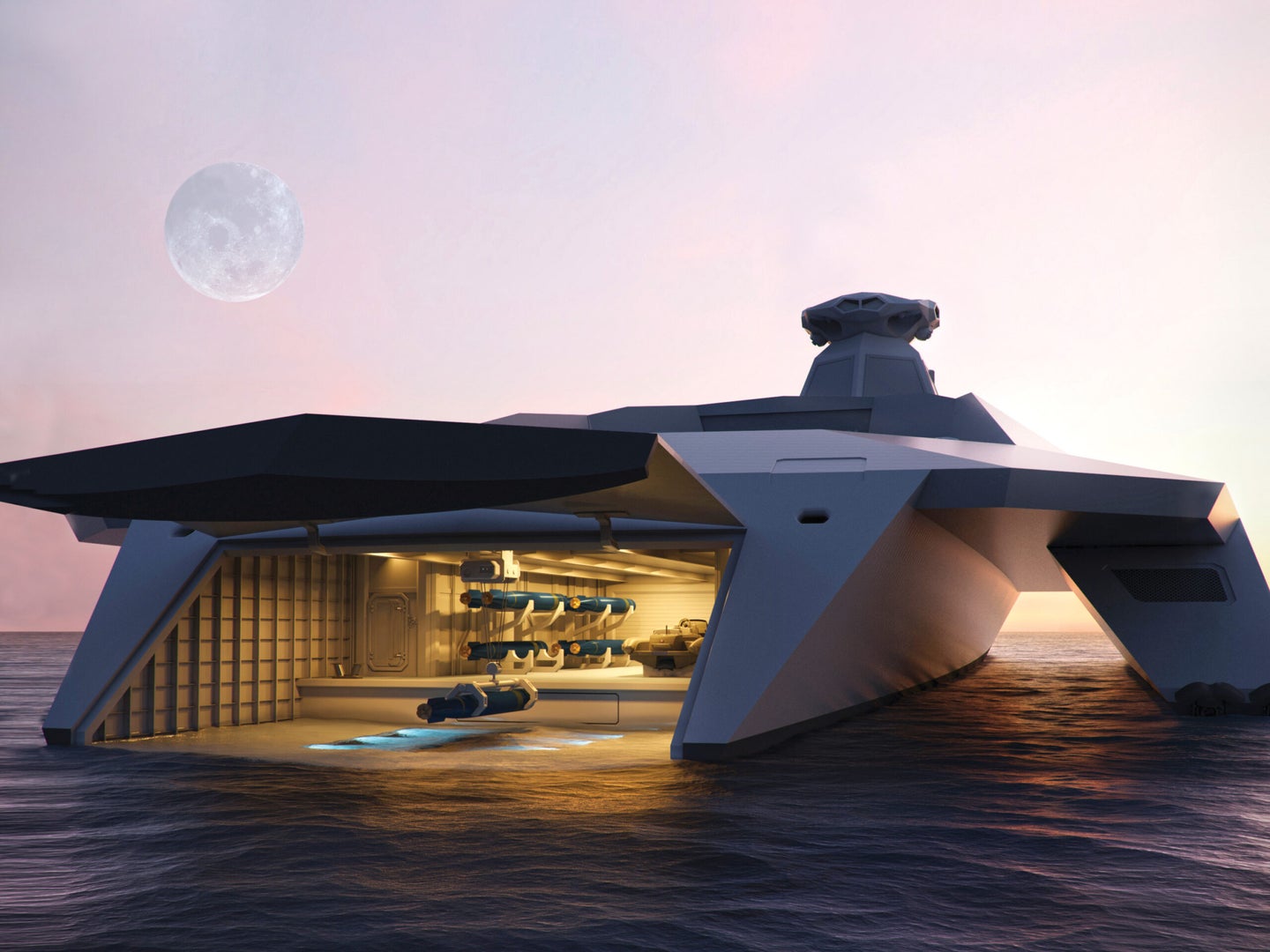 In 1906, the Royal Navy rendered all other battleships obsolete when it unveiled the HMS Dreadnought: a steam-powered fighting vessel with 12-inch guns and cement-reinforced armor. This past summer, British naval engineers revealed a vision of its successor, the Dreadnought 2050.

The stealthy, semisubmersible ship is designed to move agilely around a battle zone and remain flexible in any type of mission, says Mark Steel, a manager of the Combat Systems Team at BMT Defence Services, a naval design firm involved in the project.

The battleship could function with a crew as small as 50, as opposed to the usual 200. It would serve as a mobile command center, unleashing and directing armies of drones, missiles, and rovers. “Robotics allows us to operate the ship at range to keep people out of harm’s way,” Steel says.

Here are its components:

The moon pool—a floodable dock area at the ship’s stern—would allow for the rapid deployment of unmanned underwater rovers or Royal Marine divers.

An extendable flight deck and hangar would enable the launch of remotely piloted drones, many of which could be 3-D-printed on board.

Above the ship, a hovering quadcopter would provide 360-degree visibility. Its sensors could capture emissions at frequencies across the electromagnetic spectrum to detect enemy ships. A cryogenically cooled tether made of carbon nanotubes would transmit energy from the ship to keep it flying. Also, the quadcopter could be equipped with lasers that could take out close-range threats, such as enemy missiles, craft, or pirates that have slipped past the ship’s other defenses.

The ship’s hulls would be made of ultra-strong acrylic coated in graphene (the material’s hydrophobic properties cut down on drag). “Smart windows” would change to translucent when a certain amount of voltage is applied, allowing unobstructed views of close-in operations.

To propel the ship, a fusion reactor (or, if that fails to materialize, highly efficient turbines) would drive silent electric motors. Dreadnought would also be the first surface fighting ship able to use ballast to lower parts of the ship below water, making it harder to detect with radar or infrared.

Inside the Dreadnought’s control room, commanders could zoom in and out of battles using a holographic command table. This would offer a 3-D view of a battle in real time from any vantage point—in the air, on the ocean’s surface, on land, or even underwater.

First, the ship would be armed with hypersonic missiles capable of knocking out would-be attackers.

Second, it would have super-cavitating torpedoes. These rocket-propelled weapons move so fast, they vaporize the water around them to create a nearly frictionless air bubble. These could pursue enemy ships at speeds of 300-plus knots.