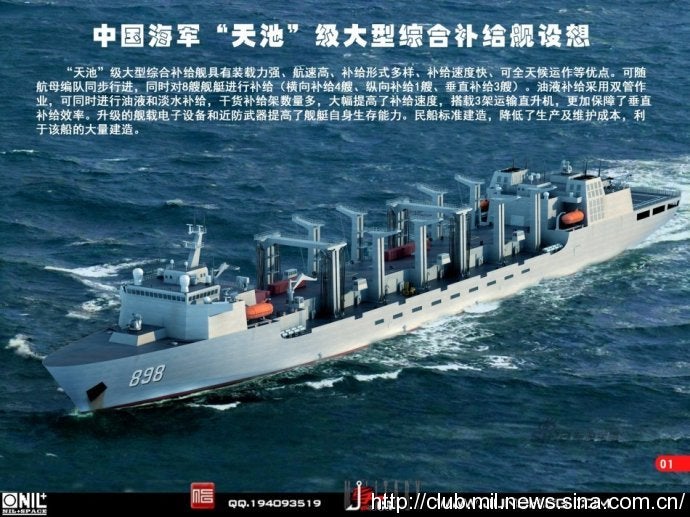 The bridge of the first Type 901 takes shape in the Longxue shipyard. As China’s first large, domestically built naval resupply ship, the Type 901 will replenish aircraft carrier groups on the high seas.

The Chinese Navy is getting ready to accept the first in a class of fast, giant resupply ships that will refuel, resupply, and rearm its aircraft carriers and destroyers on the high seas. The Type 901 class is being built at the Guangzhou Shipyard International (GSI) Longxue. Thirty-one-and-a-half meters wide and over 200 meters long, the first Type 901 class supply ship will have a full displacement of around 40,000-45,000 tons. That’s a similar size to the U.S. Navy’s 49,000-ton Supply class replenishment ships, which can carry over 17,000 tons of jet and ship fuel, and 1950 tons of ammunition.

The raised platform forward of the Type 901’s bridge could carry a self defense weapon like a TYpe 730 or 1130 gatling CIWS. China could also fit its supply ships with long range anti-ship or air defense missiles.

The Type 901 is thought to have 4 gas turbine engines, which would give it a top speed of around 25 knots, enabling it to keep pace with Chinese aircraft carriers like the Liaoning. It will have up to five resupply gantries located midship, each of which can deploy palletized ammunition and supplies via cables, or fuel lines. This will allow the Type 901 to replenish multiple warships simultaneously while under sail, a key capability for modern navies. It will also be able to operate helicopters and drones from its helipad and hangar. While not a combat ship, it is expected, like US Navy ships, to carry some weapons for self-defense, most likely 30mm auto-cannons used in an air defense, anti-missile role.

The Type 901’s exhaust funnels are arranged on the axis of the ship’s keel. It has enough power to keep speeds of 25 knots, which is enough to keep up and refuel aircraft carriers, and other fast warships.

The Type 901 will offer a great leap in capacity over the current 25,000-ton Type 903A Qiandaohu, of which the PLAN has eight. The Type 901’s larger supply carrying capacity means that it can refuel and rearm Chinese warships, including destroyers and carriers, in combat operations far from the Chinese mainland. Also, its larger size gives the Type 901 a greater range than its predecessor, thus reducing the need for foreign facilities to refuel and replenish, both for the Type 901 and the warships it supports. While China’s interest in building long-range carriers, destroyers and submarines and leasing foreign bases (like Djibouti) are getting a lot of attention, Beijing is also clearly at work solving the logistics challenges needed to make the PLAN a true global power.

Thanks to Blitzo for noting that the 901 uses gas turbine, not steam, engines.