It can snag unmanned aerial vehicles that weigh as much as 1,100 pounds. 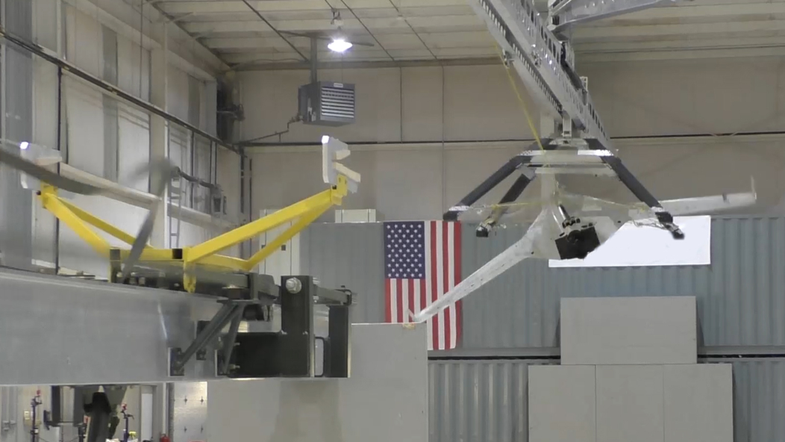 In an test from December 2016, the SideArm landing system catches a Fury drone, made by Lockheed Martin. DARPA
SHARE

The laws of physics dictate that aircraft carriers have to be giant targets. Fixed-wing planes, faster and more efficient than their helicopter brethren, need runways to take-off and land, and those runways have to be long enough for the plane to generate lift before it’s hurtled (with catapult assistance) out over the sea and into the sky. What if the Navy wants to put a fixed-wing drone on a smaller ship, without the space for a full runway? Enter “SideArm,” a robot arm that fits in a shipping container and can snag a drone right out of the sky.

Developed for DARPA, the Pentagon’s future projects wing, SideArm is a runaway and landing strip for drones, all combined into a rail, arm, and net designed to be mounted on the back of a ship much smaller than an aircraft carrier.

DARPA boasts that the system can snag a “full-size” drone, but don’t expect it to catch any Predators. SideArm can snag a drone as heavy as 1,100 pounds, which means it’s not quite strong enough to catch the plane-sized Predator or its larger siblings.

There already exist rail-and-hook systems to catch small and medium-sized drones like the ScanEagle. In those systems, the drone deliberately flies into a tall net, halting its momentum. DARPA’s experimented with alternative landing and launching systems before, like this quadcopter-launching body and sky hook, with modest success. With SideArm, the hook snags the drone along a rail and the top net slows it gradually, reducing the wear and tear on the vehicle itself. And SideArm isn’t just for ships: DARPA envisions the system as one that can fit inside cargo planes or on the back of trucks, letting any part of the military use it to launch and catch drones, wherever they fight.

Still, SideArm is primarily a project for the seas. It’s part of DARPA and the Office of Naval Research’s larger Tactically Exploited Reconnaissance Node (TERN) project, which wants to put medium-sized scouting drones on smaller ships, getting the benefit of airborne surveillance of the sea without the limitations of helicopters and without requiring each ship to sport a full, carrier-sized runway.

Watch the SideArm in action below: