So What Are These ‘Artificial Preservatives’ That McDonald’s Is Nixing?

We took a close look at the ingredients 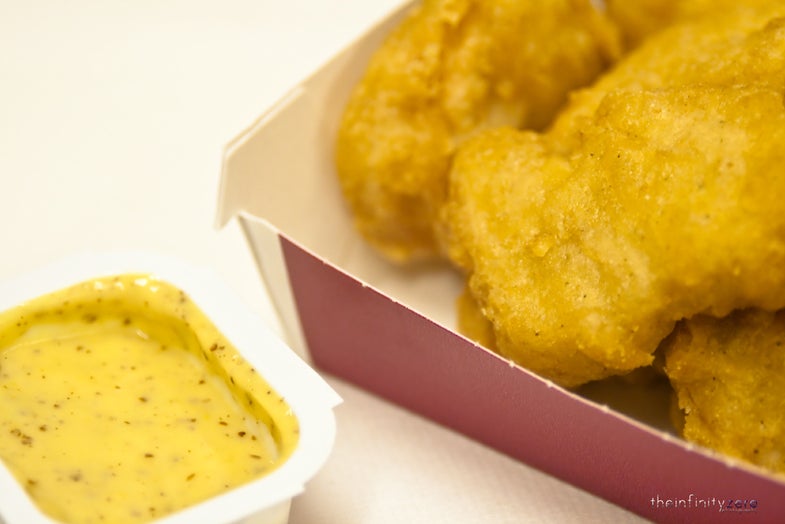 McDonald’s announced on Monday that it’s scrapping the artificial preservatives from its Chicken McNuggets. That definitely wasn’t enough info for us; what were the preservatives, and how did they work in the first place?

Preservatives keep food from oxidizing (going rancid), growing bacteria and going through other natural chemical processes, according to an article written by Louisa Dalton for the American Chemical Society’s Chemical and Engineering News publication back in 2002. Some chemicals even prevent food from changing color. These preservatives are all non-toxic in small quantities, but some folks have concerns about the long-term effects. Hot dogs, for example, contain nitrates and nitrites, which might increase your risk of getting cancer.

The U.S. Food and Drug Administration codes don’t specifically differentiate between “natural” and “artificial” preservatives. Instead, they use the term “chemical preservative,” defined as “any chemical that, when added to food, tends to prevent or retard deterioration,” except for “salt, sugars, vinegars, spices, or oils extracted from spices, substances added to food by direct exposure” to wood smoke, “or chemicals applied for their insecticidal or herbicidal properties.”

After some sleuthing, McDonald’s spokesperson Becca Hary confirmed and corrected our guesses about the following chemicals that will no longer appear in your McNuggs.

Sodium phosphates are a class of chemicals that can work alongside other salts to prevent fats and oils from going rancid, according to a paper published in the Annals of the New York Academies of Science. Sodium phosphates also prevent a metallic taste from arising in the meat, and “protect the color and flavor” by binding to any metals floating around the nuggets. Finally, in some cases they keep water in the meat, which could prevent any proteins from changing shape during frozen storage, according to a chapter by Juichiro J. Matsumoto in the book Chemical Deterioration of Proteins.

Some sodium phosphates happen to make good anti-constipation drugs in much higher doses. The FDA says that in poultry products, sodium phosphates can only make up 0.5 percent of the total product, around .32 grams for a 64 gram serving of nuggets, versus more than 20 grams for a single laxative dose. Still, it’s probably comforting to hear that this preservative won’t be in your nuggets anymore.

Some phosphates, like monocalcium phosphate and sodium acid pyrophosphate (SAPP), will still appear in the McNugget’s breading. These chemicals aren’t preservatives, but leavening agents that crunch up the breading and in the case of SAPP, protect the color.

Citric acid is actually a surprising thing to cut from any processed food; Jennifer Dominguez, manager of Michigan State University’s meat lab, agreed with me that citric acid is hardly “artificial,” though it’s definitely a “chemical preservative” by the FDA standard. Citric acid is what makes lemons sour and makes the foods it’s added to more acidic. “More acidic” basically means that there are more positive electrical charges called protons floating around in the food; bacteria can’t grow in these acidic environments. The preservative isn’t really leaving, though; the new McNugget’s recipe calls for powdered lemon juice instead, which still contains citric acid.

Citric acid is safe as a food additive, and it’s a popular preservative for canning. The FDA doesn’t even care how much goes into your food, and if I had to choose between lemon juice and bacteria, I’d choose lemon juice.

Tert-butylhydroquinone, or TBHQ, was cut from the oil that McNuggets are fried in. TBHQ is an antioxidant, meaning that it too prevents the oil from going rancid. The FDA generally regards the chemical as safe in food, but only in very tiny doses. The amount of antioxidants including TBHQ in food has to be less than .02 percent times the amount of the food’s total fat and oil content. Higher doses of TBHQ can be a problem. “There have been reports of vision disturbances in individuals exposed to this chemical” according to the National Institute of Health’s Toxicology Data Network. TBQH (“to be quite honest” in textspeak), cutting TBHQ is definitely a welcomed change.

While McNuggets are receiving an ingredient makeover, there are lots of preservatives that will stick around in other foods simply because, well, food spoils unless you do something about it. That includes sorbic acid in the cheese, potassium sorbate in the pickles, and calcium propionate in the buns. The acid and two salts are all recognized as safe by the FDA, and exist in food to prevent mold, yeast or bacteria from growing, in quantities far smaller than would be toxic.

So… does anyone want to go get some McNuggets with me today?