Why Does a Rocket Need to Roll Going Into Orbit? 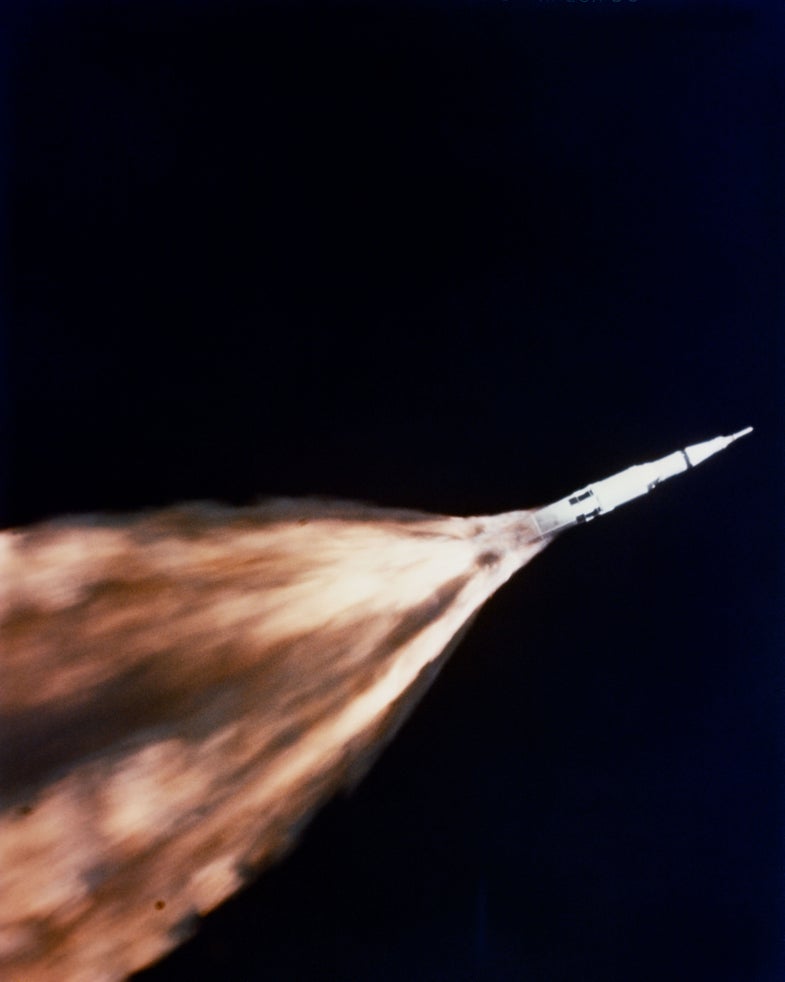 By the time the Sun rose a little after 7 o’clock in the morning on December 21, 1968, people were already gathered on beaches and stopped on backroads near NASA’s Kennedy Space Centre. The crew of Apollo 8 was already strapped into their command module, and as sunlight spread over the scene the launch countdown moved steadily forward. The voice over the loudspeaker told the crowds that the guidance computer was making its final checks for the flight azimuth, then, at T-minus eight seconds announced that the ignition sequence had started. At 7:51 that morning, the Saturn V lumbered off the launch pad, gaining speed as it climbed higher. Fourteen seconds later, commander Frank Borman called “roll and pitch program.” Astute viewers would have seen the rocket rolling around its vertical axis and wondered why – the rocket looked symmetrical, so why did it have to roll before pitching over into orbit? Those observers would have asked themselves a very interesting question. 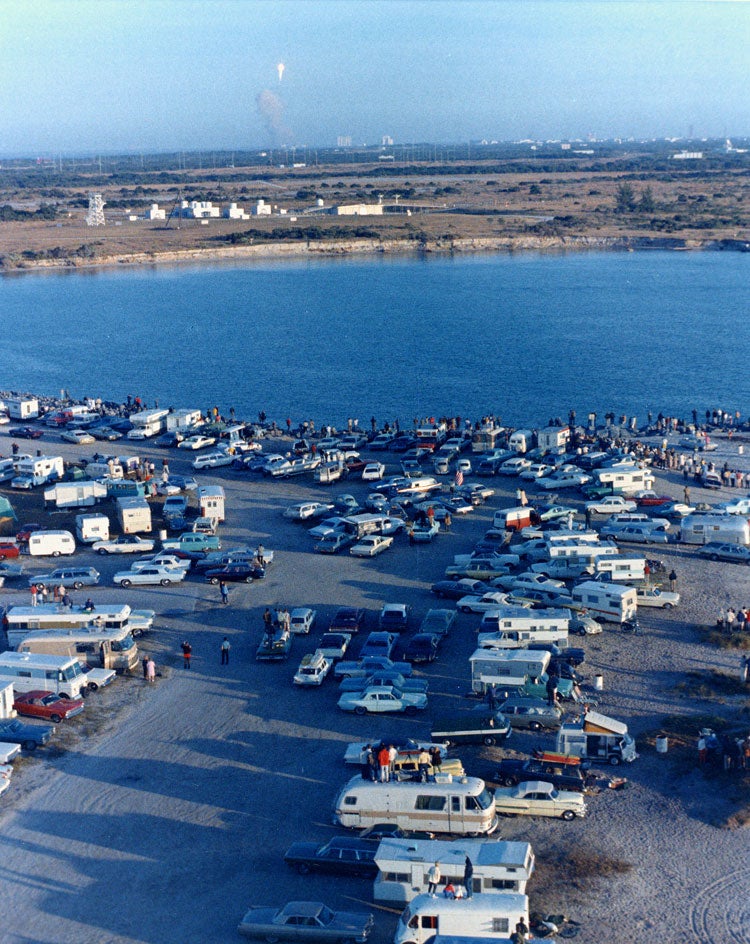 Crowds gathered to watch Apollo 8 leave the Earth for the first manned mission to the Moon.

To understand why the Saturn V had a roll program, we have to start where its journey began: on the launch pad. The launch pads at Launch Complex 39 in Florida were built such that they lined up with the cardinal directions of north, south, east, and west. The flame trench under the pad pointed north and south, and the umbilical tower that held the rocket until it left the Earth sat north of the rocket. The astronauts, lying supine on their couches, had their head pointed due east, which meant that the command module’s hatch also pointed east.

From here, we can easily understand another key part of this question which is the three axes of the Saturn V. Like any machine that moves through the air, the Saturn V had three axes around which it could rotate: the x, y, and z axes. The x-axis is the vertical one running from top to bottom; this is the axis of roll. The y-axis is the axis of yaw, which runs through the middle of the rocket going north to south. The z-axis is perpendicular to the y-axis, running east to west. This is the pitch axis and the one we need to talk about next. 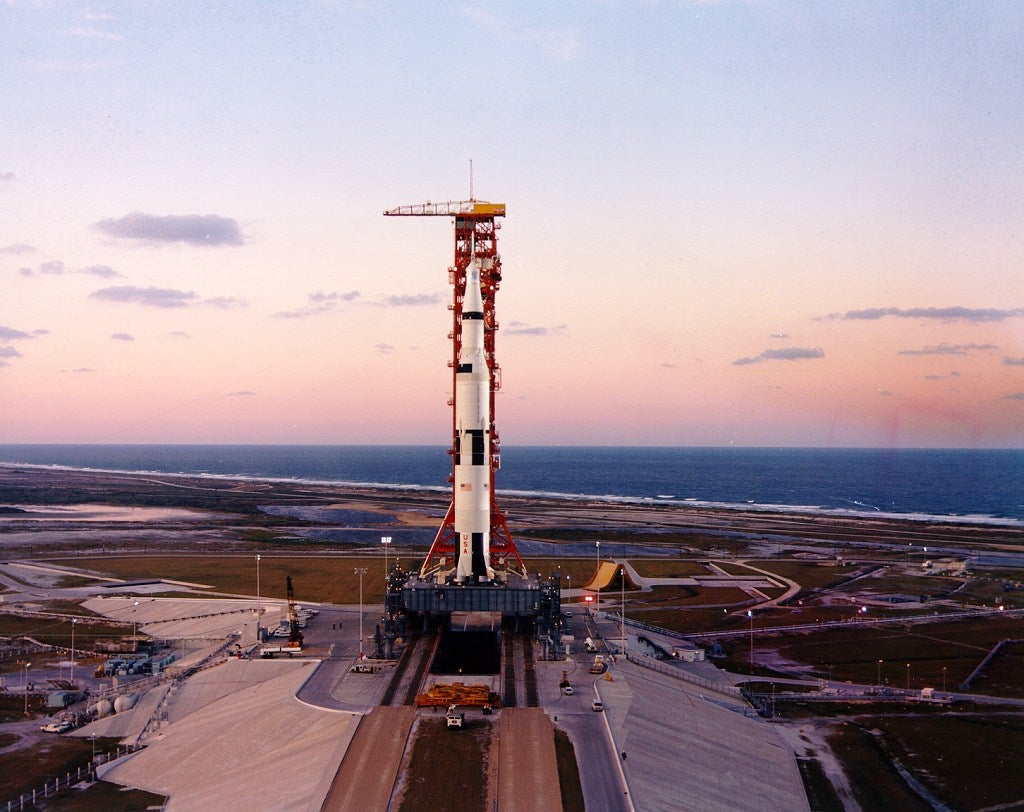 Apollo 8 on the launch pad

Apollo 8’s Saturn V seen from the south with the tower sitting due north.

Engineers have known for ages that the simplest way to put a payload into orbit is to have a rocket launch straight up then pitch over to the east. This takes advantage of the Earth’s rotation for a more effective flight. But the Saturn V wasn’t taking Apollo into orbit, it was taking Apollo to the Moon, and this is where the launch get a little trickier.

The Earth’s axis is tilted about 23 degrees relative to the plane of the ecliptic, the plane in which all the planets rotate. So a spacecraft orbiting the Earth’s equator will periodically pass above and below the ecliptic. Like that spacecraft, the Moon also orbits the Earth, but not around the equator. The plane of the Moon’s orbit is tilted with respect to the Earth’s rotation, and the exact degree of tilt changes depending on where the Moon is in its orbit.

It’s possible to fly from an orbit around the Earth’s equator to the Moon, but changing inclinations between the two bodies not only take a lot of fuel, it makes flying on a free-return trajectory — a trajectory that will have the spacecraft slingshot back from around the Moon — impossible. So NASA chose to start lunar missions with the spacecraft in an inclined orbit around the Earth that would simplify the flight to the Moon. And here’s where it gets even more complicated and fun.

Apollo 8 begins pitching over into orbit.

By calculating a mission trajectory based on a specific lunar landing site, mission planners knew exactly what orbit an Apollo spacecraft had to launch into around the Earth. This was known as the flight azimuth, simply the direction the rocket needed to fly relative to true north on Earth to make it into that desired orbit.

So the launch azimuth is calculated with respect to the cardinal directions, and the rocket is aligned to the same cardinal directions on the launch pad. At the same time, NASA wanted the Saturn V to take the simple “up and pitch over” path into orbit. The solution was, thus, pretty simple: roll the rocket so its orientation lined up with the launch azimuth, then start a simple pitch program. And that’s exactly what the Saturn V did. 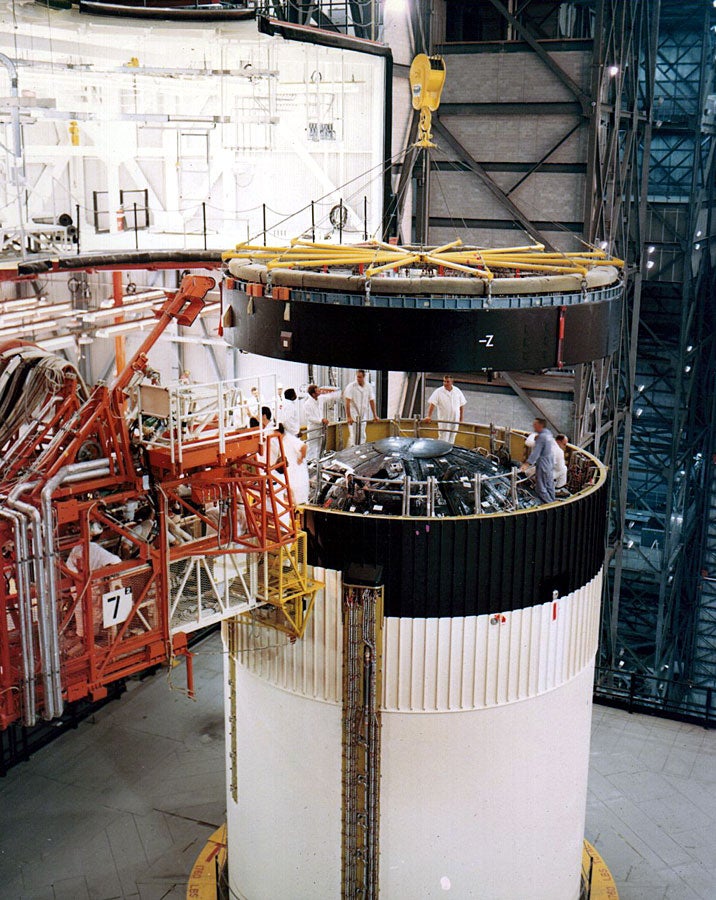 The whole launch was guided by guidance platform inside the Instrument Unit that sat above the S-IVB upper stage on the Saturn V. This gimbal-mounted guidance platform used three nested gyroscopes to hold a preprogrammed orientation, in this case the launch azimuth. The gyros, spinning rapidly, resist rotation of their axes, so as the rocket flies, the gyros feel the force of any attempted rotation, and servo motors respond by maintaining the platform’s desired orientation, which keeps the rocket flying on its heading.

The flight azimuth, calculated for each specific mission based on launch time and lunar landing site, was programmed into the IU’s guidance computer sometime after the rocket switched to internal power. This alignment was held using a theodolite about 689 feet due south of the launch pad; it shined a light through a window on the IU that helped it keep steady. And this had a very interesting effect. Before the IU was held to the launch azimuth by the theodolite, it was free, so if you could stand by the launch pad and watch a Saturn V for a full day, you would see the Instrument Unit appear to make a full turn when, really, it was the rest of the rocket turning with the Earth. 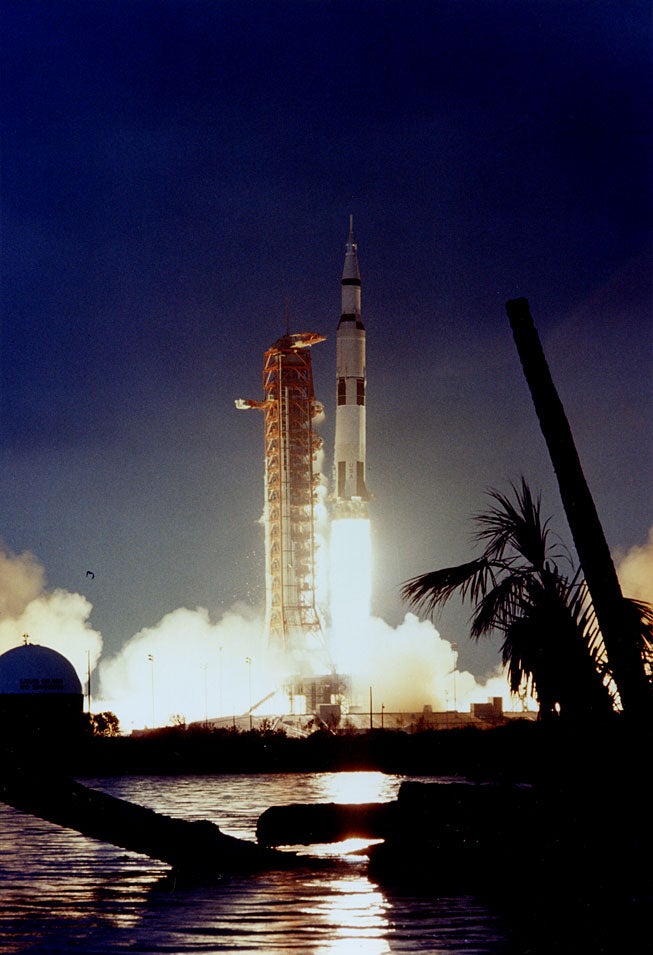 Apollo 14 goes through the scary-looking yaw program, tilting away from the tower.

At T-minus 17 seconds — 17 seconds before launch — the guidance platform was released from the theodolite. The call was usually “guidance is internal” though formally this moment was known as “guidance reference release.” From this point on, the IU was going to keep the Saturn V on its launch azimuth no matter what.

About one second after launch, the Saturn V made its first flight manoeuvre. The yaw program was the disconcerting-looking tilt of the rocket away from the launch tower, a move designed to protect it from any swing arms that failed to move away or a strong gust of wind.

About 12 seconds after launch came the second manoeuvre, the roll program. This had the rocket roll to align itself with the launch azimuth as prescribed by the guidance computer, which was usually at a bearing of 72 degrees. The next manoeuvre was the relatively simple pitch program. The rocket slowly took on a horizontal flight path that, combined with the roll, would put the Apollo spacecraft in the perfect spot for its trip to the Moon. 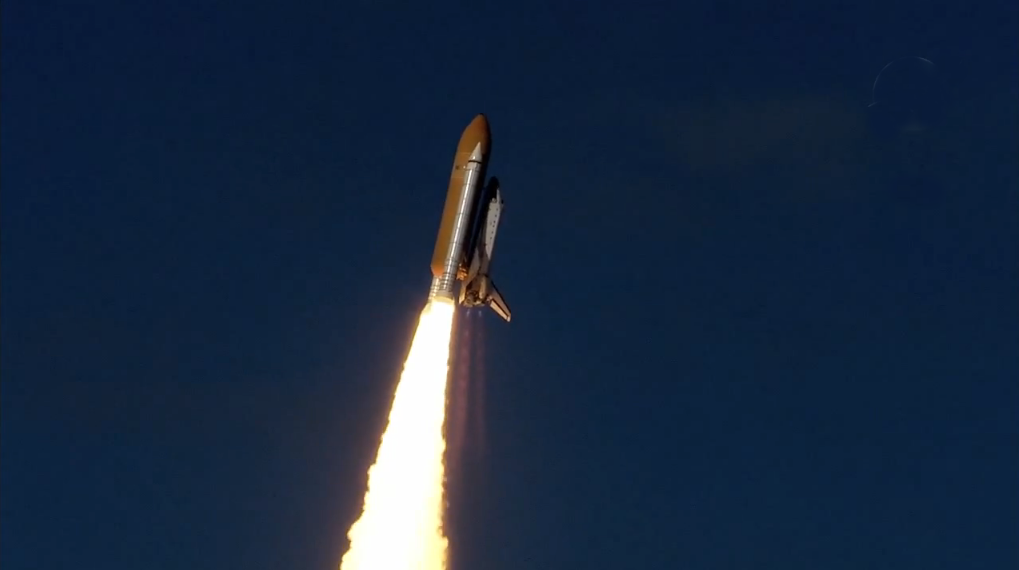 The orbiter Atlantis going through its roll program, flying “upside-down” with antennas pointing to Earth on its way into orbit.

A roll is a pretty standard manoeuvre for a rocket, and the exact roll depends on the desired orbit of the payload. The space shuttle also went through a roll program during launch, and because it wasn’t a symmetrical column like the Saturn V its roll was far more obvious. The shuttle was also aligned on the pad with its pitch axis pointing north-south rather than east-west, necessitating a far larger roll than the Saturn V.

Reusing Apollo facilities, the shuttle sat on the launch pad the same as the Saturn V, with its pitch axis running east to west. Right after launch it rolled to an inverted position with the shuttle’s top facing the Earth so antennas could contact ground tracking stations; those on the underside of the vehicle were blocked by the external tank and solid rocket boosters. From there, the shuttle rolled for the same reason as the Saturn V, the align itself to the flight azimuth for its specific orbit.

Sources: Thank you to David Woods who talked me through the awkward of getting my head around the Saturn V roll program! And also for catching a couple of awkward phrases and typos post-publication. Buy his book: How Apollo Flew to the Moon; CollectSpace; NASA; aerospaceweb.org; Apollo 8 timeline; Apollo 8 transcript.