Karl Urban on 'Star Trek Beyond', Life, Death, And His Character's Evolution 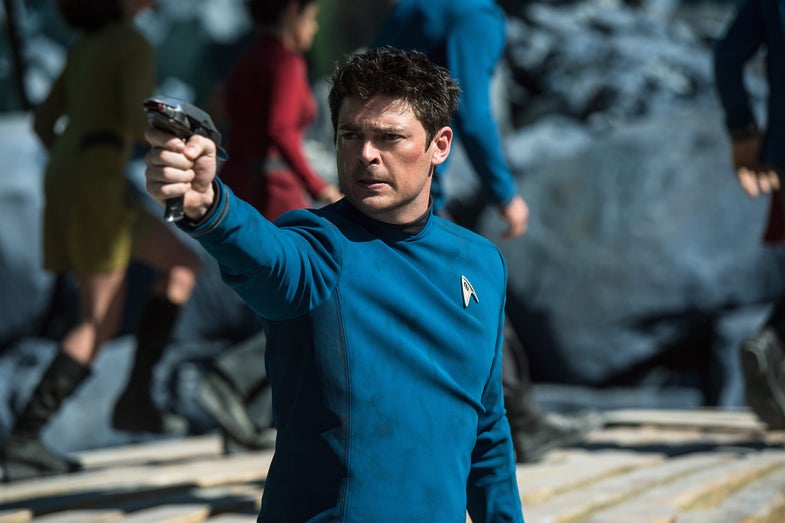 It’s Star Trek week here at Popular Science, as we count down to Star Trek Beyond‘s debut in theaters on July 22. We caught up with Karl Urban, who plays Leonard McCoy (aka “Bones”) in the new movie, to learn more about how his character has changed and what the movie has in store for us.

Popular Science: This being Popular Science, we’re very interested in the medical and science aspect of your character, Leonard McCoy. What medical research did you do for the role?

Karl Urban: That’s a great question actually. I did a bit of medical research into blunt force trauma, particularly the iliac region [the region of the abdomen closest to the ilium, or flared part of the hip bone] because there’s a point in our story where Spock has a metal object protruding from his abdomen, so I researched that a bit. I went into the medical journals and went online and stuff. Pretty graphic sort of stuff, and just got an idea of what I needed to check.

That was probably about the extent of medical research. That was the only real part in the story where my medical knowledge came to the forefront, though I was very intrigued by this new device that we showcased in this film. At one juncture, McCoy finds a wounded crew member and pulls out this device which separates in two and then it basically turns into a holographic representation of the patient’s internal organs. It’s basically like a portable MRI, if you will, which I thought that was a really fantastic possible future piece of technology that would have wonderful applications in society and would be a huge benefit to first responders.

PS: Wow, so it would show the internal organs as they were at that exact moment?

KU: Yeah I mean it literally has the ability to scan a patient with an MRI-quality representation, so you get to see what’s going on in the internal organs, and thus one is able to diagnose what the issues are and execute a course of treatment with utmost efficiency.

PS: Would you say that that’s one of your favorite medical technologies that your character uses?

KU: I think that is my favorite. Actually I did use a tricorder as well, a medical tricorder to scan for vital signs in the wounded and deceased, and that’s also a fantastic piece of equipment.

PS: The tricorder is definitely a classic. But, that portable MRI sounds really good for field medicine. Technology is obviously a huge part of how medicine in the Star Trek universe is different from medicine we have today. Are there any other ways that medical care is different in that particular time period?

KU: The medical science of that period is a lot less invasive. The technology deployed in Star Trek is often non-surgical–there is a way of treating patients, of healing internal trauma, through various waves or particle waves emitted from portable devices.

PS: How has McCoy changed over the course of these three films?

KU: I think the version of McCoy that we see in Star Trek Beyond is the most well-rounded, well-developed version of the character that I’ve had the pleasure to play. You get to see the true nature of his friendship with Kirk, and you get to see him in an almost psychologist sort of role. He helps put Kirk in touch with this sort of existential dilemma. And through the course of the film I crash-land on a planet with Spock, and have to save his life and keep him alive, and there’s just a lot of wonderful shades there. We get to see his humor, his bravery, his courage, his loyalty and also his fear of the situation they’re in and there are a lot of endearing aspects of the character that come forth.

PS: What’s some of the advice that he gives in the film to the various crew members that you think is important or could be applied to people here on Earth?

To Kirk, it’s ostensibly telling him that he needs to be his own man and he needs to find out what his purpose is. In our timeline Kirk has spent the vast majority of his life trying to live up to his father, and now he’s at a point in his life where he’s older than his father was and he’s surpassed many of his father’s achievements, so there’s this sort of existential quandary of, what’s your direction in life once you’ve achieved everything you set out to do? What comes next? And McCoy helps Kirk figure that out.

And with Spock, I guess Spock is contemplating the meaning of his life and the direction that he should take. He is discussing the value of life and death and McCoy eloquently says “fear of death is what keeps us alive,” and I believe that to be the case in many different ways.

PS: You mention all the different roles McCoy has to play, and all of the different things he has to do, and it seems like he must have a wide knowledge of medical specialties…is that something you’ve thought about? What’s his training and background that led him to this role as the doctor on the ship?

KU: Well, he’s a trained EMD, a trained surgeon, but on top of all that he’s also a trained member of Starfleet, and as such he is essentially trained in matters of science pertaining to the exploration of space and the discovery of new life and cataloging and analyzing and he really is a scientist as well. But then in true Star Trek fashion, he finds himself in roles that he’s not trained for–for example in Star Trek Beyond he finds himself having to fly a swarm ship and essentially become a fighter pilot, and it makes for great comedy to see this character thrown into the deep end.

PS: It seems like he has to do everything. Is there ever a time when McCoy’s not on call?

KU: Yes, there is, but I think by virtue of the fact that he’s the chief surgeon on the ship there’s an element that his job is 24 hours, seven days a week. He is ostensibly responsible for the life of everyone on that ship because he’s the head of the medical department. He’s responsible for the captain both mentally and physically. It’s his job to see that this crew is up to the task at hand, and that they mentally and physically maintain their countenance so that they are able to perform in their functions and roles.

PS: Would you personally want McCoy as your Doctor?

KU: Yeah, he’s a great doctor. I mean in Star Trek: Into Darkness he cured death. That’s the doctor you want.

PS: Absolutely. You have played so many wonderful sci-fi characters. John Kennex in Almost Human, Judge Dredd, now McCoy. Is there something about this genre that really appeals to you?

KU: I’ve always been a fan of science fiction. I watched Star Trek when I was a boy and obviously the Star Wars films, the Star Trek films, films like Close Encounter, Blade Runner, Alien. I enjoy all of those films. I enjoy the genre. I was born in that time. Had I been born a couple of decades earlier it would have been Westerns. But I don’t go out of my way to work exclusively within a science fiction genre, there just so happens to be a lot of films that are being made these days have a science fiction element or a fantasy element. They’re very popular films.

PS: McCoy is coming into contact with death a lot more than most characters, just like doctors here on Earth. How is he able to handle that? Is it just focusing on the job or is it something else?

KU: That’s one thing I admire about doctors. They have to have the ability to emotionally process fatality. I thought DeForest Kelly did a wonderful job representing that in his version of McCoy. He can be compassionate, but at the same time there’s kind of a blunt, hard aspect of the character that is accepting of death because it is so final and irreversible and it is what it is, and as a doctor you cannot get emotionally affected by it. You cannot become compromised, because it might affect how you do your job. In the film he’s at that point, and you can see that in the efficiency with which he does his job treating the survivors and looking for casualties as the Enterprise is under attack.

PS: You mentioned that you grew up watching Star Trek. What was your favorite episode or storyline?

KU: I liked the “Corbomite Maneuver”. I liked that because there was a good conflict between McCoy and Kirk, with McCoy chastising Kirk for treating Bailey harshly. Bailey wasn’t up to doing his job, and also I enjoyed the central premise, that there’s this alien intelligence that’s threatening the Enterprise and Kirk has to bluff this character, which is a very human trait, then you find out that this alien entity is just a small child, and so what was such a threat, you get this paradigm shift where you realize he’s just as scared as members of the Enterprise because that was his defense mechanism. I thought that was a great episode, and also the “Tholian Web,” I particularly like that.