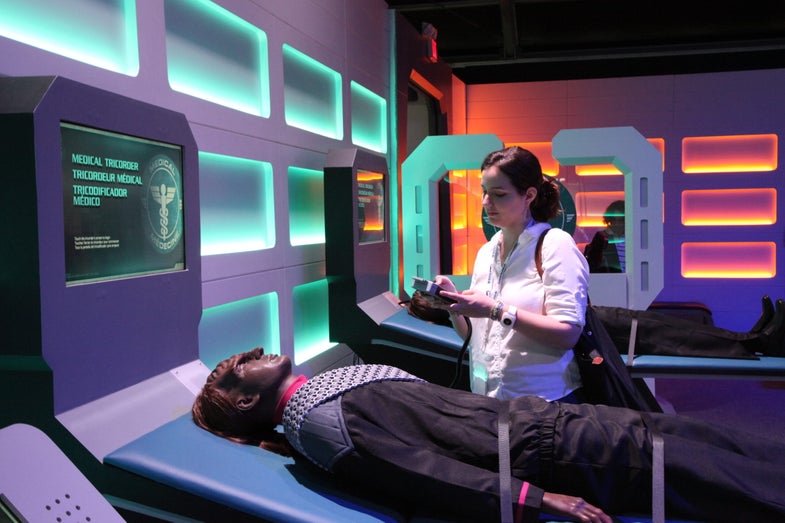 A young Klingon cadet in a Starfleet uniform lies on the medical bed in front of me. I have three minutes to use my tricorder to diagnose his medical problem and keep the red band on his uniform from becoming a stereotypical mark of doom.

Time is ticking away. I wave the tricorder over his motionless body. (They must have tranquilized him. Klingons aren’t normally so quiet.) I get the readings and make my diagnosis. I decide there’s a problem with his heart valve. My diagnosis is correct. Luckily, he’s not dead, Jim.

It’s career day at Starfleet Academy, and I’m neither dreaming nor on a set in Hollywood. I’m in New York, on Pier 86, just outside The Intrepid Sea, Air & Space Museum. Popular Science editors Sarah Fecht and Jason Lederman are with me, here to find out which Starfleet career path suits us best at the museum’s newest exhibit: The Starfleet Academy Experience. The exhibit is making its United States debut here in New York after opening in Ottawa, Canada earlier this year.

After walking in, we receive a sleek wristband that identifies us to the interactive exhibits via an RFID chip. Now, we can finally enter the Star Trek universe, each of us becoming a prospective cadet at a Starfleet Academy recruiting center. At least, that’s the idea.

Like just about everyone at the exhibit, we’re huge Star Trek fans, and there’s plenty to take you out of character and into a full-on geek out session over the mention of an episode, or a Tribble spotted in a glass case, or, wait….was that an outfit worn by the Grand Nagus hiding in a corner? Yes. Yes it was. 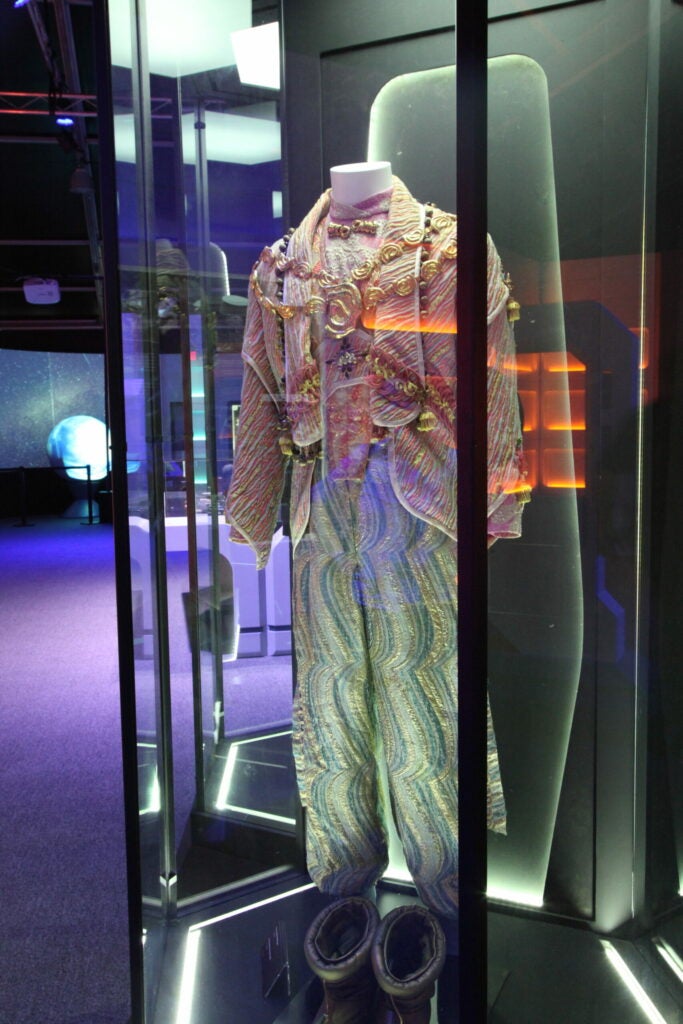 But the exhibit, for the most part, stays within the universe so that Trek fans don’t have to go to all that extra effort. All dates mentioned on the walls are star dates. Modern-day scientific discoveries (like the effort to create a working tricorder) are referred to in the past tense, as though they have already led directly to the technology seen in the show.

There are also numerous ‘historical artifacts’ displayed in glass cases scattered around the 12,000 square foot space. The so-called artifacts are really props and costumes used by actors on the TV shows, from the venerated The Original Series all the way through to the much-maligned Enterprise. There’s makeup worn by Leonard Nimoy, a Robin Hood costume worn by Patrick Stewart, phasers, tricorders, and Tribbles … oh my.

Even if they aren’t actual artifacts, they are historic pieces of Star Trek, which is celebrating its 50th anniversary this September. The props are just a small part of a vast collection owned by Martin Netter, a collector and founder of Filmwelt Star Trek shop. Netter has been collecting Star Trek props for over 25 years, and was there for the Starfleet Academy Experience opening in New York, making sure that everything got set up correctly.

When asked why he started collecting so many artifacts, Netter earnestly replied that it was to preserve something for the fans. At the time Paramount was getting rid of many of the items, and Netter saw their value.

“I collected these for the future, for the next generation,” he said without a trace of irony.

Even if their parents might be the most excited about some of the “historical” details, there is plenty of fun for the next generation. There’s lots of interesting facts on the walls not only about the show, but about how some of the technologies of the show are being explored in real life.

But the stars of this exhibit are the interactive displays. The point of my medical crash course was to see what my aptitude was for Starfleet’s medical branch. The exhibit contains seven areas with a variety of activities and quizzes (less pop quiz, more Buzzfeed questionnaire) to see which specialty you might be best suited for: Command, Communications, Science, Tactical, Medical, Engineering, or Navigation. 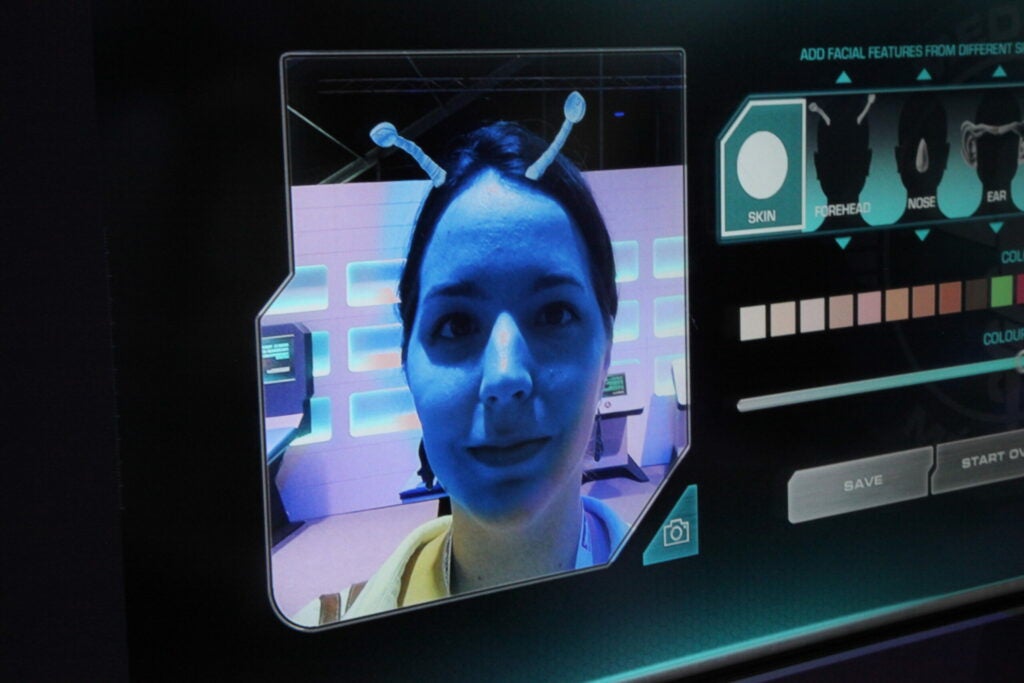 Mary Beth Griggs as an Andorian

No longer one of the “pink skins,” as Andorians call humans in Star Trek: Enterprise.

In addition to successfully diagnosing a patient, I got to see what I would look like as an Andorian. Blue suits me. The Klingon language, on the other antennae, does not. I’m pretty sure I brought dishonor upon my entire family with my butchered pronunciation at the Communications station. Tactical training was likewise one of my weak spots. While I couldn’t hit the broad side of a Bolian freighter, Lederman brought down plenty of hostile targets. You’ll want him on your away team, especially if you’re wearing red.

It wasn’t all bad news. I managed to redeem myself by picking out a great planet to crash land on, and safely guiding our ship through a particularly hazardous stretch of space. I also transported myself successfully onto a ship. Fecht, regrettably, seemed to perish in a transporter accident when the simulation froze. We’ll miss her.

Then came time for the ultimate test. After walking by the uniforms of many famous Starfleet Captains (Picard, Janeway, Kirk) it was time to face the ultimate determination of character. On a replica bridge of the NCC-1701-D we each faced the Kobayashi Maru, the ultimate command test that all cadets must go through.

I don’t like no win situations. But, lacking the time to thwart the test, I lost anyways after snatching 70 civilians from certain death on their starship, to certain death on mine after Klingons blew up my ship. 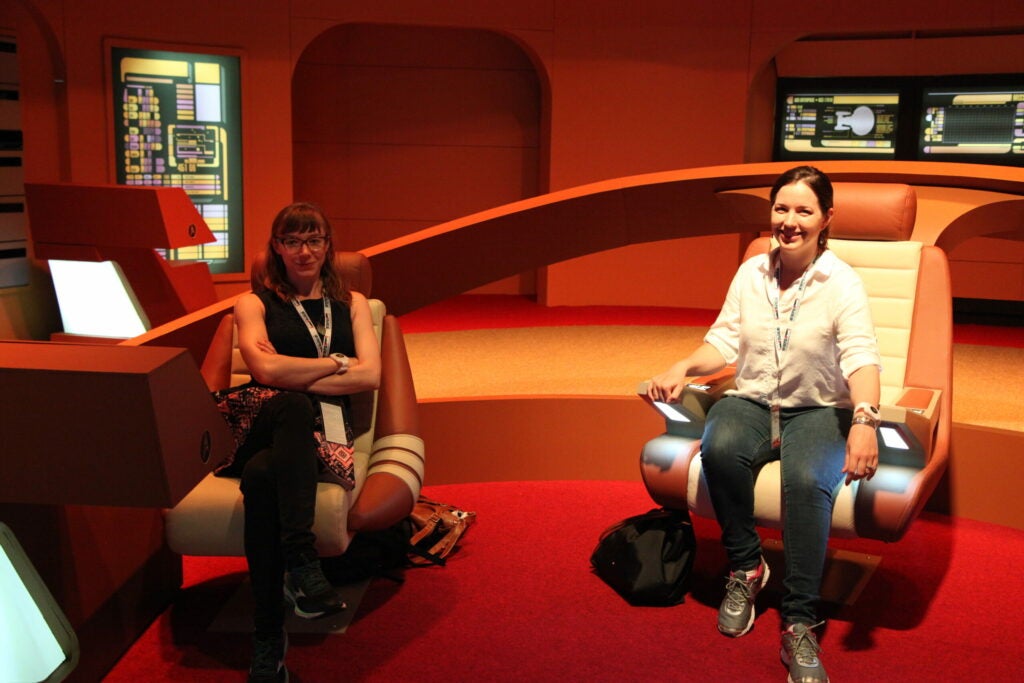 Griggs and Fecht on the bridge

In the end, perhaps unsurprisingly, I got assigned to the science specialty, which is likely a good thing. Future crews should never have to depend on me for their Klingon translations.

The exhibit will be in New York through October 31. Tickets for adults start at $25. Additional events, including Star Trek-themed sleepovers on the Intrepid will occur at various times throughout the year. See The Intrepid Sea, Air & Space Museum’s website for more details.

This week is Star Trek Week on Popular Science, in honor of Star Trek Beyond, which comes out in theaters on July 22. Follow our coverage here.