Success! NASA’s Juno Spacecraft Made It To Jupiter 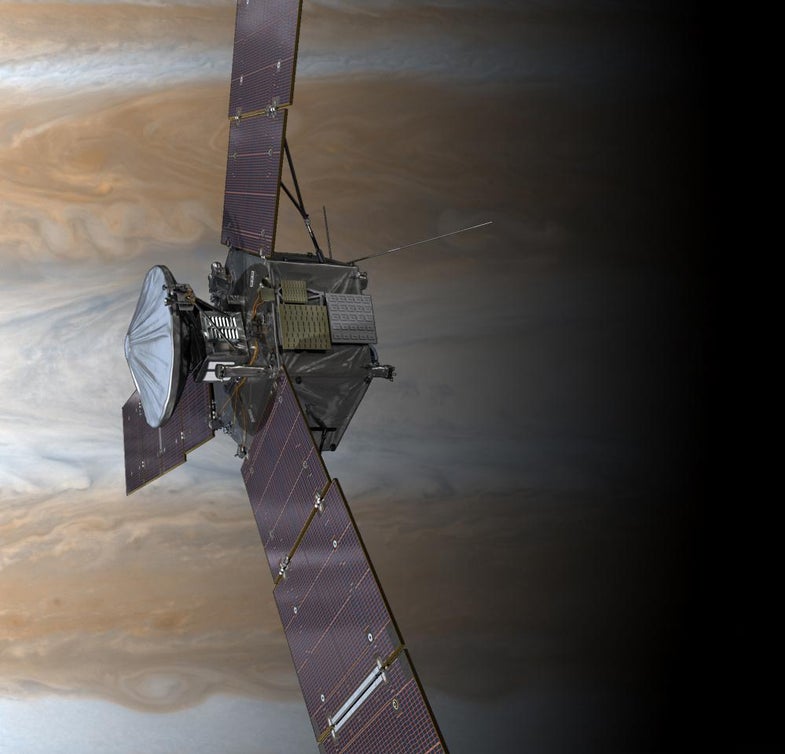 At 8:53 pm Pacific on Independence Day, the Juno spacecraft successfully cartwheeled into orbit around Jupiter, officially beginning the mission to further understand the mysterious gas giant. Cheers and applause were heard here at NASA’s Jet Propulsion Laboratory in Pasadena, California, as Juno dutifully transmitted the first “I am safe and have been captured by Jupiter” tone to mission control.

The Juno teams are here from Lockheed Martin, Southwest Research Institute, and of course, JPL. More than 13 years have passed between the mission’s concept phase and the arrival of Jupiter. Mission control fell silent as they awaited each confirmation to trickle in from Juno, ensuring that all that hard work was worth it.

While none of us worked on or had anything to do with this mission, the entire newsroom and auditorium also held their breath, sighing with anxiety awaiting word from the spacecraft. Would Juno make it? Could it really survive Jupiter’s blasts of radiation? The signal just needed to come in!

So much work goes into a mission like this from the conception to design, engineering, and launch that when it jumps over the initial hurdle it’s a sweet victory for everyone involved. As the countdown clock ticked on, the people in mission control all stood up in anticipation of the big moment. Once they were all on their feet, it was time. Cheers and screams! “We did it!”

Juno was sent into unknown territory tonight, speeding on purpose into one of the most dangerous environments in our solar system. Getting Juno into this polar orbit was tricky not only because the spacecraft was flying away from Earth at a rapid 165,000 miles per hour, but because it had to fly through Jupiter’s harsh, radiation-blasted magnetic field. Everything we just experienced here at JPL actually took place 48 minutes prior, due to the light travel time from Jupiter to Earth.

News outlets from around the world came to JPL for this momentous event, on the day when the USA celebrates its independence with barbecues en masse and family celebrations. It’s a good day to remember our country’s space agency, working tirelessly in the pursuit of knowledge.

Juno now embarks on a two year mission to find out whether or not Jupiter has a solid core and to detect how much water is present there. The data sent back from Juno will not only tell us more about how the giant planet was created, but it will ultimately give us more answers about how our own planet formed.

Its almost 10pm here on the west coast and the second news briefing of the day is about to begin. There’s applause and smiles as the science team enter the Von Karman Auditorium, they all look very relieved knowing that all of their hard work has paid off.

Understandably, the panel can’t wipe the smiles of their faces. Principle investigator Scott Bolton speaks into the mic, “NASA did it again! And I’m so happy to be a part of the team that did that, it’s almost like a dream coming true right here.” Bolton was reminding his family that tonight still carried a lot of risk. They would either enter orbit or not.

JPL finally ends the night by rewarding us with a video of Juno’s approach to Jupiter. It shows the beautiful dance of the four main moons orbiting around Jupiter in real-time. This is definitely a lovely first gift from Juno, which NASA will post tomorrow.

Now the team gets to do the fun part: science!

Tomorrow the spacecraft is expected to beam back some low-resolution imagery from Jupiter, with high-res closeups arriving in late August, after the spacecraft’s orbit swings it in close again. The spacecraft is already closer than we’ve ever been to Jupiter before, and the mission will send back images and data that will reveal Jupiter as we’ve never seen it before.

Update 6/5/2016 at 1:55am: This post was updated with new information and quotes from a NASA press conference.