How It Works: A Self-Tracking Drone

Way cooler than a selfie stick 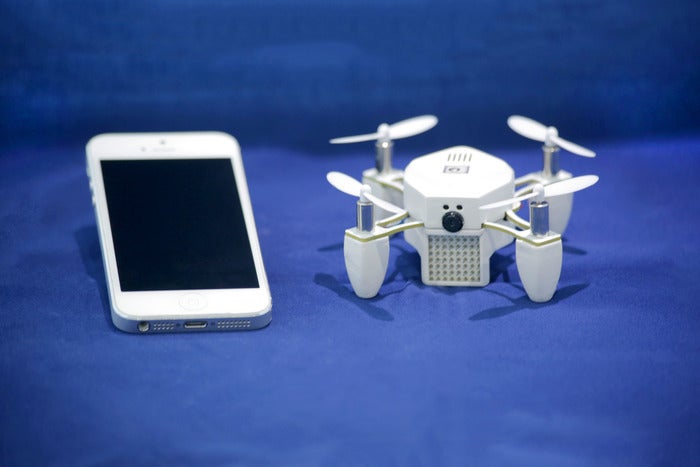 The Zano flying camera is a great tool for snapping pictures of yourself—and it’s far more sophisticated than a selfie stick. The $300 quadcopter uses a suite of instruments to dodge obstacles while autonomously tracking its subjects, whether they’re walking through an office, biking down mountain trails, or even diving off cliffs. Lead engineer Ivan Reedman of Torquing Group advises against underestimating Zano’s abilities: “It’s not just a selfie drone.”

Zano connects to a user’s smartphone via Wi-Fi. Users can pilot the drone using a virtual joystick on their smartphone screen; they can adjust its altitude via a simple slide bar; and they can instruct the camera to stay fixed or rotate to capture different views.

In follow mode, a user sets the drone to trail the phone at a fixed distance. Outdoors, Zano establishes and sustains its position relative to the phone using GPS, gyroscopes, accelerometers, sonar, and a barometric pressure sensor that helps it estimate altitude. “Even if you’re moving, Zano will maintain its focus on you,” says Reedman.

Infrared sensors prevent Zano from crashing into obstacles, but Reedman and his team also designed the drones so they won’t run into one another. Every Zano has a unique identification number, along with a small low-frequency radio. If one approaches within 150 feet of another, they will recognize each other via radio and adjust their flight paths accordingly.

To maintain its Wi-Fi connection and comply with aviation regulations, the drone never drifts outside a predetermined maximum distance from the user’s smartphone. “If it gets out of range, it will either land or go to where you were last,” Reedman says.

Inside, GPS is unreliable, and a slammed door is enough to throw off the barometric sensor, so Zano relies on other techniques. A sonar constantly pings the floor, gauging the drone’s height, and five infrared transceivers bounce signals off the walls and ceiling. The device’s micro-controller parses this data a thousand times per second to determine whether Zano is in the right position—or heading for a wall.