For Drone Pilots, A Real-Time Map Of All The Aircraft In The Sky 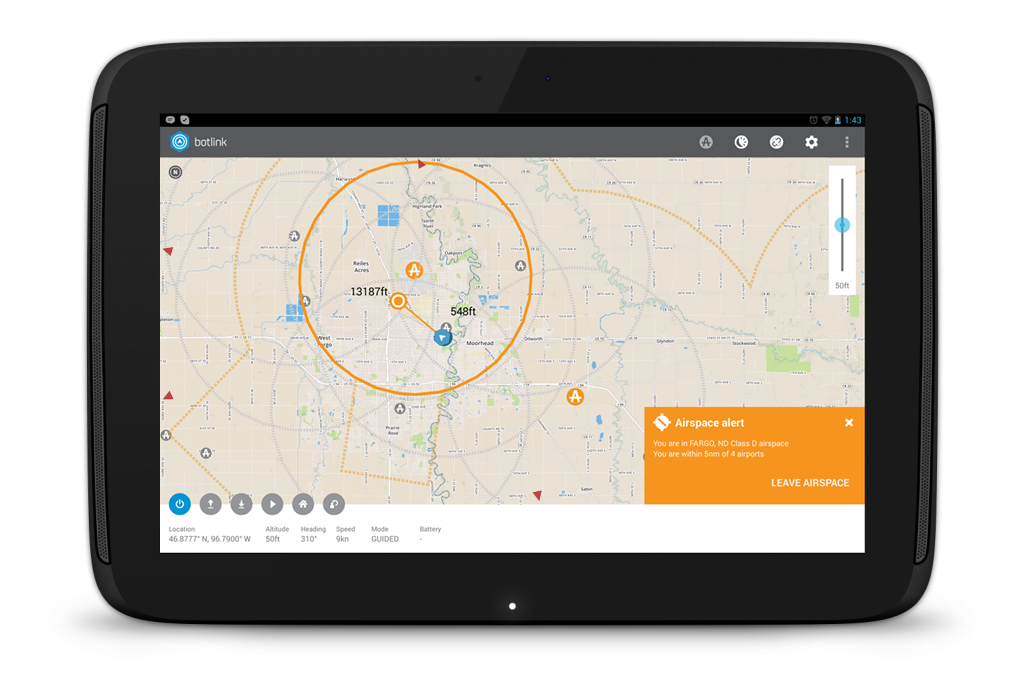 It is easy to make a simple map of the sky, and incredibly hard to make a detailed one. As more and more drones enter American airspace, several maps have debuted that attempt to explain for new drone pilots where exactly the sky allows flying robots. Botlink, created by military unmanned aerial vehicle pilots working out of North Dakota, doesn’t just want to show where drones can fly, it wants to show drone pilots what else is already in the sky.

To the uninitiated, American airspace is complicated. Learning to read flight charts and understand the differences between Class E and Class D airspace are part of pilot certification. But most drone pilots are hobbyists, either unaware of the laws themselves or unable to navigate the dense charts. Released online earlier this month, AirMap offers a basic guide to the low sky: Users can select airspace restrictions to display on the map, and it tells drone pilots what that means for flights under 500 feet–the legal ceiling for hobbyist drones. Not to be outdone, the FAA announced their own upcoming map app, built to the tune of $430,000, that will give users alerts and come with flight planning tools.

The creators of Botlink promise something a bit different, though they share the same goal of informing hobbyist pilots about the skies in which they fly their drones. Using data from a variety of sources, including the FAA, Botlink will show drone pilots airspace rules for drones and also where other aircraft are in the sky presently. “If you enter temporary flight restricted airspace,” Botlink CEO Shawn Muehler tells Popular Science, “our application lets you know what airspace that is. It alerts you via advisory warnings,” and then provides the pilot with information they need (like a phone number for an air traffic control tower to call). That’s useful for pilots who want to make sure a wayward quadcopter doesn’t spark alarm.

“Another feature we’re incorporating is real-time chat,” says Muehler. “If an aircraft controller sees a drone, they can send an instant message through the server back to the operator of that drone.” This message can either be a text chat or voice chat over internet. For right now, this communication feature is limited to parties using Botlink, but Muehler says they are working on a way to make that work for aircraft without Botlink. Muehler says Botlink is working with the the University of North Dakota, which boasts a strong unmanned aviation program, so that students can use Botlink to communicate with each other as they fly, and professors can use Botlink to check in on students in the field.

Besides the live maps and chat function, Botlink incorporates mission planning software, so pilots can plot out flight paths and then watch as their drones fly the preprogrammed routes. According to Muehler, while Botlink has been in beta so far, the applications launches for the public tonight.