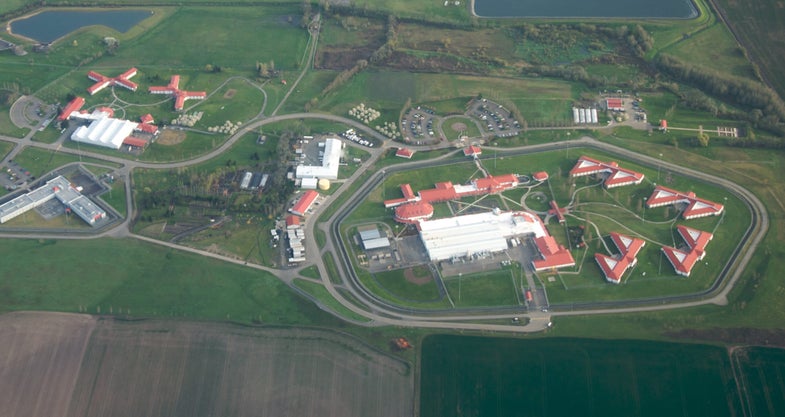 Legal drone delivery may still be a ways off, but quadcopters have been smuggling contraband into prisons for years now. Quadcopters are cheap enough and powerful enough to carry a few pounds of goods, like cigarettes, knives, cell phones, or drugs over a prison fence, and they’re sometimes even recovered from the drop to do it again. Prisons, which understandably don’t want drones to do this, are now looking for ways to keep the robots out.

The Bureau of Prisons is a division of the Justice Department boasting responsibility for 198,953 inmates, primarily those who have committed federal crimes or those who are imprisoned in Washington, D.C. They oversee only 7.5 percent of the roughly 1.5 million total prisoners held in the United States. Yesterday, they posted a “Request for Information” (which is basically the formal bureaucratic way an agency window shops before deciding to pursue a contract). Specifically, the Bureau is looking for “Protection from Unmanned Air Vehicles.”

Here’s how they describe the threat:

There’s concern too about airspace where friendly and hostile drones may both be flying. And the hostile drones can take on a whole host of characteristics. While not expecting any drones heavier than 55 pounds, the Bureau of Prisons is worried about those flying at altitudes from ground level to 18000 feet, traveling from 0 to 328 feet per second, smaller than 4 feet in all dimensions but otherwise variable in body type, built from anything between carbon fiber to light metal alloys, and commercially available models as well as custom-built drones.

To protect against drone smugglers like this, the Bureau wants to detect them at a mile away, track them at three-quarters of a mile, and either destroy or intercept them as close to that as possible. They’ll need to stop directly piloted drones, as well as ones flying pre-programmed routes, even autonomously and maybe even using GPS.

There is one small advantage on the side of the Bureau. They note that the “Surveillance target [prison] is generally isolated in the middle of an open area with limited ground clutter and other interfering sources such as people and [radio frequency]. There may, however, be roads where vehicular traffic is moving within the zone of interest.”

Companies that think they have an answer should submit questions to the Bureau of Prisons by December 1st. If protecting prisons from drones is anything like the growing military field of anti-drone weaponry, expect a lot of cameras, jamming guns, and maybe even lasers. The answer might even be counter-drones themselves.