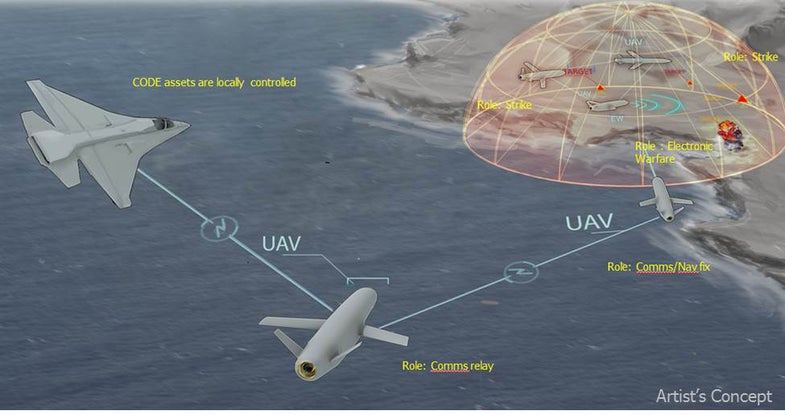 Drones work best operating in packs. Last year, a study by the RAND corporation showed that when two or more drones are tracking the same target, they are much more successful at staying on its trail. Right now, however, flying drones is very labor intensive, with each drone requiring a team of pilots and observers. DARPA wants to solve both of these problems by putting more drones in the sky — with fewer humans controlling them.

The defense research house is calling a meeting together under the name “Collaborative Operations in Denied Environment,” or CODE. The full name means “working together in places where people are actively trying to make it hard to fly,” and the acronym shows the way that DARPA hopes to solve this problem: with superior programming. Successfully flying modern military aircraft in actively dangerous skies, with all the communications and data involved, is a problem the Air Force is trying to solve. Here, DARPA wants to specifically address it for drones.

The meetings are scheduled for March 2015 in Arlington, Virginia, and DARPA is inviting “participants with capabilities, methodologies, and approaches that are related to CODE research and focused on revolutionary approaches to unmanned aircraft systems, autonomy and collaborative operations.”

All of this boils down to some degree of autonomy. Right now, most drones are flown like other airplanes, with autopilots, in part, maintaining the flying conditions, while human pilots at the controls actively steer the vehicle every second it’s in the sky. That’s tedious, pilot-intensive work, especially for surveillance drones that circle the same slice of sky for 24 hours at a time. If the drones were autonomous enough, they could instead check back in with a mission controller whenever a change needed to be made.

Calling this “collaborative autonomy,” DARPA envisions a system where groups of drones work together under a single human commander. The drones watch the situation and then send back recommendations for the supervisor, who would either agree with the recommendation, disagree, or tell the drones to collect more information.

To borrow a video game metaphor, it would move drone operations away from flight simulators, where a pilot flies one plane, paying close attention to altitude and fuel. Instead, this would be more like a strategy game, where a commander selects units that perform a function as expected, and then assigns them new tasks as the situation demands. Less Star Wars: X-Wing, more StarCraft. DARPA doesn’t envision full remote-controlled armies yet, setting a modest goal of one person controlling six drones at a time. (The U.S. Navy already demonstrated a sailor controlling 13 robotic patrol boats at once, though the ocean surface is a very different environment than the sky.)

If successful, CODE means drones could fight not just the insurgencies of today, but the robot wars of the future.