It might not B-Unstoppable, but it certainly looks fun 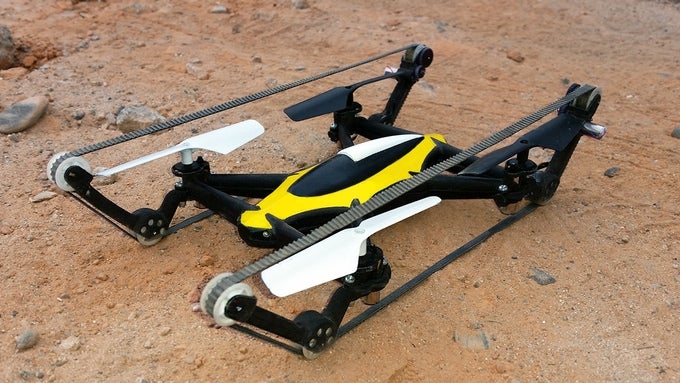 Armored sarcophagi crawling over road and ruin, impervious to the slings and arrows of their foes, tanks are defined by their weight. Aircraft, by the very necessity of flight, are lighter affairs, balancing the need for powerful engines with a body that can get off the ground. Still, that hasn’t stopped people from dreaming of flying tanks. Now, thanks to a crowdfunding campaign on Kickstarter, tank-bodied quadcopters exist.

With a name that could have been ripped straight from a G.I. Joe play set, the B-Unstoppable is a drone with treads, or a remote control tank that flies. The introduction video sets it to a rousing soundtrack as it climbs over the varied landscape of a playground, then takes to the sky. On the ground again, B-Unstoppable is stopped pretty directly by a staircase, but quadcopter rotors allow it to fly up and over the obstacle, while treads enable it to roll down the staircase smoothly.

Apart from the treads, B-Unstoppable’s body looks more like a wire frame outline of a tank than an armored juggernaut. Beneath the treads, the rotors align front-to-back during driving but spin out when needed for takeoff. The whole affair weighs less than 3 ounces, and there’s even a camera inside. Maker Witold Mielniczek claims it can fly for 9 minutes, drive for 18, or do a combination for 12 to 15 minutes.

Watch the Kickstarter video below.