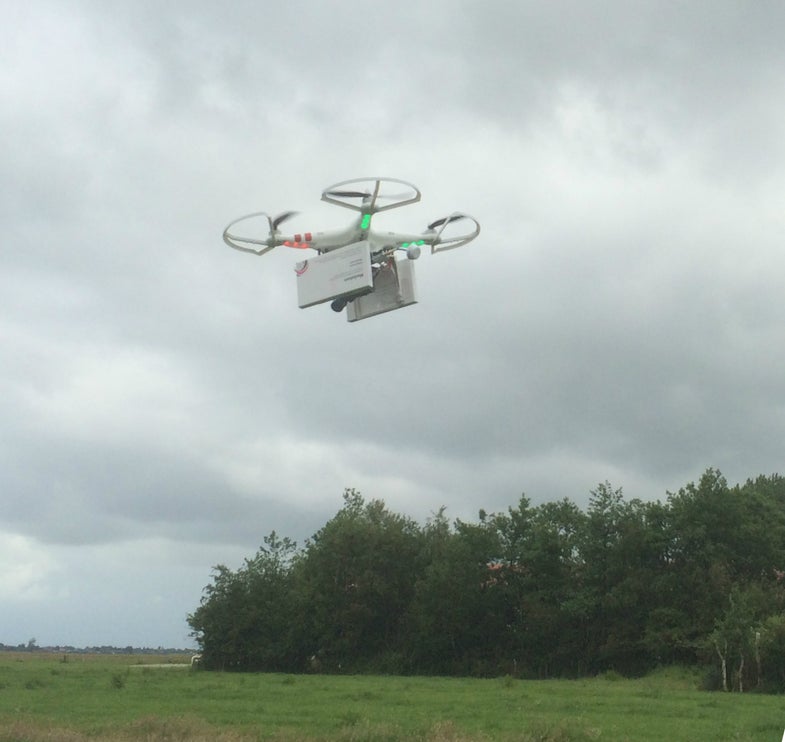 From the almost mythical taco-copter that never was to Amazon’s long-in-the-works Prime Air drone delivery system, the idea of carrying goods to people by flying robot remains compelling, despite little practical application. For every serious attempt, there are also plenty of gimmick drones, which use the technology more as a means to grab headlines than anything else. Here’s one example: this Saturday, Dutch activist group Women on Waves plans to deliver boxes of mifepristone and misoprostol, pills used for medical abortion, to a town in Poland where access to legal abortion is heavily restricted.

Going by the image in Women on Wave’s announcement, the drone used looks like an early DJI Phantom model, which is a relatively affordable quadcopter that can carry about half a pound. Pills are lightweight; in the picture it carries two small white boxes. The drone can fly for about 25 minutes, but the drone doesn’t have to go very far: the plan is that it will fly from Frankfurt an der Oder in Germany to Słubice in Poland, a distance of only a few thousand feet that includes the width of the river Oder. Assuming it all goes as intended, Women on Waves will have an event where they take questions from the media afterwards.

This is an attempt to overtly smuggle medical supplies across international borders. In their announcement, Women on Waves emphasize the legality of their flight, with footnotes citing the relevant Polish and German laws:

Because this is a media event, the point is as much about the politics of the delivery than it is about the success of it. Smuggling the medicine across the border would be one way to ensure they get into the hands of those in need, but drones don’t have a great track record as legal delivery vehicles yet, much less as successful smugglers. Last August, South Carolina Corrections Department said they found a crashed drone outside a prison, surrounded by contraband items like a cell phone, marijuana, and tobacco. Earlier this year, a meth-smuggling drone crashed south of San Diego. According to Tijuana police, that drone was flying according to pre-programmed GPS coordinates, but that’s sometimes hard to manage even with human crew ready to respond and operating in the full clear of the law.