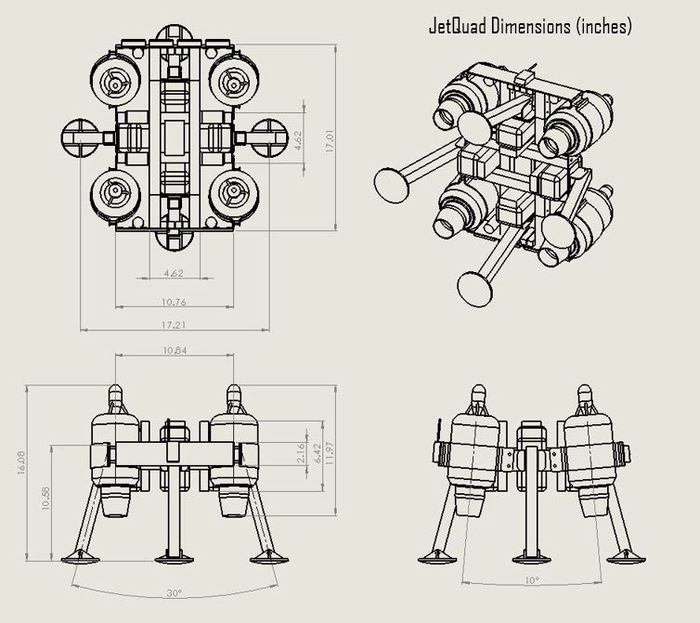 By all appearances, JetQuad looks like a supercharged version of the iconic quadcopter body, where a central structure houses controls and four peripheral engines that power the vehicle for stable flight. In action, however, it’s a very different beast. According to designer and Arizona State University PhD candidate Alexander Taits, the JetQuad of traveling at almost the speed of sound, and reaching altitudes up to 33,000 feet.

But Taits’ JetQuad Kickstarter project is not really about making a new recreational aircraft. Instead, it’s a test platform for another way to get to space.

In the video for his Kickstarter campaign, Taits explains the advantages jets bring over rotors.

As shown in the video, previous single-engine jet boosters that Taits has made suffer from stability issues. Quadcopters, and likely quadjets, counter instability by having four engines operating simultaneously, creating a much smoother flying craft. The fuel needs of four engines are much greater than that of one, which is a major design constraint that could be better understood with a working scalable model.

The Kickstarter campaign ends January 31st, and is seeking $15,000, primarily for jet parts and electronic components. Backers pledging over $100 will get small toy quadcopters, and backers pledging $500 or more will be invited to the JetQuad’s first launch in Phoenix, Arizona.