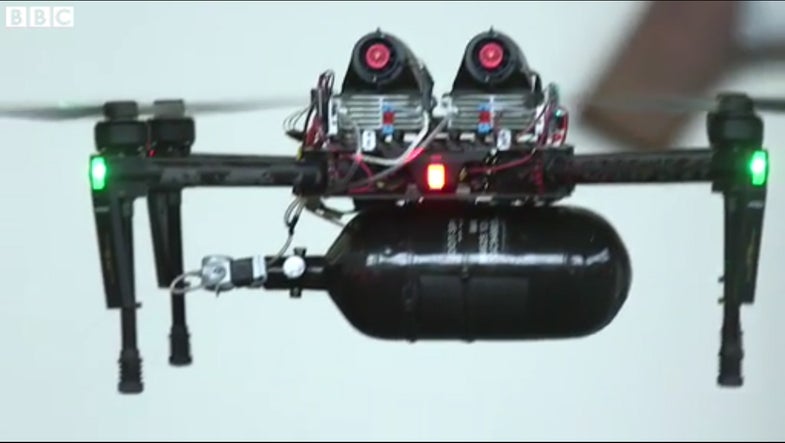 Drones are only useful when they’re in the air. And thanks to the limited charges provided by batteries, drones spend a lot of time not flying. Electric drones are often limited to just 20 minutes of air time before they have to land and get new batteries, or wait for the old batteries to charge. With hydrogen fuel cells, a commercial, electric drone could spend up to two hours hanging in the sky, be refueled almost instantly after landing, and then take another 120 minutes in the air.

This flying contraption is the result of Intelligent Energy, who attached a hydrogen fuel cell to a DJI Matrice 100 quadcopter. The fuel cell and its fuel weigh just 3.5 pounds, which is lighter than the battery it replaces. Hydrogen fuel sometimes comes with unique risks, but the National Hydrogen Association thinks those risks are overblown.

Intelligent Energy has been making hydrogen fuel cells since 2001, and recently demonstrated their drone on BBC’s Click. Intelligent Energy isn’t the first to make such a device: Boeing and others have their own fuel-cell drones. What makes this design stand out is the simple reality of it: a normal quadcopter, with a new power source, hovering in a gymnasium as though it was supposed to do this all along.

Intelligent Energy expects the drone to enter the business market within the year, and be available for consumers after that. Watch the BBC Click segment on it below: