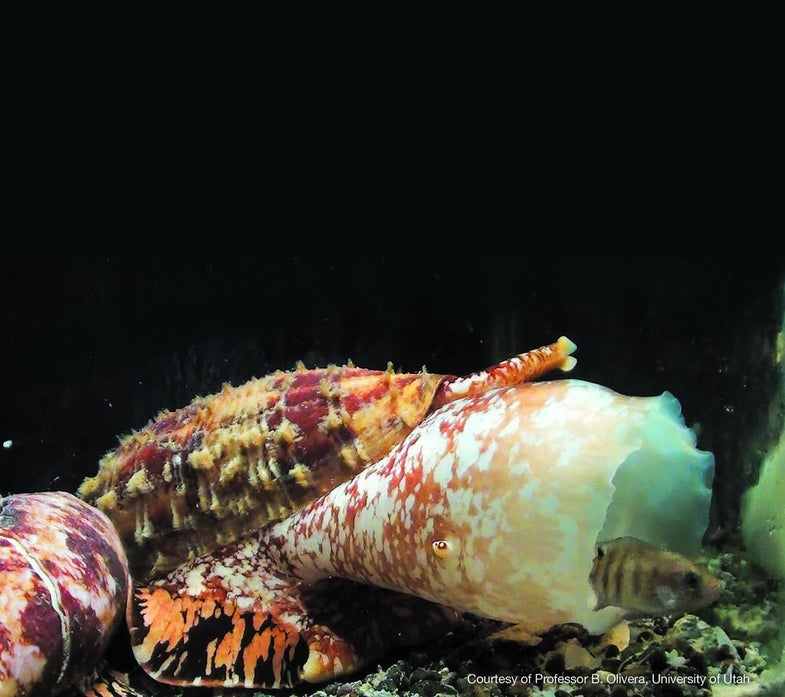 Scientists in Australia and the United States have unlocked the structure of an insulin that cone snails use to stun their prey. Understanding how this sea snail venom works so quickly may inspire faster-acting insulin to treat people with diabetes.

More than 100 species of cone snails use venom to take out fish, often by injecting their prey with venoms that target the nervous system. The geographic cone snail, Conus geographus, uses a different tactic. Last year, the team described how C. geographus and another cone snail have evolved insulins that are more similar to those used by fish (and humans) than by mollusks.

Normally, the hormone insulin is produced by the pancreas to regulate blood sugar; people with diabetes cannot produce or use insulin properly. However, “insulin can be subverted for nefarious biological purposes,” wrote the scientists. The cone snails use insulins to send fish into hypoglycemic shock, in which blood sugar levels drop dangerously. This makes the fish easier to capture (or, as the scientists put it, “to engulf with the snail’s distended false mouth”).

Now, the team has investigated what makes this insulin so fast-acting. Human insulin is stored in six-molecule clumps that must be broken up for it to be used, which can take up to an hour. This is not the case for cone snail insulin. It lacks a “hinge” component that makes human insulin both stick together and connect to receptors in the body.

“Cone snail venom insulins work faster than human insulins by avoiding the structural changes that human insulins undergo in order to function–they are essentially primed and ready to bind to their receptors,” coauthor Mike Lawrence, of the Walter and Eliza Hall Institute of Medical Research in Melbourne, said in a press release. “By studying the three-dimensional structure of this snail venom insulin we’ve found how to dispense with this ‘hinge’ entirely, which may accelerate…the speed with which the insulin takes effect.”

Lawrence and his colleagues found that the cone snail insulin attaches to and turns on the receptors that accept insulin in people. It wasn’t as effective as human insulin, but it could potentially start working in only five minutes. The team reported their findings online September 12 in the journal Nature Structural and Molecular Biology.

“Now we can look at the human insulin and see if we can make it more snail-like,” coauthor Helena Safavi, of the University of Utah in Salt Lake City, said in another statement.