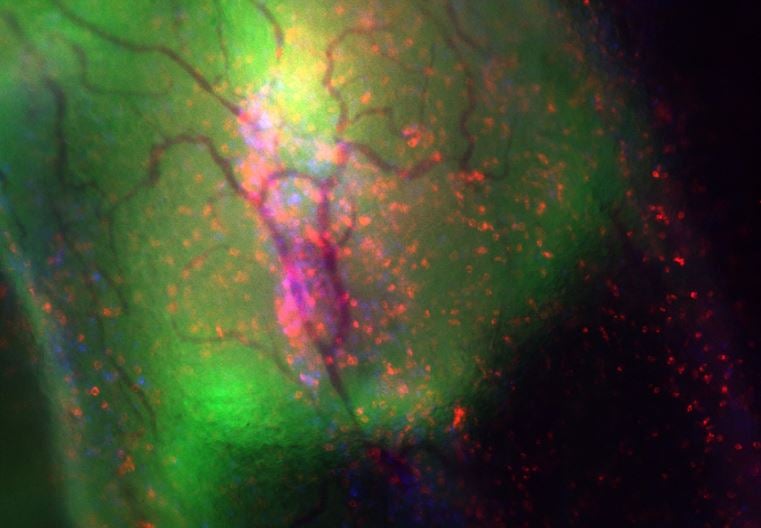 Viral infection may seem to be rather simple. A virus gets into the body and starts to make a home. In turn, the immune system responds to the unwanted inhabitant. Usually, after a period of days, the immune system finally gains the advantage and resolves the problem.

But at the microscopic level, the battle is complicated. A number of different immune cell types are involved in the campaign served with the purpose of killing the opponent without doing too much damage to the surrounding cells. Researchers have been examining this process for decades and have gained some understanding of the art of this war.

Most research has been accomplished in the laboratory through indirect analysis of molecules such as cytokines, reactive oxygen species, and antibodies. But visually, there has been a gap in knowledge. Though we may know how the immune system responds over the course of an infection, finding a way to see the fight in real time has been difficult at best.

Now that elusive goal may be possible. A group of American researchers have found a method to observe the viral war in the mouse. Their efforts have provided a glimpse of the strategy the immune system uses to fight an infection as well as offered perspective on why it takes so long to rid ourselves of one particular viral invader.

The area of the mouse chosen for visualization was the trachea. This was found to be accessible through non-fatal surgery and provided the right translucent properties necessary for real-time imaging. In addition, opening up this area allowed for the use of a ventilator to maintain oxygen levels in the animal.

The virus chosen was influenzavirus. Although this virus primarily infects the lung, the trachea is also at risk for invasion. Influenza also is one of the most common viral pathogens of humans suggesting the technique could have value in understanding how humans deal with infection.

The cell is known as a CD8+ T-cell – or CTL – and it is responsible for producing toxins and other molecules capable of killing infected cells. These cells are known to migrate throughout the body and tend to gather when a virus is detected. But what happens during the fight has been a bit of a mystery.

When the team ran the experiments, they were greeted with no surprises. As expected, when the virus was introduced into the trachea, infection initiated. To get to the real heart of the battle, the team waited for five days while the infection took hold. At this point, the CTLs were migrating toward the attack area meaning the fight was about to get interesting.

By Day 7, the movement of CTLs slowed significantly. The cells had reached their destination and were beginning the assault. The engagement in battle was apparent on Day 8. The cells moved in short bursts, going from cell to cell finding the infected victims and killing them off. The troops were moving in a coordinated fashion making sure to leave no stone unturned. The virus was most certainly doomed in this area.

As the cells gained ground, movement in the local region increased. On Day 9, the cells were highly motile but remained in the confined area. This suggested the campaign had moved from the direct battle to surveillance. This continued for several days as the cells maintained their hold on the area. The only difference, however, was the state of attack. The cells began to calm in their activity. By Day 14, they were arrested. They had done their job and were ready for some rest.

With the campaign visualized, the team wished to learn one more aspect to the wartime strategy. They lowered the dose of the virus and wanted to see if there would be less infiltration of immune cells. Their theory was partly correct. In two of the three tests, there were fewer immune cells. But this wasn’t absolute, suggesting the immune response may be affected but not driven by the virus.

For the authors, this study represented the first step in understanding how the immune system reacts to a virus. For the most part, the CTLs acted as expected. They swarmed the area, fought off the attack, and then maintained their position long after the threat had dissipated. The results gained from years of molecular study had been given credence through this visual means.

Of course, CTLs are only one part of the immune response. There are many other cell types involved in fighting off a virus and their contribution does play a role in battle. For the authors, this information is just waiting to be found in future studies. As these roles become visually clear, we will have a much better understanding of how our immunity responds to a viral threat. We may also be able to use this information to develop better treatments to help fight off this all too common infection.