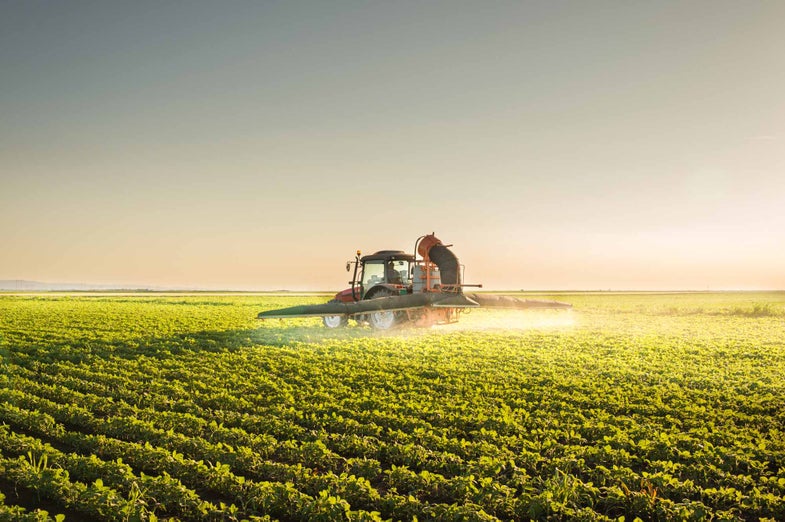 An American farm is as much of a marvel of modern chemistry as it is of Mother Nature. This time of year, the landscapes across states like Nebraska, Missouri, and Arkansas are commanded by verdant fields of billowing corn and low-slung bushes growing soy. The crops’ successes can be attributed to the soils and the rains, of course. But for better or worse, we’ve also got synthetic fertilizers made from natural gas, insecticides designed to stop voracious critters, and weed killers like 3,6-dichloro-2-methoxybenzoic acid (better known as dicamba) to thank for the bounty.

But the relationship between plant and chemical has grown volatile. According to research out of the University of Missouri, dicamba is has harmed more than 3 million acres of soybeans in more than 1,400 separate incidents, across 20 states. Are we planting the seeds of our own demise?

Why are we using dicamba?

As far as modern herbicides go, dicamba is fairly old. But while the chemical has been in use since the 1940s, that use has been limited until recently. As of 2012, the most recent year for which the U.S. Environmental Protection Agency has compiled data, the chemical ranked towards the bottom of commonly used pesticides. Its bottom ranking was likely due its tendency to drift onto other fields—and the fact that it is virulently toxic to soybeans, a staple crop in much of the Midwest. Soybeans are processed into oil and protein to feed animals, with a smaller portion of the harvest ending up in human products: soy milk, tofu, etc. Soybeans also play a crucial role in maintaining the region’s soil health by replacing the nitrogen that corn, another staple crop, tends to remove.

For much of the past 20 years, glyphosate was the plant killer of choice. Glyphosate, better known as RoundUp, was created by the agrochemical company Monsanto in 1970. Like dicamba, glyphosate’s use was originally fairly limited, as it could only be sprayed in places where people wanted to kill off all of the plants—between rows in orchards, for example, or in train yards. A corn farmer who sprayed glyphosate on her field to take care of weeds would wind up with no corn.

But in the 1990s, Monsanto began selling a series of patented, genetically modified, “RoundUp”-ready seeds. Monsanto had altered crop seeds—beginning with soy, but eventually growing to encompass corn, canola, alfalfa, cotton, and sorghum—to be resistant to glyphosate. A farmer planting these seeds could spray his field with glyphosate, killing off weeds while leaving his crop intact. It’s the agricultural equivalent of getting to eat all of the chocolate without gaining any weight.

Over time, however, the weeds also became RoundUp ready, developing resistance to glyphosate. Farmers had to spray more of the herbicide to do the same job, and sometimes even that wouldn’t work. So, last year Monsanto unveiled a new soybean seed, Roundup Ready2 Xtend, that was also resistant to dicamba, allowing farmers to douse their fields in both products. Because the herbicides kill plants using different mechanisms of action, plants that are resistant to one are unlikely to be resistant to the other.

There was only one problem. While the Ready2 Xtend seeds were approved by the United States Department of Agriculture (USDA), there wasn’t actually a dicamba herbicide approved for use with them. In the U.S., pesticides achieve EPA approval based on their intended use. And because dicamba was not intended for use on soybean plants—apart from the Ready2 Xtend seeds—because of its toxicity to the crop, the EPA hadn’t approved its use on soybean fields.

So why didn’t the EPA rush out and approve existing dicamba products? Research dating back to the 1960s had noted dicamba’s tendency to drift. Instead of staying where it’s spread, dicamba often ends up on crops in neighboring fields as well.

The issue of herbicide drifting isn’t new—glyphosate drifted. But while glyphosate had the potential to harm 10 to 12 rows of corn, dicamba has the potential to wipe out an entire soybean field. If the EPA approved existing formulations of dicamba for use on Ready2xtend, they ran the risk that a farmer growing other soybeans would get a visit from their neighbor’s dicamba spray. In fact, last year—the first year Ready2xtend seeds were available, albeit without an approved dicamba formulation—researchers from the University of Arkansas say that is exactly what happened.

In Arkansas, farmers—including those who had planted the Ready2xtend, despite the lack of an approved form of dicamba to spray the crops with—were combatting an especially bad pigweed infestation. The flowering plant, which is in the same family as amaranth, is what’s known as a “competitive species.” If left unchecked, it will grow quickly and out compete anything else planted in that field. Faced with this risk, it’s not surprising that farmers were tempted to use an unapproved product—even if they knew about the risk of dicamba drift.

Dicamba damages a soybean plant in a distinctive way, making it relatively easy for farmers and researchers to track the trouble. Normally, a soybean leaf curves slightly outward and downward; if rain were to fall, it would slide off of the bean’s leaf. But a soybean exposed to dicamba takes on a cupped appearance, with the leaves moving upward with slightly fringed edges. That’s because dicamba kills by mimicking plant hormones called auxins, which are responsible for growth and development. Imagine a lock and a key: the plant holds receptors—the lock—awaiting a hormone, a key, to tell it how to behave. Dicamba slips into the lock, altering plant development in ways that can kill. But depending on when it hits a soybean, it might simply stunt the crop’s lowering yield. Either way, it costs that farmer money. 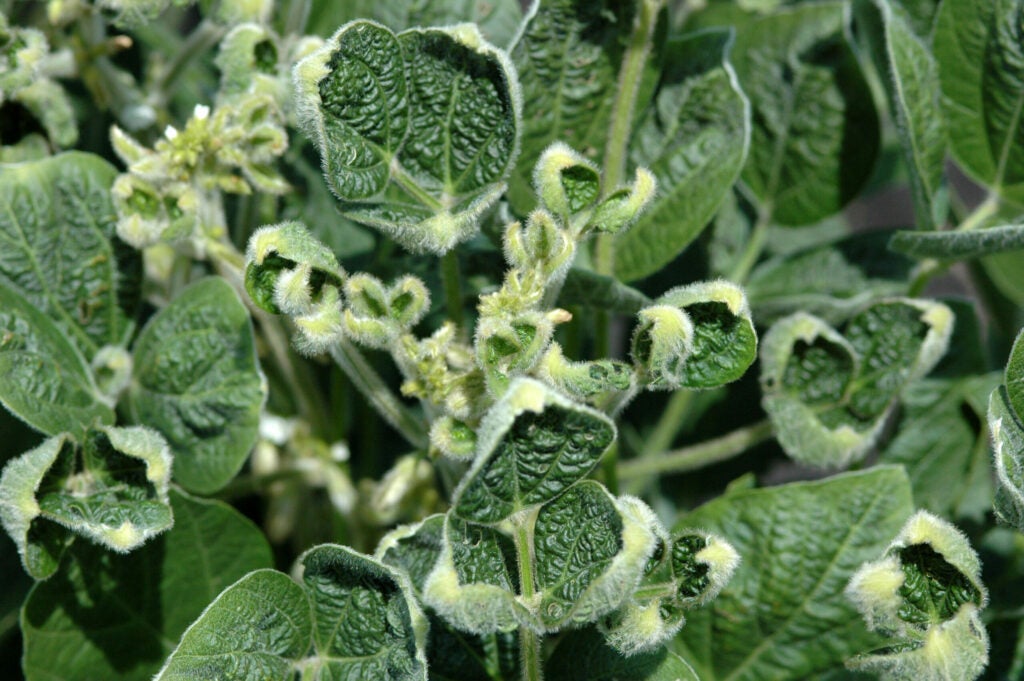 Leaves of a plant damaged by dicamba

The issues associated with off-label dicamba use were supposed to disappear. Late last year, well after farmers in the Midwest had pulled the last soy and corn plants from their fields and were deep into preparation for this year’s planting season, the EPA approved three formulations of dicamba designed to be less volatile, or less likely to drift. One was created by Monsanto, another by the Dow Chemical Company, and a third by the German chemical company BASAF. But despite these new, supposedly less volatile formulations, the problem seems to be getting worse.

“In 2016, we had a total of 130 complaints that were dicamba related,” says Chris Chinn, the Director of Agriculture at the Missouri Department of Agriculture. “We started getting complaints last year on June 22. This year we got our first complaint on June 13, and we had received approximately 134 complaints by July 6.”

In a typical year, the department receives around 70 to 80 complaints for all pesticides.

“By July 6 we had two years’ worth of complaints that had come in a very short period of time,” says Chinn.

As of August 23, Arkansas has received 950 dicamba misuse complaints. And manufacturers aren’t denying that dicamba is causing damage.

“Our field representatives have been actively investigating cases where they have been called out,” says Chad Asmus, the technical marketing manager for BASAF. And in many cases, he says, they’ve found plant growth consistent with dicamba drift—something their product is meant to prevent.

The outlook is hazy

The complaints prompted both Missouri and Arkansas to pull the herbicide. The sale and use of dicamba has been banned in Arkansas since July 11, and is punishable by a civil penalty of up to $25,000 while the state makes a decision about its continued use. Missouri halted sales and use for a week, but allowed the herbicides back on the shelves with new labeling requirements. The new formulations of dicamba can only be sprayed by certified pesticide applicators, between the hours of 9 am and 3 pm on days when wind speeds are below 10 miles per hour.

During the day, the temperature tends to be warmer closer to the ground and cooler higher in the air. If you apply a pesticide at that time, assuming there isn’t much of a breeze, the chemical is more likely to stay put. But during a temperature inversion, which is what happens as the sun begins to set and the day gets cooler, the air above tends to be warmer than the air below. That acts as a kind of a cap, preventing air from mixing (it’s how we end up with smog and mist). If you spray during an inversion, you trap the pollution—and increase the likelihood that as the inversion dissipates, the herbicide will drift off.

Asmus and other manufacturer representatives argue that the drifting is due to user error. Farmers are spraying during inversions and windy days, according to some of their investigations. Another issue could be sprayer contamination, where farmers use a nozzle for dicamba application and then fail to clean it out before its next use.

But others are say that the new formulations simply still drift. Outside scientists—those who didn’t work for the companies standing to benefit from herbicide sales—were only asked to test the effectiveness of these new products, not their volatility or how likely they are to spread.

Farmers say that the new application instructions are so difficult that it’s essentially impossible to follow them. The directions on Monsanto’s XtendiMax with Vapor Grip, their new dicamba formulation, contain more than 4,500 words of very small type. Among other things, it states that farmers must spray while wind speeds are at least 3 miles per hour but no more than 15 miles per hour, and at heights no greater than 24 inches above the targeted crop. In addition to tracking wind speed and direction, farmers must also maintain a proper flow rate that allows for coarse droplets, and not too much pressure. Those droplets have to be bigger if the thermostat creeps above 91 degrees. And the directions vary based on the crop—soy vs dicamba-tolerant cotton that many of the farmers are planting.

The USDA and state governments will have to decide whether to continue to allow dicamba use, and the clock’s ticking. Farmers are already beginning to make their planting decisions for next year. At the same time, weed resistance is a growing problem, and we’re running out of relatively safe and effective herbicides. Farmers are increasingly turning to older, more toxic chemicals in response. Some point to the broader issues with our agricultural system—insects are also evolving to resist their own pesticides, ground water supplies are dwindling, and key pollinators like bees are on the decline—as evidence that we need rethink how we farm, and begin moving away from techniques that are so heavily reliant upon synthetic pesticides. In 2010, a UN report concluded that relying less heavily on pesticides or synthetic fertilizers—without totally taking them out of the picture—would be best the best way to feed a growing global population.