Pruitt’s replacement won’t be any better for the EPA 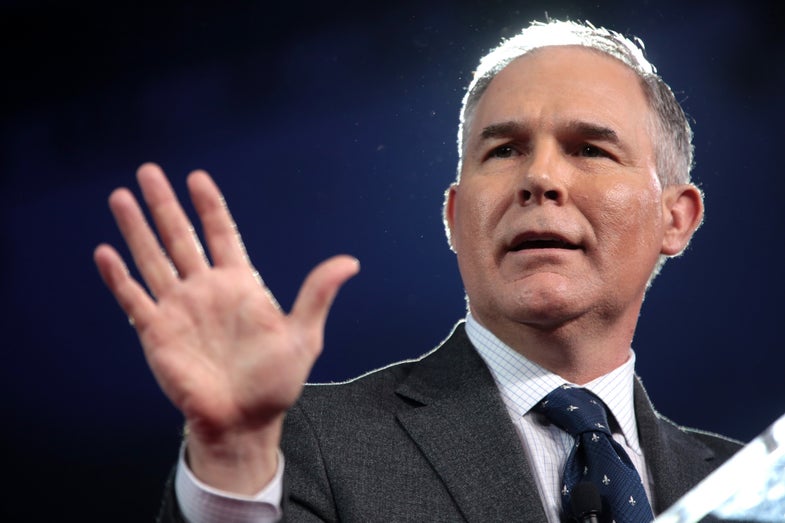 The head of the Environmental Protection Agency has stepped down from his position, according to a Twitter announcement from President Donald Trump, but there is little reason to believe his replacement will deviate from the agency’s current deregulatory agenda.

“I have no doubt that Andy will continue on with our great and lasting EPA agenda,” Trump tweeted.

In his 504 days as head of the EPA, Pruitt has become known as much for his steady string of ethics scandals as his “back to basics” agenda, close ties with industry, and refusal to settle lawsuits with environmental groups.

However, environmental advocates take no comfort in Pruitt’s departure and Wheeler’s sudden promotion. Before his April confirmation to the deputy position, Wheeler spent eight years as a lobbyist for Murray Energy, a large Ohio-based coal mining company.

“We could not have a better example of Trump’s failure to drain the swamp,” says Benjamin Longstreth, senior attorney for the Climate & Clean Energy Program at the Natural Resources Defense Council. “We are definitely concerned [Wheeler] will continue Scott Pruitt’s record of hostility to environmental protections.”

During the Senate committee hearing ahead of his confirmation for the deputy administrator position, Wheeler expressed his wholehearted support for President Trump and Administrator Pruitt’s “ambitious agenda” to return “EPA to its core mission and purpose.” This irony is that Pruitt’s “back-to-basics” approach to environmental regulation, which includes cleaning up toxic pollution sites, is about shifting federal authority to state and local regulators and prioritizing “an environment where jobs can grow.” In contrast, the EPA was born from an environmental movement in the 1960s to protect public health and and safeguard the nation’s air, land, and water.

Wheeler’s lobbying client echoes a similar industry-first vision for the EPA. CEO Robert E. Murray, who gave $300,000 to the president’s inauguration, handed Vice President Mike Pence a 16-item deregulatory wish list that has been published in the New York Times. The plan targeted policies that reduce air pollution and greenhouse gas emissions from coal-fired power plants, including the Clean Power Plan and U.S. participation in the Paris Climate Agreement, as well as programs which encourage the development of wind and solar energy.

“I gave Mr. Trump what I called an action plan very early. It’s about three-and-a-half pages,” Murray is quoted saying in a Frontline documentary. “He’s wiped out page one.”

Like Murray, Wheeler is also skeptical that climate change is cause by human activity, despite overwhelming scientific consensus to that fact.

During the confirmation process, Wheeler told the EPA ethics office he would refrain for one year from working on issues that involve clients represented by his former law firm, unless otherwise authorized. Nevertheless, Wheeler’s public calendar shows that his deputy administrator job has him meeting regularly with renewable fuel and energy groups.

“We need to have someone in office who doesn’t have these ties to regulated entities,” Longstreth says. “We shouldn’t have somebody who is coming from a position where they were lobbying on behalf of a regulated entity.”

Unlike Pruitt, however, Wheeler has managed to stay out of the limelight and avoid personal scandal during his long career inside Washington.

Wheeler started his tenure at the EPA in the Office of Pollution Prevention, then worked for Oklahoma senator James Inhofe, who famously used a snowball as evidence against global warming while speaking before the Senate in 2015. Wheeler then moved to the U.S. Senate Committee on Environment and Public Works, where he worked first as the clean air subcommittee staff director and then as the Republican committee staff director.

When asked about his greatest accomplishment, Wheeler told the Senate Environment and Public Works committee, “I have been in this town almost 30 years, and I would like to think that I have kept my personal integrity the entire time.”

Pruitt leaves the agency as the subject of 13 federal investigations into his spending and administrative decisions, according to the New York Times. The investigations, which will continue after his departure, include misusing a provision in the Safe Drinking Water Act to increase the salaries of two aides who had followed him from the Oklahoma attorney general’s office, wasting taxpayer dollars on extravagant travel expenses, purchasing an unauthorized $43,000 soundproof phone booth for private communications, and renting a condo owned by the wife of a lobbyist for just $50 per night. In return, Pruitt’s landlord used her access to speak to Pruitt about a family friend who was applying for a policy position at the EPA, according to emails obtained by the Sierra Club in a lawsuit.

Other conflicts of interest that kept his name in the headlines involved using EPA staff and security to run his personal errands. Examples include asking after the price of a used Trump International Hotel mattress, finding job opportunities for his wife, and picking up his favorite brand of luxury lotion.

In an unapologetic resignation letter heavy with religious overtones, Pruitt cited “unrelenting attacks” that took “a sizable toll” on him and his family.

Trump told press pool reporters that Pruitt resigned of his own volition, and that there wasn’t a final straw resulting in Pruitt’s departure. EPA staffers reportedly learned of his resignation via Trump’s tweets.