Fracking pollution stays in waterways long after the fracking is done

Do you have to let it linger? 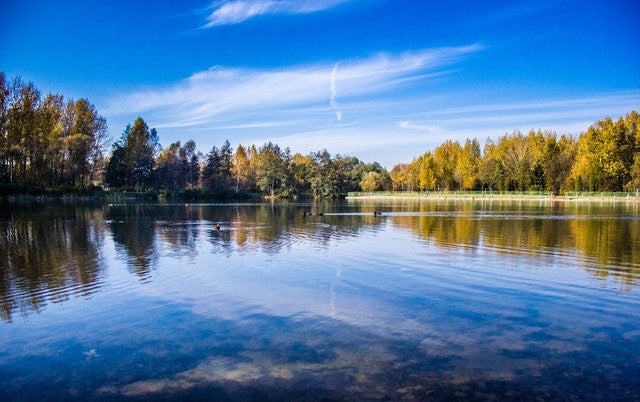 Dumping fracking water into rivers, lakes, and streams can cause lasting environmental damage, according to a recent study in the journal Environmental Science and Technology—even if you treat it first. The study used lake sediment to reconstruct the history of produced water (a byproduct of fracking) in a Pennsylvania watershed, and assess the long-term impacts of the resulting pollution. In an area where fracking waste was legally released into surface water ecosystems, they were able to detect elevated levels of salt—and radioactive chemicals—some distance away.

“When it comes to oil and gas waste water management, the impact to water quality and sediment quality can occur on a much larger scale than we had previously thought,” says lead study author William Burgos, a professor of civil and environmental engineering at Penn State University. “This study documents that these contaminants travelled at least several tens of kilometers, and that they’re still buried there five to ten years later.”

Over 100 billion gallons of fluid are injected into U.S. hydraulic fracture wells (better known as fracking wells) every year. The fluid, a complex mix of water, biocides (pesticides along with bacterial and fungal killing agents), and exfoliators like sand, is key to the hydraulic fracture extraction of oil and natural gas. Fossil fuel companies inject the fluid into the ground under extremely high pressure, using it to break open hidden reservoirs of oil and/or natural gas. After cracking open fissures, the fluid is pumped up to the surface, where it’s called produced water. The problem is, produced water emerges from the ground dirtier than it entered.

“You’re tapping into a petroleum-containing unit, so there’s hydrocarbons there,” Burgos says. In other words, some of the oil and natural gas that gets pumped from the well end up in the produced water on its way out. And other contaminants find there way into the fluid, too.

At the Marcellus shale, a natural gas formation that underlies much of Pennsylvania where Burgos did his research, some of those contaminants include radioactive radium, uranium and thorium. In addition, produced water contains heavy metals like arsenic and mercury, which are toxic in even modest amounts. Perhaps less frightening—but no less harmful—is salt: Produced water emerges so salty that it’s generally referred to simply as “salt water”.

One generally measures salinity based on the weight percentage of salt in water, Burgos explains. For example, sea water is generally around 35,000 milligrams per liter of total dissolved solids (tds). In other words, if you were to take a liter of ocean water and let it evaporate, you’d be left with 35,000 milligrams of salt. That’s about .07 pounds, or roughly three-fourths the weight of your standard golf ball.

There are three things that you can do with produced water. You can store it underground in injection wells—the culprit behind Oklahoma’s earthquakes. You can clean it up somewhat on site, and reuse it in another well. Or you can send it out to a third-party processor, a discharge facility, who will clean it up for you before releasing it into a surface water environment.

“The waste water effluence that we pulled from the discharge facilities were upwards of 200 and 300 thousand milligrams per liter of total dissolved solids,” says Burgos. “That’s not just salty water; that is a brine.”

Brine might be great for prepping your Thanksgiving turkey, but it’s not awesome for the environment. Fish and plants that evolved to live in a freshwater ecosystem die off as the water gets saltier. Even animals that thrive in saltwater ecosystems have a threshold beyond which things are simply too salty. There’s a reason why the Dead Sea, which is roughly ten times saltier than your standard ocean, doesn’t harbor much in the way of sea life. Few animals and plants can hack the extreme saltiness.

Burgos and his colleagues didn’t just look at the effluent from discharge facilities, however, because fracking reserves are spread out over space—and the activity varies with time. You could measure stream water chemistry one day and not get any relevant data because the facility wasn’t discharging, or because the produced water they were treating that day was cleaner than that from a different location.

Instead, they took sediment core samples from a reservoir that was downstream from two fracking discharge facilities—one was located 6.2 miles away; the other 12 miles away. Sediment samples don’t just show the impact of the discharge facilities over time, but also allow researchers to see what the pollution load was like before the facilities began operating. Burgos and his colleagues found that even though peak industrial activity had occurred between 5 and 10 years prior, sediment layers corresponding to those years still contained higher concentrations of salts, organic chemicals, and even radium and strontium.

That level declined as fracking well operators chose to comply with a voluntary ban on sending produced water from Marcellus to these centralized waste treatment plants. Additional research is needed to identify the longterm impact of fracking on aquatic systems, but the evidence isn’t looking great. In one 2011 study, the Forest Service spread 75,000 gallons of produced water over a quarter acre of the Fernow Experimental Forest in West Virginia. Within two weeks, all ground plants in the area were dead.

“We live in a state that has a lot of hydrocarbon resources and has a long history of fossil fuel extraction,” says Burgos. “So, the issue is just trying to highlight to people some of the environmental concerns that occur during the development of these resources.”