The planet is pretty much ready to go 100 percent renewable by 2050. 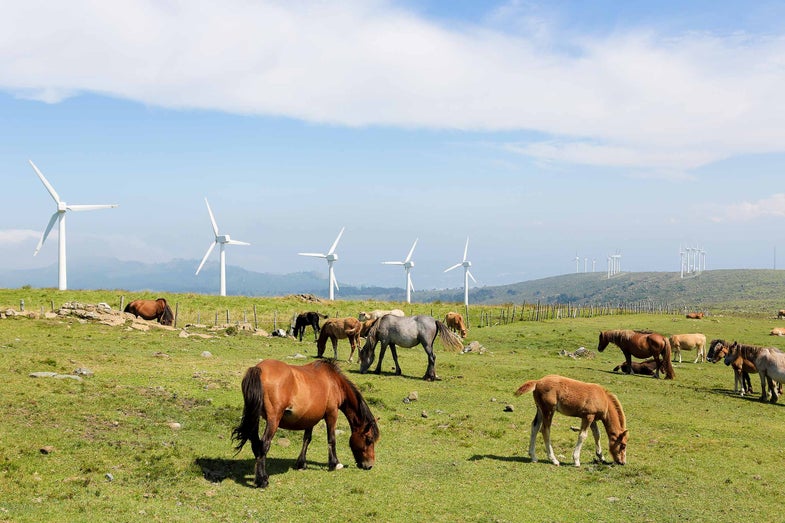 The country’s energy mix is under scrutiny. A report commissioned by Energy Secretary Rick Perry acknowledges that low natural gas prices—not renewables—are behind the recent closure of coal energy plants, and that the grid has managed to withstand the increasing presence of renewable energy. According to an unrelated study published this week in the journal Joule, the world is poised to give up fossil fuels altogether.

The research lays out renewable energy roadmaps—the mix of resources a given country would need to transition away from fossil fuels to renewable energy—for 139 countries collectively responsible for more than 99 percent of the global carbon emissions. According to the resulting analysis, the planet is pretty much ready to go 100 percent renewable by 2050.

Fossil fuels like coal, natural gas, and oil are not renewable resources. It took an extremely long time for the Earth to produce them, and they’re going to run out. And now that we know them to be significant contributors to human-caused climate change, trying to replace them is basically a no-brainer. Still, many regard renewable energy as the flighty, less dependable sibling of our go-to fossils. But according to the United States Energy Information Administration (EIA), renewable energy sources accounted for roughly 15 percent of total electricity generation and 10 percent of total U.S. energy consumption in 2016. Some of that investment in renewable energy is being led by places that we tend to associate with petroleum, like Texas, where wind energy provided more than 12 percent of that state’s electricity in 2016.

Even the United States military has vowed to get 25 percent of its energy from renewable sources. And this is more practical than environmental: A hybrid electric tank uses less gas, and doesn’t need to refuel as often. Also: solar panels don’t explode the same way a gas tank does.

But could the world really give up on fossil fuels entirely? Jacobson and his colleagues used available data to assess how much wind, geothermal, and solar energy each of the 139 countries they studied has at its disposal, and how much of that it would take to achieve 80 percent renewable energy usage by 2030 and 100 percent by 2050.

“I was surprised by how many countries we found had sufficient resources to power themselves with 100 percent wind, water, and solar power,” says Jacobson. The countries could all function using the renewable energy potential contained within their own borders, and most could do it while relying mainly on technologies that already exist.

For small nation-states, like Singapore, the task of going totally renewable would be hard—but doable. Most countries could manage by mixing energy generation into existing landscapes—putting solar panels on rooftops, for example, or placing wind turbines on ranch land—while also creating dedicated renewable energy power plants like solar farms.

And according to the researchers, this process would actually decrease the amount of land dedicated to energy production overall.

“The entire renewable energy footprint […] is on order of 1.15 to 1.2 percent of the world’s land,” says Jacobson. “But keep in mind that 20 percent of the world’s land is used for agriculture. In the United States, if you just look at oil and gas, there are 1.7 million active oil and gas wells and 2.3 million inactive wells. Collectively they take up somewhere between one to two percent of the U.S. land area. And that’s not counting the refineries, the pipelines, or coal and nuclear infrastructure.”

And then there’s the fact that we wouldn’t have the oil spills and chemical leaks associated with transporting and refining fossil fuels. Renewable energies involve a relatively fixed amount of land use; wind and solar energy doesn’t run out, so a solar farm erected today will still be pumping out electricity in a few decades. And even as those panels wear out, new ones can be erected on the same site. Coal seams run out and oil wells run dry, so we’re constantly pressing new locations into service. Tens of thousands of new oil wells are drilled annually.

“We would reduce, we think, the footprint on the land,” says Jacobson.

The study builds on earlier research by Jacobson that analyzed the technological feasibility—and the socio-economic benefits—of switching to renewable energy. That research suggested that the gradual shift to 100 percent renewable energy would lower the social cost of energy, especially deaths associated with fossil fuel pollution.

“With oil and gas, you have to keep drilling and mining, and pollution keeps going on forever,” says Jacobson. “Worldwide, we have more than 4 million air pollution deaths from it. Things have to change—they’re not sustainable as they are.”

He calculated that renewable energy could prevent 4.6 million premature deaths a year by 2050, simultaneously adding 24.3 million jobs to the economy. It would also save more than $50 trillion dollars a year in climate- and pollution-related costs.

The first major step is (literally) electrifying: if all energy sectors (including transportation, heating/cooling, industry, and agriculture) start running on electricity instead of gas and oil, a nation’s overall energy usage goes down.

That’s one reason why both France and Britain are pushing to ban all non-electric cars by 2040. Germany is working toward a ban on internal combustion engines by 2020.

“By electrifying everything, just doing that, the power demand will go down because of the efficiency of electricity,” says Jacobson. Averaged across sectors, there’s a 23 percent reduction in energy demand just by switching to electricity. And when that electricity comes directly from renewable sources like solar and wind instead of coal, the savings keep getting better. According to Jacobson, 12.6 percent of global electric energy use goes toward mining, refining, and transporting fossil fuels (and uranium for nuclear power). Electrification plus a switch to renewables leads to a 36 percent reduction in demand—with no significant change in quality of life.

“We think a transition is possible and its beneficial in multiple ways, and there’s little downside to a transition,” says Jacobson. “Like anything, you don’t want to change—and it’s hard to change if something is working right now. But right now things are working with humongous side effects.”