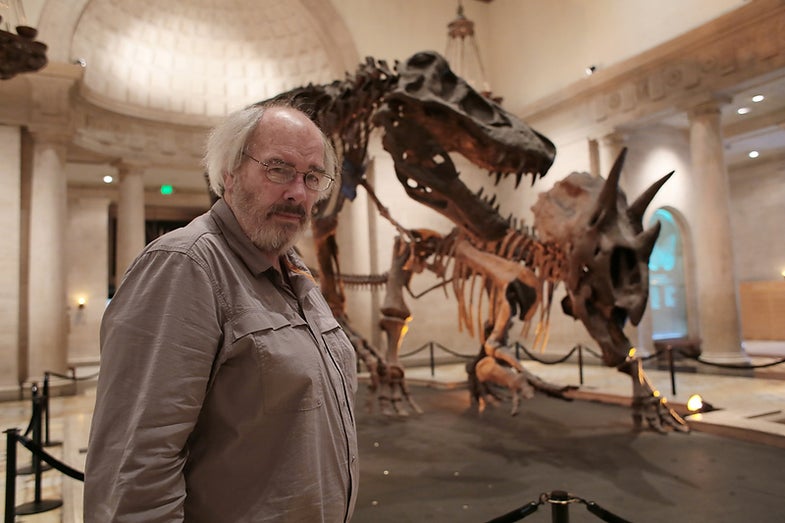 Here at Popular Science, we can’t wait to see Jurassic World, which opens in theaters nationwide today. I mean, who can resist velociraptor biker gangs:

But we were also curious about the real scientific research that inspired the movie. So we talked with Jack Horner, a noted paleontologist who has consulted on the entire Jurassic Park movie franchise, including Jurassic World.

This interview has been edited for clarity.

Popular Science (PS): There was a paper a few weeks ago that mentioned creating dinosaur-snout shaped beak in chicken embryo. Does this method have more promise than building a dinosaur from DNA? Are you working on something similar?

Horner: First off, I think their project was fabulous. It’s a terrific concept, right? I don’t care how we make a dino-chicken, or how we bring back dinosaurs, I don’t care who does it, I just want to see it done. So if a group at Harvard or Yale can do it, that would be fantastic and if we can find a few characteristics here in Montana, that would be fantastic as well.

What we’re doing is trying to identify the historical pathway that evolution took to get from dinosaurs to birds. Then we can just reverse that and go back to having an animal that looks kind of like a dinosaur.

Horner: In the evolution of birds they’ve lost their tail and they’ve also transformed their arms and hands into wing. We basically need to reverse those things.

Transforming the beak back into a dinosaur-like mouth…I had no idea, I was just thinking of a way to get teeth into the bird. A fellow named Matthew Harris at the University of Wisconsin figured that out, so now we can do teeth and we can do beaks. We’ve basically got the tail and the arm to go. We’re 50 percent there.

PS: Will we ever see something like Jurassic Park, given that people seem to be moving forward with this kind of research? When?

Horner: Well, there’s reason not to. Not the movie kind of Jurassic Park. For hundreds of thousands of years we’ve been breeding animals. We started with wolves and we ended up with Chihuahuas. We don’t need to put them in a park of any kind, we have them in our houses. What we do with these modified animals is really up to us. I don’t know that we need to make parks for them. We modify cows, horses, cats and dogs all sorts of things. Maybe we’d have dinosaurs as pets.

PS: That would be pretty incredible. Would the end result be species like we see in the movie where we have these iconic dinosaurs like Triceratops and T-Rex? Or would these genetically engineered animals be something new that we might not have seen before in the fossil record?

Horner: In Jurassic World we have Indominus rex, a genetically modified hybrid dinosaur that’s based on dinosaur characteristics from a variety of species and a bunch of characteristics from other kinds of animals. This kind of genetic engineering we are doing right now. We can make new kinds of animals right now. Glowfish are a very good example, where you take a glow gene out of a jellyfish and stick it in a zebrafish and make it glow in the dark. We can use that same gene and put it in basically anything. You can have glow rabbits and glow chickens. You name it we can make anything glow. A transgenic dinosaur is actually easier to make than one of the real ones.

Horner: Right, because we don’t have T-rex DNA. To make an exact copy of something that’s gone extinct would be a little difficult probably. But once we understand what genes do and how to turn them on or turn them off we can make whatever we want I suppose.

PS: You mention the genetically modified dinosaur in Jurassic World, and that’s obviously something that’s being mirrored in the science we’re seeing today. You’ve worked on these films since the beginning. Has it been a challenge to keep the movie’s vision and the scientific research on roughly the same page?

Horner: In Jurassic World, the new one, we have a genetically modified dinosaur that’s actually more plausible than bringing back dinosaurs from the historic past. So we’ve basically caught up to science.

PS: How long do you think it will be before we see something that resembles a dinosaur?

Horner: That depends on your definition of resemble. But if we were to get a long bony tail on a bird and transform its wings the two more characteristics we’ve got, we’d have an animal that looked for all the world like a dinosaur

I think we can certainly do that within the next 5 to 10 years.

PS: So there’s one group that’s created the teeth, one group with the beak, and you’re working on the tail and the arms. Will it be a challenge to combine that research? Or once somebody has figured out one aspect is it relatively easy to kind of incorporate that into others?

PS: What dinosaur would you be most excited to see in the flesh?

Horner: [Laughs] Any dinosaur is going to make me happy.