This bird is wearing teeny tiny goggles for science

There are also lasers 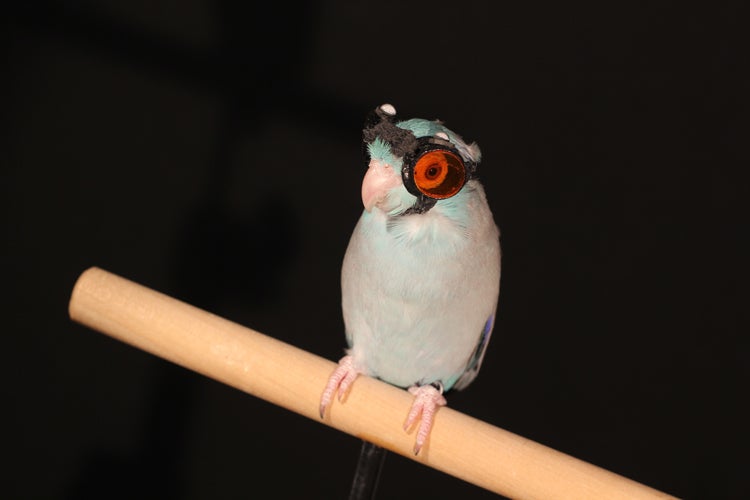 Obi is looking fly in his custom eyewear. The orange safety goggles, adorned with tiny reflectors, fit securely over his little feathered head. But Obi the parrotlet isn’t wearing these goggles to make a fashion statement. He’s part of an experiment where he flies through a sheet of lasers so that researchers can see how the air around him behaves as he moves.

In a paper published in Bioinspiration and Biomimetics, researchers tried to observe the wake of a bird in flight. By having a trained bird (Obi) fly through a cloud of tiny aerosolized particles illuminated by a laser sheet, they could figure out how Obi was supporting his body weight in the air, and how the air reacted as he flew through it. Then they could compare that to computer models of bird flight and see if those models matched up.

Because the lasers could have injured Obi’s lil bird eyes by heating and damaging his retinas, the researchers had to find a way to make sure he had a safe flight. So with a mish-mash of materials (veterinary tape, 3D printed sockets, and the lenses from human safety glasses), former graduate student Eric Gutierrez created the most adorable safety gear ever worn.

Obi was trained to fly though the experiment space with the glasses firmly in place. The experiment was successful, but it showed that the current models used to simulate animal flight on computers aren’t accurate.

“Many people look at the results in the animal flight literature for understanding how robotic wings could be designed better,” David Lentink, a co-author of the paper said in a statement. “Now, we’ve shown that the equations that people have used are not as reliable as the community hoped they were. We need new studies, new methods to really inform this design process much more reliably.”

Researchers like Lentink hope that the new paper will help them design better flying robots and drones in the future. Maybe the next generation of robot birds could be called Obi-1?