Carnivorous plants aren’t as cool as you think

But their evolutionary history is 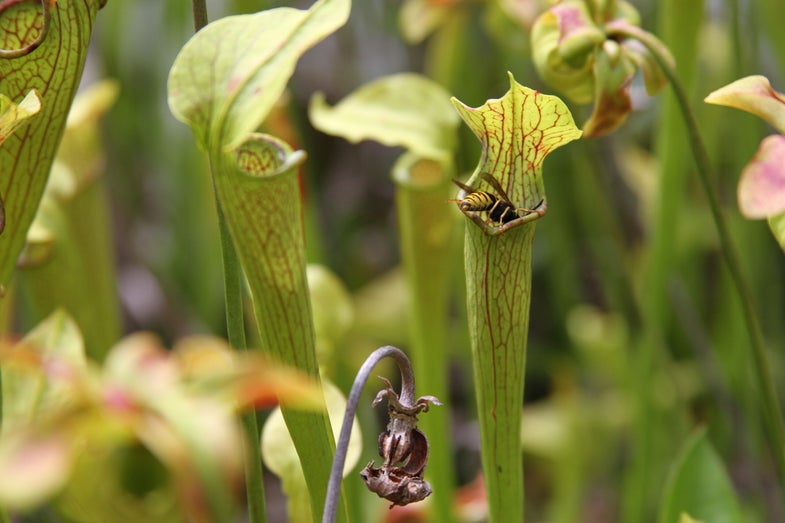 Carnivorous plants seem like the ultimate flora. Not content with wavin’ around in the breeze collecting daylight, they also devour tasty insect flesh. They’re carnivores and they’re plants. They’re redefining what it means to be greenery. Right?

It turns out that carnivorous plants aren’t so much bloodthirsty as they are desperate, evolutionarily speaking. The ability to trap and kill insects is mostly an adaptation to living in places with poor soil quality. It’s evolved separately at least six times and now a new study in Nature Ecology & Evolution shows that the mechanisms by which these plants catch and digest insects are closely related at the molecular level as well.

The general term for the same trait evolving separately in different species or locations is convergent evolution. Birds and insects can both fly. Squid and humans both have camera-like eyes. And carnivorous plants all over the world capture and kill insects for food. Those are all fairly surface-level examples of convergent evolution—the same ability evolved in slightly different ways. Carnivorous plants take that to another level: They actually use similar proteins.

Pitcher plants from America, Australia, and Asia all use related digestive enzymes to break down their prey, even though each species evolved their strange appetite separately. That suggests there are limited ways for plants to produce digestive enzymes—the odds of the same mechanism evolving three different times is tiny. Some of those enzymes exist in other, non-carnivorous plants as defense mechanisms, so it’s likely that the typically innocuous proteins were repurposed as bug-eating capabilities evolved.

The biologists studied the plants in part by sampling the sticky liquid inside their pitchers and testing for enzymes. They could also compare the genes turned on in the pitchers to those turned on in the normal leaves. That’s a direct comparison because the pitchers—like the traps on Venus flytraps—are just specialized leaves. Before carnivorous plants were carnivorous, they were regular photosynthesizing machines. They lived in bogs and other wetlands that have plenty of water, but not many nutrients. And a few of these pre-carnivores evolved the ability to trap insects, digest their exoskeletons, and absorb nutrients from their carcasses. Those plants survived better in places with poor soil quality because they could get carbon and nitrogen and other nutrients from insects. It was a desperate measure.

For a plant, turning leaves into specialized traps means sacrificing a lot of energy. The traps can’t photosynthesize very well, so you get less energy from the sun—plus it requires a lot of energy to operate a trap.

All of these evolutionary adaptations make for pretty finicky house plants. As much as you’ll want to play with the moving flytraps, prodding them makes them fall off faster—they can only close four or fives times before they curl up and die. Toying with the plant is basically forcing it to waste its limited number of attacks on your finger, which it can’t trap and eat. And you’ll have to feed your plant little bugs if it’s indoors, because—although it can survive on photosynthesis alone—it only thrives when it consumes insects.

Even if you never play with it and carefully feed it flies every day, you’ll probably still kill your carnivorous plant with tap water. Since carnivorous plants evolved to live in nutrient-poor soil, the minerals in most tap water overwhelm the roots. You’ll have to purify special water for your supposedly menacing carnivore. And there’s nothing worse than a picky eater.