Bioart and the Gnawing Invisible

The future is surreal: a curator looks into the convergence of art and biotech 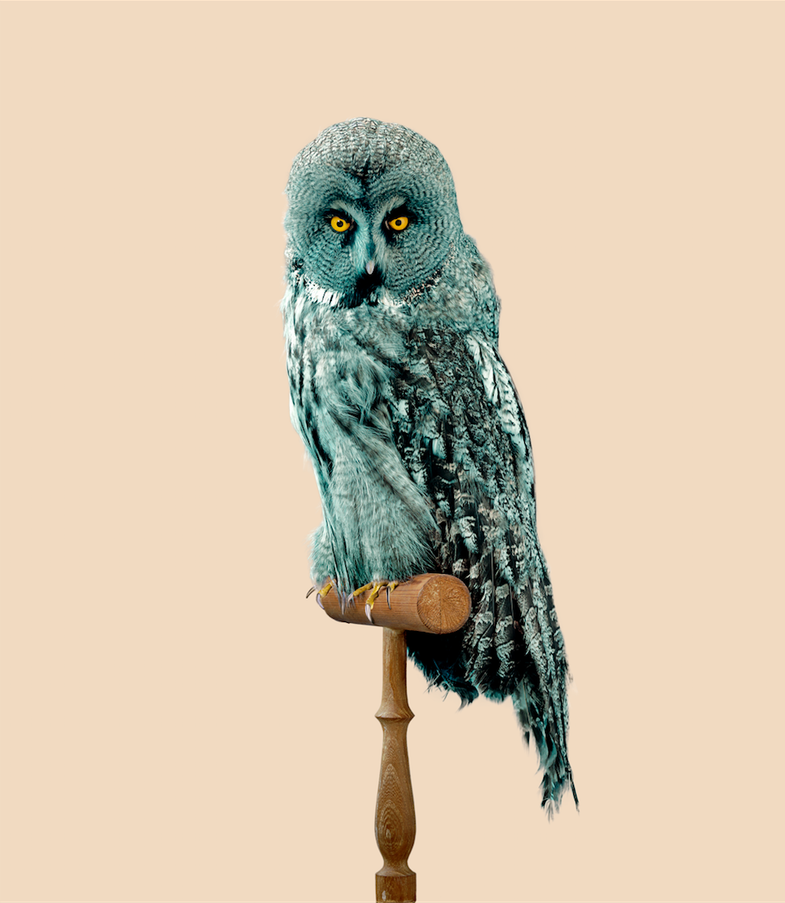 In my life as a curator, only twice have a pair of eyes in an artwork ever really mesmerized me. The first pair gazed out from a painting by German surrealist Max Ernst called Human Form. The image wasn’t ‘human’ at all. It was a chimera, a blend of plant, insect, and human, giving a friendly wave but staring with eerie orange eyes.

I met those eyes again in a photo illustration from a century later. They were the eyes of an owl, an imaginary creature genetically engineered to survive in a landscape spoiled by the Anthropocene. Bioartist Vincent Fournier had created a menagerie of these beasts in a series called Post Natural History. The similarities in form between the two works separated by a hundred years was unmistakable, and loudly hinted of other, deeper parallels between bioartists and surrealists: in their intentions, techniques, and the larger historical forces urging them to create.

The surrealists may be long gone, but it seems that they’re not through with us yet. Their project lives on in work like Fournier’s. This time though, rather than bending consciousness with melting clocks and impossible landscapes, bioartists are using living organisms, DNA, human tissues, and their representations to bend our concepts of ourselves and the living, interconnected world around us.

At the turn of the century, the European surrealists were shaped by two sweeping changes to human life—World War I and the advent of psychoanalysis. WWI had shattered trust in the Age of Reason. So-called rationality had led to a worldwide orgy of brutality, breeding death at a speed and scale previously unknown. It allowed for tragedies like the Battle of the Somme in 1916, where a staggering 70,000 casualties were suffered in a single day. Simultaneously, the Spanish flu (so named, because only neutral Spain was honest about the death rates) claimed some fifty million lives, about 3 percent of the global population.

The reality of such horror bred disillusionment with modern life. In reaction, the surrealists traded reason for theories of the subconscious introduced by Sigmund Freud. They aimed to unburden themselves of aesthetic and moral conventions; they grew fascinated with art from those ‘untainted’ by society, like mental patients and children. They sought deeper, unseen truths by materializing dreams, tapping into unconscious thought, and giving voice to suppressed desires. The artistic results were enticing, if nonsensical, as in their practice of free-form, automatic writing:

Today, we stand at another critical juncture. The mapping of the human microbiome, the emerging field of epigenetics, and other biological phenomena are shattering our understanding of identity. Biologists are discovering that non-human life is essential to our survival. The microbiome influences our digestion, immune response, and even psychological health. It is akin to a newly discovered organ. And with epigenetics, scientists are discovering that behaviors and experiences from past generations can affect gene expression in our bodies today, putting us in a new, perhaps uncomfortable, continuum of responsibility across generations.

In light of this increasingly sophisticated tinkering, I expect our concept of evolution to shift. If we continue to shape whole ecosystems by introducing genetically modified species—as  we have already done with agriculture—then evolution will be undermined. Reproductive success as a driving force of change will fall second to the decisions of humans wielding the ability to design life. Human need, and inevitably human whim, will become the primary driver in shaping nature—if it can still be called nature at that point.

Because the bioartists recognize these and other sweeping changes in this so-called golden age of biology, their work can do much more than conjure previously invisible forces like the unconscious (as the surrealists had done before them), or record the new realities of life and nature. Their work offers new ways to think about how our shared concepts of identify, nature, and environment are changing, and what this means for everyday life.

Driven by a gnawing need to interpret these environmental, biological, and cultural shifts, bioartists prompt us to rework our notions of beauty, rethink our politics, and realign our relationships with the living world within and around us. As such, engaging with bioart is more than just passive observation—it’s a kind of language lesson, providing vocabulary to illuminate the ideas, possibilities, and crises of the coming biotech age.

As was the case with Ernst’s human and now Fournier’s owl, the eyes stare back at us because they dare us to take the next step into a strange, threatening—but maybe also exhilarating—future.

A longer version of this essay appears in Bio Art: Altered Realities, by William Myers, published by Thames and Hudson (October, 2015).

Julia Lohmann, Co-Existence (2009): Each ‘pixel’ in the figure is a petri dish representing the culture of bacteria found in that region of the human body.
art
biodesign
biotechnology
Science