What’s the Biggest Thing a Carnivorous Plant Will Eat?

And should we humans be worried? 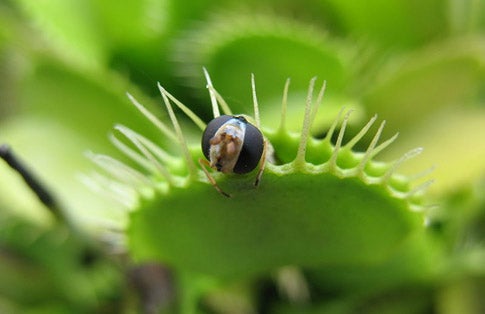 Carnivorous plants generally stick to a diet of bugs that they ensnare. On rare occasions, though, tropical pitcher plants—which drown and break down prey in vase-shaped traps that can be smaller than a little finger or larger than a football—have been found holding the skeletal remains of frogs, geckos and even small rodents. But what about human flesh?

Chowing down on a vertebrate is incredibly dangerous for the plant, says Barry Rice, conservation director for the International Carnivorous Plant Society and author of Growing Carnivorous Plants. It takes a long time to digest meat, so the meal could rot prematurely, killing the trap.

That’s not to say that a giant meat-eating plant wouldn’t have a taste for humans. While recovering from a case of athlete’s foot, Rice fed infected skin to Venus flytraps to see if they would eat it. A week later, he was astonished (and a bit appalled) to find barely a trace of his skin remaining in the traps. Healthy skin and internal organs would probably meet the same end, Rice predicts. “I’m still fond of my fingers, though,” he says, “so I’m not taking the experiment to the next level.”