Plant genetics are so weird. 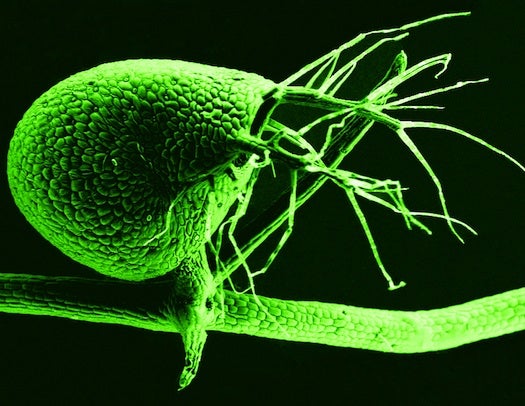 The humped bladderwort is a flower that’s as strange as its name. It grows in mats in shallow water, it doesn’t have true roots, and it bears small, inflated, hair-triggered bladders that it keeps underwater. Any time a tiny swimming animal brushes past one of these bladders, the bladder expands, opens its mouth, and then sucks the animal up and digests it. It’s like a Venus flytrap and vacuum in one.

Now, an international team of biologists has found yet another weird characteristic of the Utricularia gibba. It has a remarkably efficient genome. Many life forms have lots of DNA that isn’t contained in genes, which are defined as stretches of DNA that contain the code for making proteins. About 98 percent of human DNA doesn’t code for proteins. For the humped bladderwort, on the other hand, the numbers are practically reversed. Only 3 percent of the humped bladderwort’s DNA doesn’t either code for a protein or for genetic material that controls the genes that make proteins.

Those aren’t questions that a freaky freshwater plant can answer. But the bladderwort’s genome does suggest that at least some organisms get by with very little non-protein-coding DNA. The humped bladderwort still has a comparable number of protein-coding genes to other plants, although most other plants have much more non-protein-coding DNA. With about 28,500 genes, Utricularia gibba has more genes than papaya plants, grapevines and a small flowering mustard relative called Arabidopsis thaliana. (But fewer genes than a tomato.)

Because some plants have a lot of non-protein-coding DNA while others have trimmer genomes, more like Utricularia gibba‘s, the study authors hypothesized that some species intrinsically tend to destroy non-essential DNA, while some species don’t. Neither keeping nor destroying non-essential DNA is better, evolutionarily, the researchers wrote in a paper they published about their findings. It’s a neutral process that’s helped give rise to the diversity in genome sizes in plants.

That’s not to say animals would do fine if they cleared out their non-protein-coding DNA. In plants, there’s another common genetic process that may help those that tend to get rid of their non-protein-coding DNA. Many plants have several duplicates of their entire genome—in some plants, it helps make really big fruit—which may protect the essential parts of the genome from deadly mutations. In its evolution, the humped bladderwort has duplicated its genome at least three times, the study authors found.

The researchers published their findings May 12 in the journal Nature.