Could dragons be real? Not in the way we think.

Let's compare the flying assassins in ‘House of the Dragon’ to real-life lizards and dinosaurs. 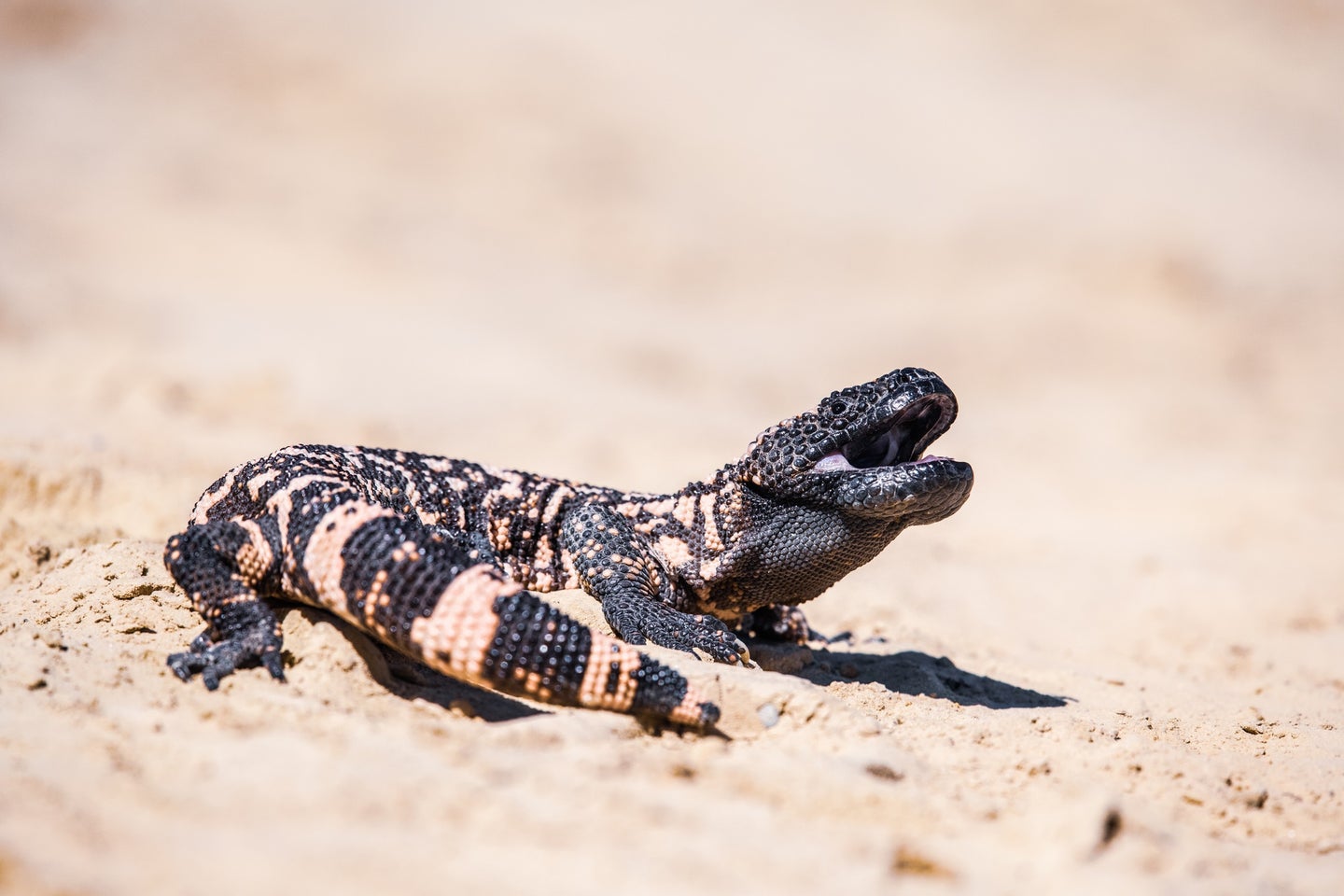 The Gila monster's raised scales give it an armored appearance, not unlike a dragon's. And then there's that valuable venom. Deposit Photos
SHARE

When it comes to dragons, the human imagination has been stuck in one gear for centuries. Whether it be the Loong dragon of Chinese astrology, the Fafnir of Viking legend, J. R. R. Tolkien’s Smaug, or Westeros’s “fire-made flesh,” the formula of flight, ferocity, and volcanic breath hardly changes. Which leads us to ask, are these storytellers onto something?

The new HBO drama House of the Dragon gave us an excuse to bug some reptile and dinosaur experts, and have them share their scientific interpretations of these magical hellfire beasts.

Riley Black, paleontology writer for PopSci and many others

The House of the Dragon reptiles look pretty ho-hum to me. They are your standard Western dragon we’re all pretty familiar with, pretty much all the same form and likely the same species, and are only about as different from each other as two Komodo dragons. In a show boasting 17 dragons, I would have loved to see some of the many other forms dragons have taken in mythology and folklore, whether that be a many-headed hydra, a legless wyrm, or an Eastern dragon, similar to the Chinese dragons with antlers and fish fins.

In Game of Thrones, Reign of Fire, and Dragonheart, the obvious dragon characteristics include a giant size, leathery wings, and the ability to breathe fire. Some of these traits are more plausible than others. Giant reptiles have soared over the skies, so large that they could travel between continents. Quetzalcoatlus was a pterosaur with a wingspan about 33 feet across. That’s pretty impressive, especially when you consider that this flier was the same stature as a giraffe on the ground. It also flew on wings made up of a resilient membrane stretched out on an extraordinarily-elongated fourth finger, so that’s getting pretty close to traditional dragon territory. Of course, Quetzalcoatlus was pretty light for its size—in the neighborhood of 200 pounds—meaning that those House of the Dragon stars look a little too massive to be airborne. Pterosaur bones are paper thin and were likely much more fragile creatures than the burly dragons on our televisions.

[Related: This dragon-like reptile once soared over Australia]

Fire is a trickier one. We know that some insects can spurt chemicals that combine to burn attackers, like the bombardier beetle does. That might be an evolutionary route that a proto-dragon could take, combining chemicals in the body to create something that burns even if it’s not technically fire. Many snakes and lizards produce venom, after all, and it makes me wonder if there might be a pathway where venom could become more corrosive or take on a different character—with appropriate adaptations in the mouth and throat to not burn or harm the reptile itself. But, no surprise here, spitting actual fire is entirely fantasy and there just isn’t a biological pathway such death breath could evolve.

If the House of the Dragon CGI designers are looking for inspiration, though, the fossil record offers plenty of options. Mosasaurs, for example, were about as close as we’re ever going to get to “sea dragons.” These marine reptiles were related to monitor lizards; some of them grew to lengths of 50 feet or more, and had tail flukes and streamlined scales. They gobbled up fish, crunched through ammonite shells, and even ate each other during the Cretaceous Period (more than 66 million years ago). The Spinosaurus—with a sail along its back, crocodile-like snout, and paddle tail—and Deinocheirus—a huge herbivore with giant arms tipped in large claws, a hump on its back, and a duck-like face—look akin to a dragon, too.

I’m just glad that the House of the Dragon reptiles are technically wyverns in that they have two hind legs and arms as wings, rather than having four legs and an additional pair of wings. The second interpretation would technically be a hexapod, and would require some kind of gene duplication event—as happened with our own fishy ancestors—to create another pair of appendages that could be modified into wings, which no vertebrate has done. As fanciful as they are, the Targaryen dragons make a touch more evolutionary sense, even if they are too large and belch fire.

Dragons would look really similar to lizards—we have many that already get the dragon name. But they would serve in the role of larger reptiles and predators like Komodo dragons and Nile monitors, and perform those functions in an ecosystem. A smaller dragon would potentially be semi-aquatic. When water is available, it would swim and hunt native fishes. But when the water dries up, it would go into a more terrestrial state. I could easily see them undulating.

Like dragons, lizards are interesting as a whole. People think they just eat insects, but they can be pollinators. There are marine iguanas in the Galapagos that dive into the water to eat seaweed. And then there are the carnivores that eat birds, eggs, and other lizards.

In the Southwest US, we have the Yarrow’s spiny lizard, which sports beautiful scales and designs like a dragon. We also have the Gila monster with its beaded scales and venomous bite. You can’t get much closer to a dragon than that.

Marine reptiles were surely sea dragons that evolved rapidly in the oceans back in the Mesozoic Era (between 256 and 61 million years ago). For example, ichthyosaurs, long-necked and short-necked plesiosaurs, and mosasaurs were diverse top predators that had several morphological adaptations for locomotion and feeding. Sea dragons were toothy and efficient swimmers that filled a broad range of sizes and ecologies, reaching up to 45 to 60 feet in body length. Some were highly specialized cutters, crushers, piercers, crunchers, and smashers that were part of complex trophic networks not seen in modern marine ecosystems. Certain species used undulating tails (flattened or with fluke) or paddle-like fins; others had fish-like bodies and specialized flippers to swim and hunt. In terms of reproduction, the sea dragons did not lay eggs on land but gave birth to live young.

If dragons were real, I would definitely picture them living in an absolutely fascinating marine ecosystem just like the early Cretaceous oceans, where they would “fly” through the epicontinental oceans full of prehistoric creatures. They wouldn’t have to breathe fire underwater to finish off a fight: Pliosaurs had one of the highest bite forces of any known animal, and could have swallowed a person in just one bite.

Kai Wang, herpetologist at the Kunming Institute of Zoology, Chinese Academy of Sciences

It depends on what you call a dragon. Many dragon-like animals existed in the Earth’s history. Some were really big reptiles, similar to the large monitor lizards that live in the Eastern Hemisphere today. Others were clearly not lizards, though we have no physical remains. The giant sister snakes Tren-Tren and Kai-Kai from Mapuche legends perhaps came from real dinosaur bones in Chile and Argentina. The Mokele M’bembe from Congo is clearly not a lizard, and is proposed to be a living sauropod dinosaur. But we have no more evidence than oral tradition yet.

[Related: A giant sauropod skeleton has been found in Portugal]

Let’s remember that dragons were constructed in mythology as humans evolved. Most of them were imagined as lizards with similar characteristics and attitudes. However, no large, flying, fire-making dragons probably existed.