The model, with its four big ducted fans, is on display at CES 2020. 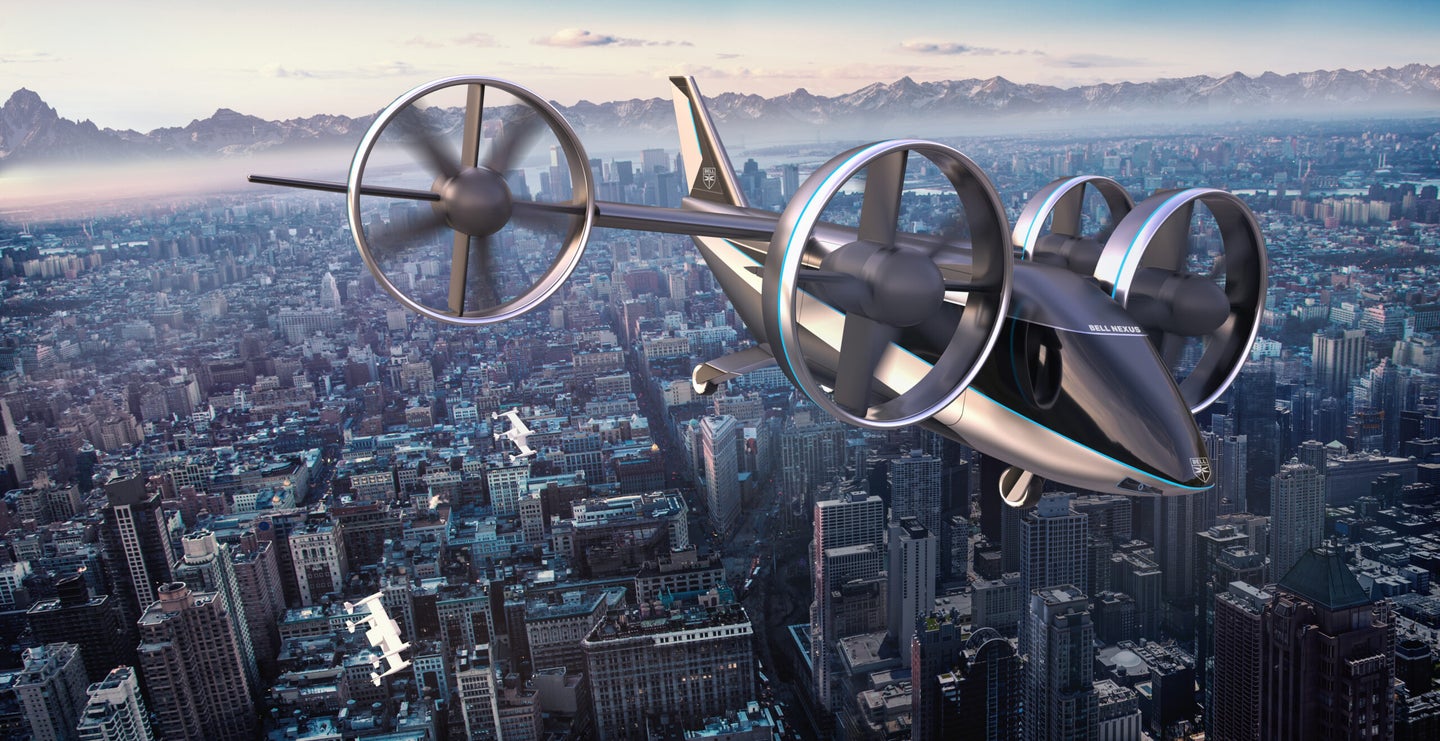 A rendering of the latest version of the Nexus air taxi concept from Bell. Bell
SHARE

If you have a great deal of disposable income and need to get someplace very quickly, you might hop in a helicopter. But a new generation of flying machine, one that’s less noisy and dramatic but potentially more affordable, is in development: a class of aircraft that generally do something like what helicopters do, but run off electric power. And by the end of the decade they might even be something you could book a ride on around an urban landscape, such as through an Uber-like on-demand network.

Bell, the flight company that makes helicopters, as well as tilt rotor craft like the V-280 Valor, is showing off their latest machine in this category at the Consumer Electronics Show in Las Vegas. It’s called the Nexus 4EX. Last year, the company unveiled an earlier iteration, and now, they’ve simplified its design by reducing the number of thrusters that push it through the air.

Bell claims that the Nexus craft should be able to wing some 60 miles, hit 150 mph, carry five people total, and do so all with electric propulsion. It flies thanks to four fans (technically, they are called “proprotors”) spinning inside ducts, which are the big circular components attached to the sides of the craft. Those give it thrust. The fans allow the machine to take off and land vertically, but they can also pivot to point backwards and propel the plane forward in horizontal flight.

The model the company previewed last year had six ducted fans. With two fewer of them now, “the vehicle becomes cleaner, aerodynamically,” says Scott Drennan, vice president of innovation at Bell. The new design allows them to shave some weight off, too, so it can cruise more efficiently.

When the craft is cruising, its wing gives it lift, just like a regular plane. But so do the carefully designed ducts that enclose the spinning blades. “If you were to cut a cross section through them, you would see an airfoil shape,” Drennan explains. “That airfoil shape essentially creates a ring wing.” The top and bottom parts of the ring in horizontal flight—the sections that would be parallel to the ground—are what generate the lift.

Multiple motors power each ducted fan, and onboard batteries supply them with the juice they need. Last year’s version of the Nexus was a hybrid design that included a combustion engine, but Bell is now prioritizing the all-electric conceit, citing market demand. Drennan notes that a hybrid design is still in the works, though, with a fuel-powered turbine and generator that creates electricity to power the ducted fans directly. That would allow it to travel further, as much as 150 miles or more.

Keep in mind that Bell has not yet flown a Nexus prototype, and it’s also not the only company working in this space. Other firms have flying machines like this in development—the industry jargon for them is eVTOLs, for “electric vertical take-off and landing” craft.

In fact, car maker Hyundai also just revealed their plans for a flying taxi; they’re one of the companies collaborating with Uber to help usher in a future where you may be able to use an app to summon a rideshare that flies. Like Bell, they’ve designed a battery-powered craft that can travel 60 miles. The S-A1, as they call it, has a slightly higher planned max speed at 180 mph.

Beyond Hyundai and Bell, Boeing has been working on a eVTOL prototype, as has a company called Jaunt and another called Lilium. Meanwhile, a Canadian airline, Harbour Air, is taking a different approach by starting with a traditional-looking seaplane and outfitting it with a new electric motor powered by batteries.

The designs are exciting, but it’s worth remembering that any flying taxi future is still pretty far off. Drennan, of Bell, says that their target for “a fully certified, operational ecosystem” of vehicles like the Nexus is in the mid- to late-2020s.

“We will be flying our prototype between now and then,” he says without disclosing an exact date. In the meantime, expect any long journeys you take through the air to be powered the old-fashioned way: with fuel, in an airplane or helicopter.