Joby Aviation has been working on an aircraft that should sound like "the wind in the trees." 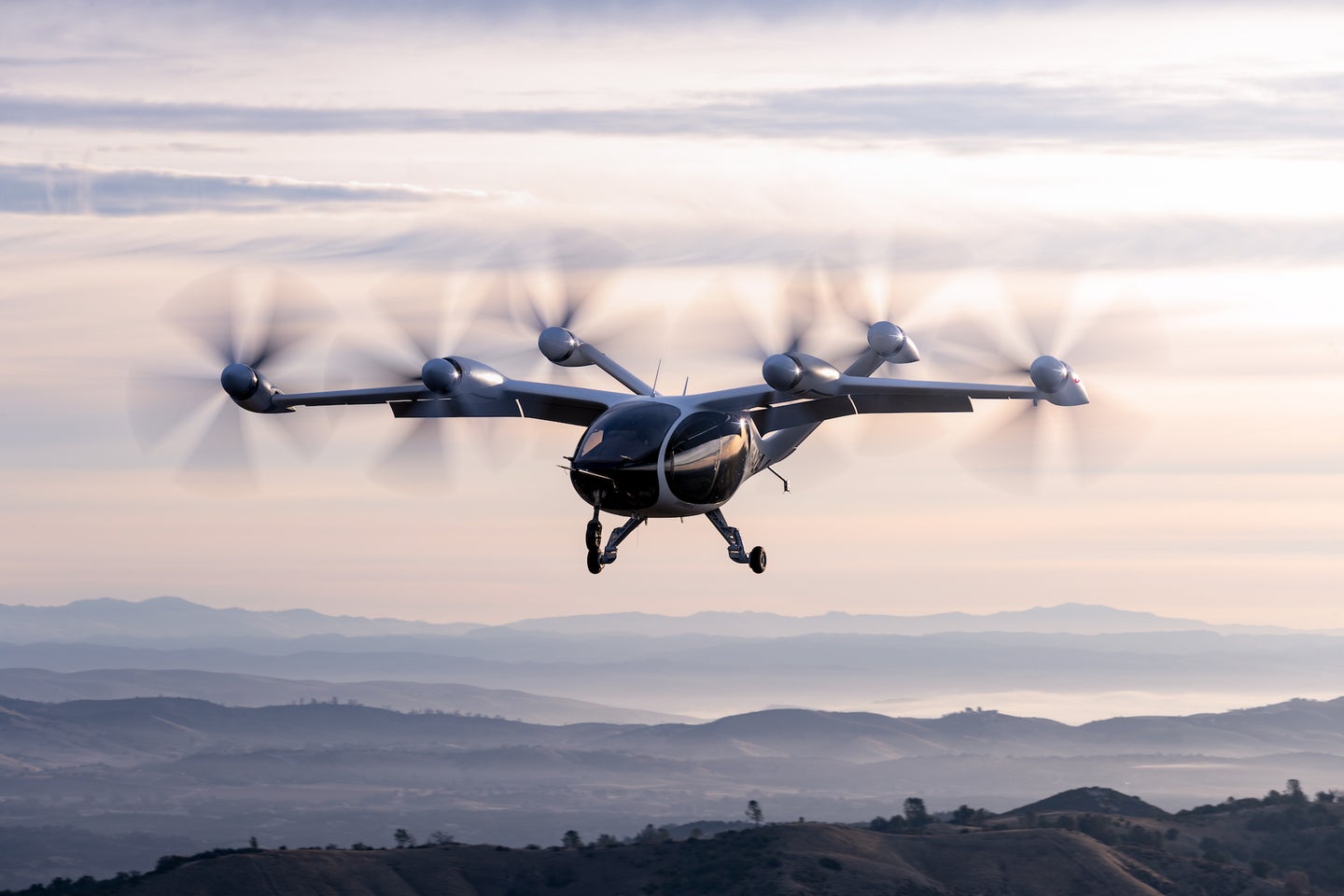 Joby Aviation wants to give you an electric taxi ride through the sky someday. Its aircraft features a half-dozen propellers, each more than 6 feet in diameter. It promises to be able to travel as far as 150 miles and go as fast as 200 mph. It seats four passengers and one pilot.

Like combustion-engine craft that have come before it, the aircraft’s propellers can tilt. That allows it to take off and land vertically like a helicopter, and cruise through the air like a normal airplane. But this craft is electric. Battery-powered motors drive the props. While helicopters make a distinctive chopping noise as their powerful rotors cut through the air, this machine’s sound signature is “more like the wind in the trees,” JoeBen Bevirt, the company’s founder, says.

Joby isn’t making this aircraft to sell it, but instead to offer rides via an urban mobility service. Someday, you might book an Uber to take you over a long distance—the first leg would be a car ride, the second would be via electric aircraft, and the third would be by ground vehicle again.

Here’s what to know about the Joby aircraft and what the company’s plans for it are.

How the Joby aircraft works

Of the craft’s six propellers, four protrude off its wing, and two more from its v-shaped tail. While it’s easy to look at a designed machine and think that it was birthed into the world exactly as you see it today, Bevirt explains that it took some serious evolution to get there.

“We built dozens of different configurations,” he tells Popular Science. “We had versions with different numbers of tilting propellers.” They even explored tail-sitters, he says, which are aircraft like the Bell APT 70 drone that begin and end their journey propped up vertically on their tails. Another example is the Space Shuttle, which launched as a tail-sitter but landed like a regular airplane.

“In the early days, we would come up with new configurations on a regular basis which became our leading contender,” he adds. “And then at some point, we stopped coming up with configurations that were superior.”

While companies such as General Motors have revealed concepts for autonomous air taxis that need no pilot, Joby has built this aircraft to be flown by a human. Two control sticks, called inceptors, allow the pilot to control the craft. Unlike a helicopter, it has no rudder pedals; a pilot uses those in a traditional helo to control which way the nose is pointing.

While this version of the craft requires a human pilot, Joby hasn’t written off a self-flying future. “Autonomy is something that we believe is inevitable in the long run—this is the direction that the winds are blowing in this industry,” says Eric Allison, the head of product at Joby. “I do think that the way to get to market is to have a pilot.”

Redundancy is a key part of any aircraft. If one system fails, another can quickly compensate. Other tiltrotor aircraft, like Bell’s V-280, use internal mechanical systems to ensure that if an engine fails, for example, the remaining engine could still power both of its rotors.

With an electric aircraft like Joby’s, the propulsion system relies on a distributed network of electric motors, inverters, and batteries. Two motors power each propeller, and those motors are in turn each fueled by their own inverter. “We have layer on layer of redundancy across the aircraft,” Bevirt says. “We have triple-redundant flight computers—everything on the aircraft is architected much more like a commercial airliner than a typical small aircraft.”

Even if the company proves the craft’s safety and reliability, it still has to answer the noise question. “There’s a general perception that people have that electric means quiet—but that’s not a given,” Bevirt says. That’s because while electric motors are not loud, the things they spin, like propellers or fans, do make noise. “We’ve spent more than a decade simulating and then building and then testing really quiet propellers.” He says the goal wasn’t just to make it quiet, but to make sure the sound quality is acceptable—not the whop sound of a helicopter, nor the whine of a drone, but instead that promise of “the wind in the trees.”

A quiet aircraft would have obvious military uses, and indeed, the Air Force could utilize Joby’s aircraft at some point. “At the moment, we’re really focused on helping them move goods around bases here in the US,” Bevirt says, of their work with the US government.

‘A throwback to the early days of aviation’

Joby isn’t the only company trying to usher in an era of electric taxi flight, although they’re notable for having acquired Uber’s flying taxi initiative, Uber Elevate, in December of last year. In fact, hundreds of concepts are out there for what flying taxis could look like. “In that mix, there is a small handful of companies that I would say are very serious, and have the potential to bring a product to market—and certainly I think Joby would be leading the pack,” says Elan Head, a helicopter pilot and the editorial director of evtol.com, which covers the burgeoning industry.

Other notable outfits working in the field—which seems to produce companies that have brisk, one-word names—are Archer, Beta, Volocopter, Wisk, and the controversial Lilium.

The fact that this group of firms, and others, are trying to figure out what the best flying machine is for this new type of mission means that what’s happening now is reminiscent of an older era. “It’s really a throwback to the early days of aviation, both fixed-wing and helicopters,” Head says. “If you go back in history, there used to be a lot more diversity in helicopter designs before they converged on a design that actually worked.” Something similar is happening with electric aircraft that can take off and land vertically. “It’s still not clear which of those concepts the industry will converge on as actually being viable,” she adds.

The question of safety looms. On that point, aircraft in this field have both the potential to be more dangerous in the short term—and eventually possibly less hazardous down the road thanks to autonomy. “I think it’s inevitable that there’s probably going to be accidents related to mechanical failures that were not forseen by the designers, or during the certification process,” Head says. “There’s an adage in aviation: Never fly the A-model of anything.”

But with newness comes novel, hopefully helpful features. “Because they do incorporate such high degrees of autonomy, they really do ultimately have the potential to increase safety by an order of magnitude compared to helicopters today,” she says. That’s because helicopters are flown by people, and human pilots can suffer from problems like spatial disorientation.

A new type of transportation

Then there’s the question of ride quality: Will these new aircraft be comfortable for people who are used to commercial airliners, have never climbed into a small airplane before, and may be in the habit of jumping into their Ubers with hot coffee in hand? “It will not be the same as being at 30,000 feet in a 787,” Allison, the head of product at Joby, says. “We think that’s okay—because it’s pretty exciting.”

But before Joby can start schlepping passengers through the skies—which it hopes begins happening in 2024—it needs the aircraft to be certified by the FAA. So while this vision of an air-taxi service could begin in just three years, there’s no guarantee that timeline will hold up in reality.

“We are heads down on two pieces: One is completing the certification, and the second is scaling manufacturing,” Bevirt says. He’s excited about what the future could hold for this new type of transportation. “We are at the dawn of a new age,” he adds. “When you think back through history at the profound impact that the shift from horses as our daily mode of mobility to automobiles [had]—this shift is going to be just as profound.”