This frankencopter could be Uber’s flying taxi of the future

In a few years, you might find yourself zipping around in a helicopter with wings. 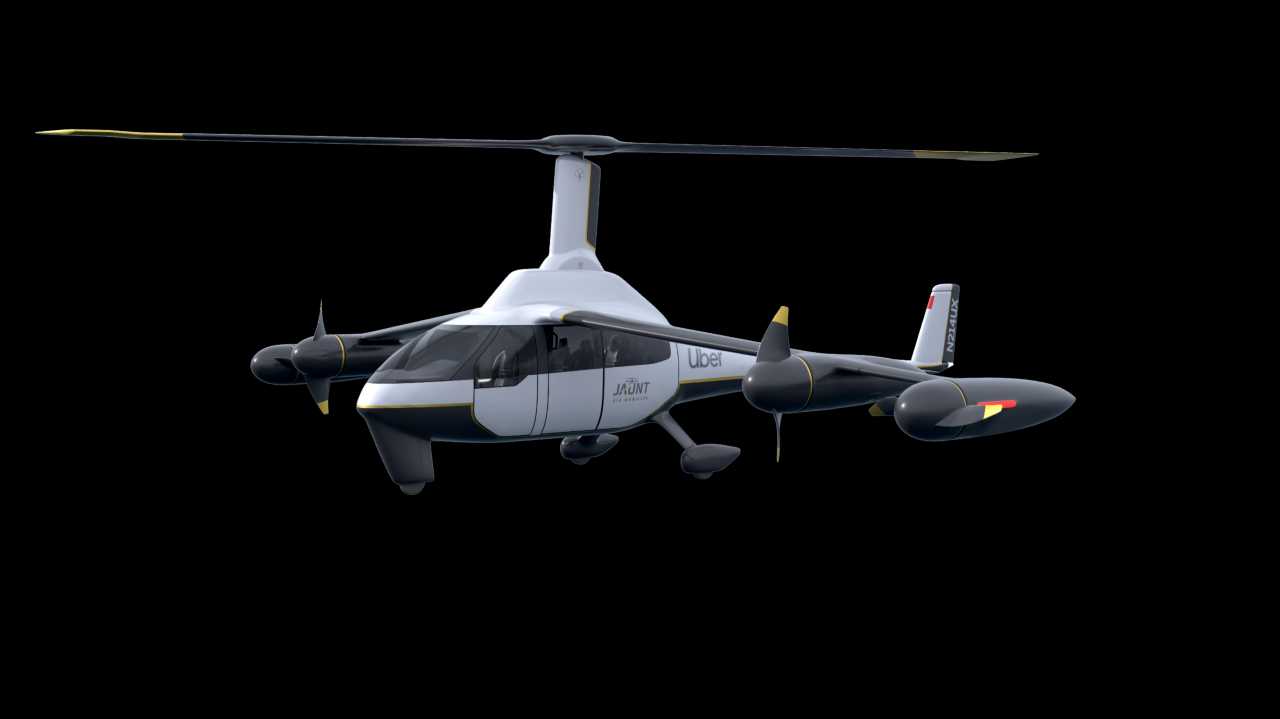 As Uber sees it, someday we might cruise around cities in small shareable electric aircraft. Yesterday and today, the ride-hailing company has been hosting a conference to discuss just that future, which Uber wants to roll out in Los Angeles, Dallas, and Melbourne as soon as 2023.

The company’s newest partner in this endeavour is called Jaunt, and yesterday they revealed a design for a flying rotorcraft that could one day whisk people around urban areas. Like other concepts and prototypes we’ve already seen in this field, it’s an electric vehicle designed to take off and land vertically, and then cruise horizontally from place to place with passengers onboard. And like others, it has multiple electric motors to do that job.

Jaunt’s design is distinctive: it looks like a helicopter merged with an airplane. A large two-bladed rotor on top provides the vertical thrust it will need to take off and land, but wings on the side will give it lift during forward flight, making it fly efficiently. In fact, 95 percent of the lift the craft needs will be coming from the wings as it flies forward, and just 5 percent from the main rotor. The four motors on its wings spin propellers to pull it forward, during which time the top rotor can slow way down. That makes it quieter.

The company advertises this machine as a “reduced rotor operating speed aircraft,” or ROSA. That’s because with a traditional helicopter, the tips of the blades are spinning very quickly—at 60 percent the speed of sound or more. That produces a lot of noise. Jaunt’s CTO, Martin Peryea, says that the tips of the blades on their craft will spin at around 450 feet per second when the machine is hovering. That’s less than 40 percent the speed of sound, at sea level. At cruise, the main rotor is spinning even slower, meaning very little noise is coming from that part of the chopper. That’s an important consideration for a craft built meant to navigate around a densely populated city, but it comes at a cost.

A more rapidly spinning blade is more energy-efficient than a slower-spinning one. So when this Jaunt craft is hovering, that slow rotor is less efficient than it would be if it was spinning fast, requiring more battery power. “That’s a design trade that we make, because acoustics and loudness is very, very important to Uber,” Peryea says.

Running the top rotor more slowly can come with other challenges. “Slowed rotors have traditionally been difficult because of the dynamic forces the rotor imparts on the aircraft; changing the main rotor speed changes the frequency of these dynamic loads, and that could be difficult to manage,” William Crossley, a professor at Purdue University’s School of Aeronautics and Astronautics, notes via email.

You might notice this electric helicopter lacks a tail rotor, which traditional helicopters have to keep them from spinning around in circles. This rotorcraft solves that problem is by using the propellers on its wings to counter the torque of the main rotor: one prop on one wing spins forward, while the other spins backwards.

Keep in mind that this aircraft doesn’t exist yet—it’s just a design. Jaunt hopes to fly it for the first time around 2022, and someday, it could be autonomous. It should be able to cruise at speeds of around 175 mph and its range should be about 75 miles. That main top rotor may be about 45 feet across.

Jaunt is by no means the first company to reveal a futuristic design for a flying machine like this. In fact, Boeing already flew one in a test back in January; they’re also a partner with Uber, as are companies like Bell and Pipistrel. And in May, a Germany company called Lilium showed off a captivatingly cool electric plane with jet-engine-like motors taking flight for the first time, too. Meanwhile, a Canadian airline is working on retrofitting a traditional bush plane with an electric motor. All the electric concepts have one thing in common: they’re not going to travel that far.

Cool things are happening in the world of fossil-fuel-powered helicopters, too, which can fly further. Boeing and Sikorsky are working on a craft called the Defiant, which has two stiff rotors on top that spin in opposite directions. Because it doesn’t need a tail rotor, it has a pusher prop in back to help it go very fast. And Sikorsky has also been working on an autonomous system that could allow Black Hawk helicopters to someday fly themselves. That same type of autonomous tech could also help make a reality of this air-taxi, ride-share future that Uber wants to usher in.