Flying taxis are making progress, one minute at a time

What to know about Boeing's latest test flight, and the 'third era of aviation.' 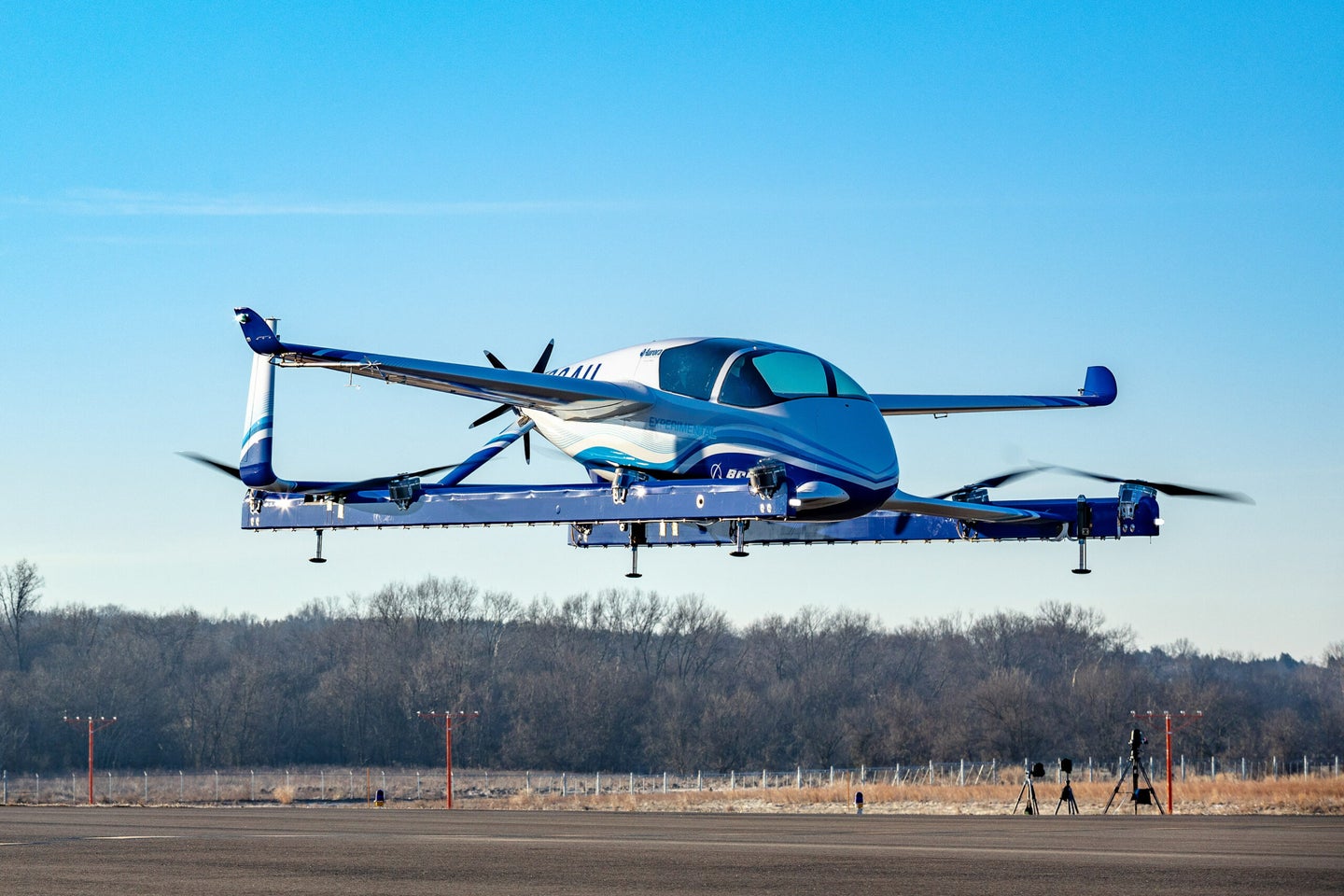 A strange-looking Boeing aircraft took off last week. It hovered above the Manassas Regional Airport in Virginia, and then landed again—the duration of the whole flight was less than 60 seconds, according to a Boeing representative. Eight propellers, all of them powered by electric motors, gave the craft the ability to ascend, hover, and descend.

Boeing and its subsidiary, Aurora Flight Sciences, created the nearly 9-feet-wide, 30-feet-long prototype, but it’s not alone in this space: other outfits are working on hybrid or pure electric aerial craft designed to carry just a few people a short distance.

Boeing is joined by companies like Bell, which showed off a hybrid vehicle with six propeller-like fans called the Nexus at the Consumer Electronics Show; it hasn’t flown yet, and is considered a hybrid because in addition to batteries, the concept also includes a gas-powered turbine that powers a generator. Then there’s Airbus, which is working on both an electric craft called the CityAirbus (which hasn’t flown yet either) and another smaller one, called Vahana, which has. Another entry in the space is Kitty Hawk, which makes an electric craft called Cora that has 12 rotors. And there’s more.

“We all see this as the third era of aviation,” says Greg Bowles, vice president for global innovation and policy at the General Aviation Manufacturers Association; Bowles also contributed to a white paper describing Uber Elevate, Uber’s vision of a flying transportation service. If the first era was propeller planes and “barnstorming,” the jet age was the second. “Most people experience aviation by walking down a big metal tube, into another metal tube, at the large hub-and-spoke airport system,” he says, of this second era. The third era could be made up of machines like Boeing’s, which are generally called vertical take-off and landing craft, or VTOL.

But please don’t call them flying cars, because that’s just wrong. “It’s not a car, it’s something different,” says Bill Crossley, an aerospace engineer and professor at the Purdue University School of Aeronautics and Astronautics. They’re also not choppers. “It’s not a helicopter in the traditional configuration sense—it’s not one big main rotor providing lift and forward propulsion—almost all the concepts have some kind of powered lift, and then separate powered propulsion.”

Case in point is the Boeing test vehicle, which has a “cruise” propeller in the back for horizontal flight, in addition to the eight rotors for vertical flight. Meanwhile, a design called the Volocopter (which has flown) does come close to being a helicopter.

“They need their own terminology and their own space,” he adds. One term for the field is urban air mobility, or UAM, which NASA uses. Another is air taxi, although Crossley speculates that if the prices are too high for a ride, they might need to be more like an “air super shuttle.” (Which in term would necessitate a bigger vehicle.)

But whatever you call them, the idea is that they’d be used for short trips in urban areas. Their mission? “To be able to land and take off vertically, so you can work in an urban environment,” Crossley says. “It’s not going to be cheaper than getting in a car that’s on the ground, but it’s gonna be faster.” You won’t take one from New York to California, of course, but you might take one across San Francisco Bay.

But challenges remain, and the general public isn’t going to be hitching a ride after summoning one of these vehicles via an app tomorrow. One problem is getting battery tech to where it needs to be, even if it has improved. “Lithium-ion batteries are far less energy dense than petroleum fuels,” Bowles says. That’s why your flight across the ocean is powered by jet fuel, but a 10- to 15-minute jaunt in a city could be battery-driven.

Crossley ticks off other challenges and unknowns. How noisy will they be? How much downwash will craft with all those rotors produce? Will they be reliable enough? Could they fly in all types of weather? Then there’s the “ride quality”—will the journey be smooth enough for passengers to accept, considering that some people understandably don’t even like turbulence on bigger planes? Can one vehicle type work in multiple cities, like a 737 does?

But generally, what interests Crossley about them is that “they actually can do the mission we’re talking about,” he says, pointing out improvements that have been made in batteries and the fact that you can use many smaller electric motors on the vehicle, like what Boeing showed off. “That’s really cool.”

Bowles echoes that. “As an engineer, it’s some of the most exciting times of our lives right now.”