Watch this electric air taxi take off vertically, thanks to 36 swiveling ‘jet’ engines

It has a range of 186 miles and is optimized to cruise. 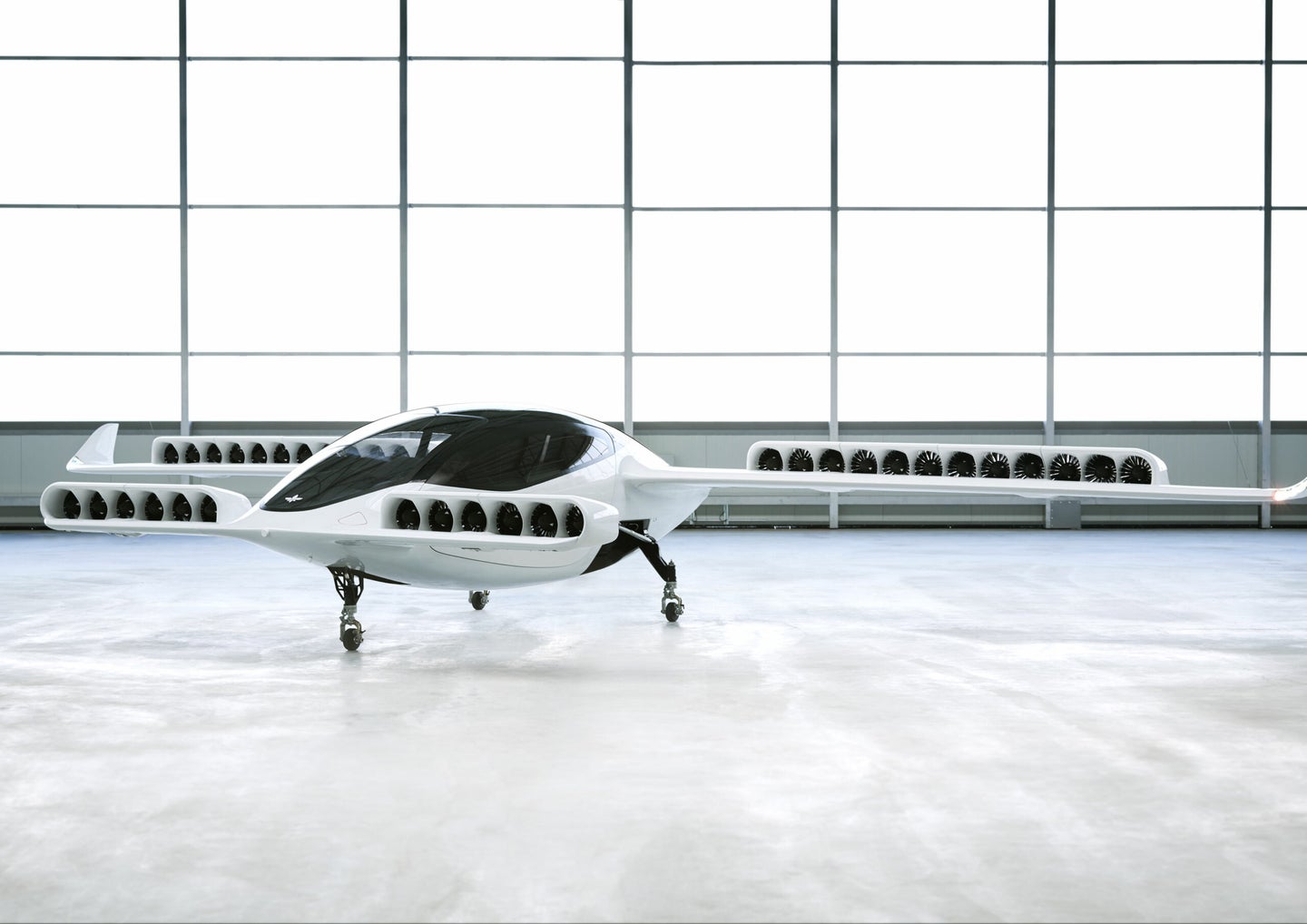 Every plane you’ve ever flown in looks basically the same: fixed wings, propellers or jet engines, and a fuselage with seats in it. They vary in size, but not radically in shape.

But right now is an exciting time for flying machines that differ from the winged tubes you’re used to falling asleep in. Case in point? A new little “jet” from a German company called Lilium. It’s totally electric, has 36 little engines, and seats a total of five people. It flew for the first time earlier this month, although the company only announced that fact this week.

The plane’s most distinctive feature is the way the engines are attached to flaps on its two wings. Because those flaps can move, the engines can point straight down—to direct the thrust towards the ground, and allow the plane to take off or land. When pointed backwards, they push the plane through the air and let it cruise. In other words, by moving the engines around, the plane can go in different directions.

And while the company refers to the craft as a jet, and describes the engines as electric jet engines, they are very different from what you see hanging below the wings of standard commercial jets, which burn fuel. Technically speaking, Lilium is using “ducted fans,” says William Crossley, a professor at Purdue University’s School of Aeronautics and Astronautics.

The engines look almost like the fans you’d see in a ventilation shaft, and they’re surrounded by an enclosure (or duct) that it spins within, as opposed to the way a regular propeller just spins in the open air. That design gives the aircraft a few advantages. For one, since the fan blades are enclosed, it’s quieter than a traditional unenclosed propeller would be. “That’s probably the biggest advantage,” Crossley says. This type of engine is also likely more efficient than a propeller of about the same size. Those ducts add weight, though—an important reminder that in aviation, features on a plane usually come with a trade-off.

Redundancy is a necessary feature on any airplane, and there are a total of 36 motors on this craft. If one conks out, the flight control system can likely handle that event, Crossley says.

Because of the plane’s design, it will likely be more efficient at forward cruise flight than when it is taking off, hovering, or landing, which all happens vertically. “The folks at Lilium have decided to make this a cruise-efficient vehicle,” Crossley says. That’s because of its fixed wings—the things that the movable flaps and engines are attached to. “It gets most of its lift in cruise from the wings.”

It’s a trade-off that the company’s CEO explained to Aviation Week, saying that they “deliberately traded that [efficiency when it’s hovering] for an aircraft that is perfectly optimized for cruise flight, and that is where our high range comes from.”

Indeed, the range is 186 miles, according to the company, meaning that it could take people on jaunts between cities, and not just within urban areas.

All told, the Lilium ducted-fan flying machine represents an exciting addition to a world of air travel sometimes called urban air mobility, in which little flying vehicles (like this Boeing prototype) known as VTOLs—that stands for vertical take-off and landing—promise to whisk people short distances around cities or from the suburbs into them. Sometimes they’re called eVTOLs, for “electric,” since they’re typically powered purely by electric motors and batteries.

The point of this kind of craft? Lilium says it will indeed be used for urban air mobility (think Uber or Lyft, but for the air) and describes it as an “air taxi.” Its first test was on the morning of May 4, and the video the company released shows it simply taking off, hovering, and then landing—it doesn’t appear the company has tested the craft in forward cruise flight yet.