The future of the commute could get a little greener. 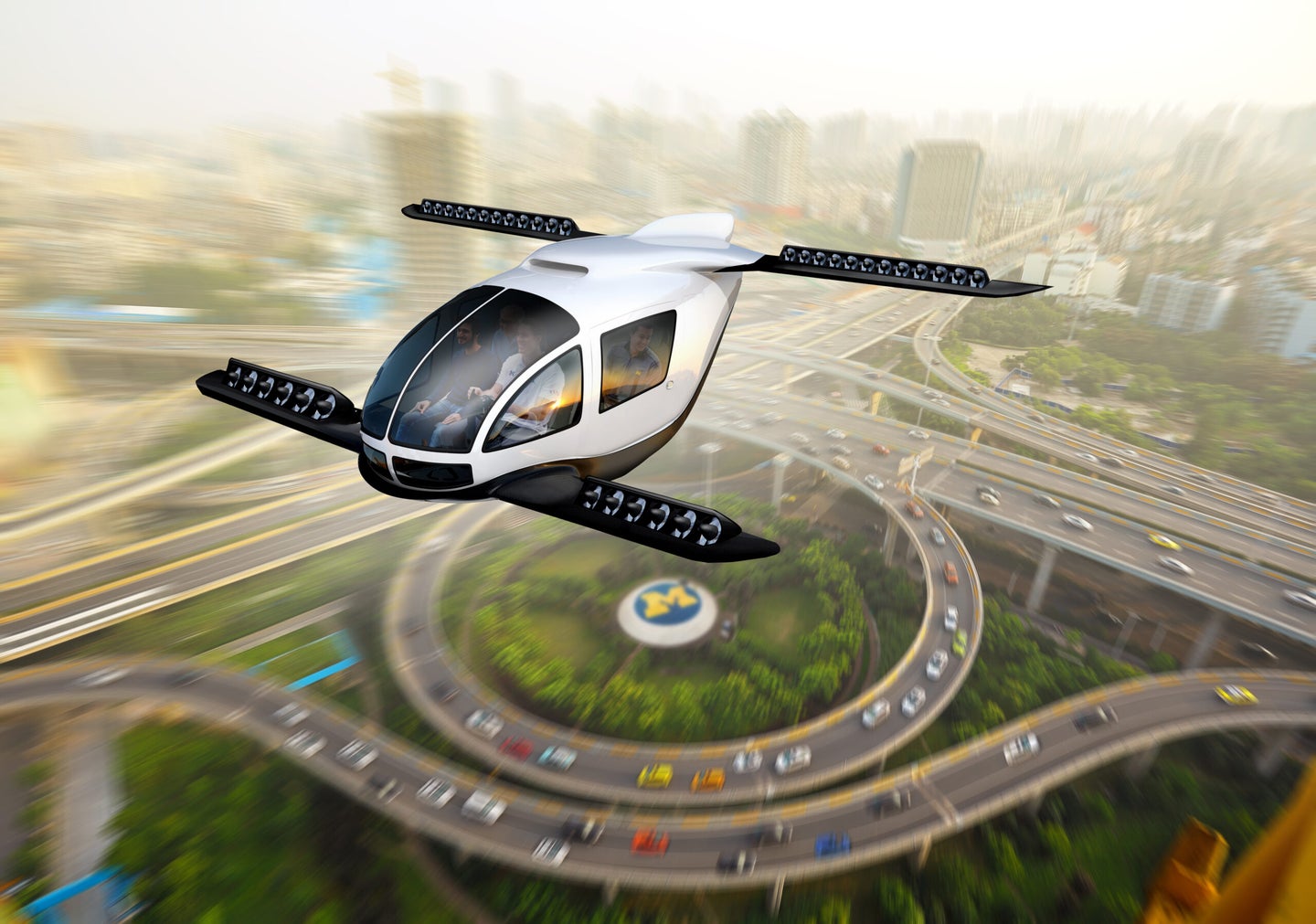 Skipping rush hour traffic by hopping in a flying taxi may seem like science fiction, but a number of corporations and startups are currently working on prototypes. In October, Cora—a company testing electric, autonomous flying cars—partnered with Air New Zealand in a step toward commercialization. And Boeing tested out their own self-driving air taxi in January. Even Uber has unveiled plans to launch a flying vehicle service by 2023.

These prototypes are electric and don’t give off any planet-warming greenhouse gases during flight, but mining and producing the electricity to charge their batteries is still an environmental cost. But the flying air taxis of the near future, which can both hover like helicopters and glide like airplanes, might be more energy efficient than you’d think—provided you carpool and only use them for long-distance travel.

That’s according to scientists at the University of Michigan, who recently considered the energy costs of these vehicles compared to ground-based cars.

“I was surprised by how competitive [the flying cars] were in these scenarios that we explored because of the energy intensity to lift the vehicle,” says Gregory Keoleian, an author of the study and director of the university’s Center for Sustainable Systems. Flying cars rely on distributed electric propulsion, which is basically a series of small propellers along the vehicle’s wings. With this system, they can avoid runways and move about much like a drone, with vertical take-off and landing.

To understand what energy these flying vehicles would require, the scientists used available data from other scientific and industry reports. The model vehicle they considered had one pilot and four passenger seats, flew at an altitude of 1,000 feet, and could zoom around at up to 150 miles per hour. They compared this example to two cars: one, gasoline-powered, driving 34.1 miles per gallon, and another, electric-powered, which drove the equivalent of 108.5 miles per gallon based on its energy use. The scientists compared efficiency between the three vehicles at distances from three to 155 miles.

For short trips of less than 22 miles, both gasoline and electric cars beat out the airborne vehicles in efficiency, according to the study, published Tuesday in Nature Communications. Short trips make up most of Americans’ driving—the average commute distance is 11 miles. Over short distances, air taxis would mostly hover, using up a lot of energy in the process.

But over long distances, air taxi efficiency improved. For a 62-mile, nonstop trip, air taxi use led to 35 percent fewer greenhouse gas emissions compared to the gas-burning car. But compared to an electric car travelling the same distance, the air taxi had 28 percent more emissions. This scenario ignores passengers, however. If you load up the air taxi with four people and compare it to the other cars with average occupancy—1.54 people—it looks even greener. On the basis of emissions produced per passenger across these 62 miles, the full-capacity air taxi has 52 percent fewer emissions per trip than the gas car, and 6 percent less than the electric car.

This implies that there’s a sort of ideal niche for these flying cars: carpooling over long distances. They also could be helpful in congested areas or those without a straight path to your destination. “If you’re flying from Detroit to Cleveland the [air taxi] can go right over the water,” says Keoleian. “Whereas the ground-based vehicle has to go around Lake Erie.”

You could use them to save time in commuter nightmares like Southern California. Driving from Irvine to Malibu during rush hour can take up to three and a half hours, but an air taxi can breeze through the trip in just 27 minutes—assuming air taxis don’t grow so rapidly they create their own traffic. “You save up to 80 percent of travel time flying versus going on the ground,” says Akshat Kasliwal, the study’s first author and graduate student in sustainable systems. Plus, “it’s a lot more pleasant to just cruise over at a 1,000 feet and and not be stuck behind big trucks on the highway.”

It pays off for air taxi companies to incentivize carpooling, too. “It is very important that you have high-occupancy levels similar to how a commercial airline is operated—the more you can fill the seats, the more revenue and the higher your profitability,” says Jim Gawron, a co-author of the study and graduate student in business sustainability. So, the business model would tend to favor the more sustainable carpool trips.

The researchers hope that tech companies use their framework to evaluate prototypes. Since some of these air taxis might take off by 2023, it’s important to consider what their impact—positive or negative—might be. From a sustainability standpoint, Keoleian hopes that this new service doesn’t make it easier to live further from work: “We don’t want for [air taxis] to encourage something like sprawl.”

There are many other factors other than greenhouse gases to consider.

While the study compared energy-related emissions—from mining, production, and transport to using fuel—of different vehicles, it didn’t show the complete picture by including the environmental impacts of making and disposing the machinery. The aircraft the team modelled was lighter than a typical sedan, and, generally, less material means less of an environmental impact. However, the types of materials matter. Carbon fiber, often used in light aircraft, is environmentally costly to produce, adds Keoleian.

Implementing regulations to ensure safe travels will also be key to reducing negative side effects of this new technology. “If these are flying around like The Jetsons, that’s a lot of visual pollution,” says Keoleian. As tech companies like Uber Elevate move forward with their designs, the team hopes they consider such impacts. “It’s really important for companies like that to understand the findings and recommendations of our studies,” says Keoleian.