MIT is teaching a robot to beat you at Jenga 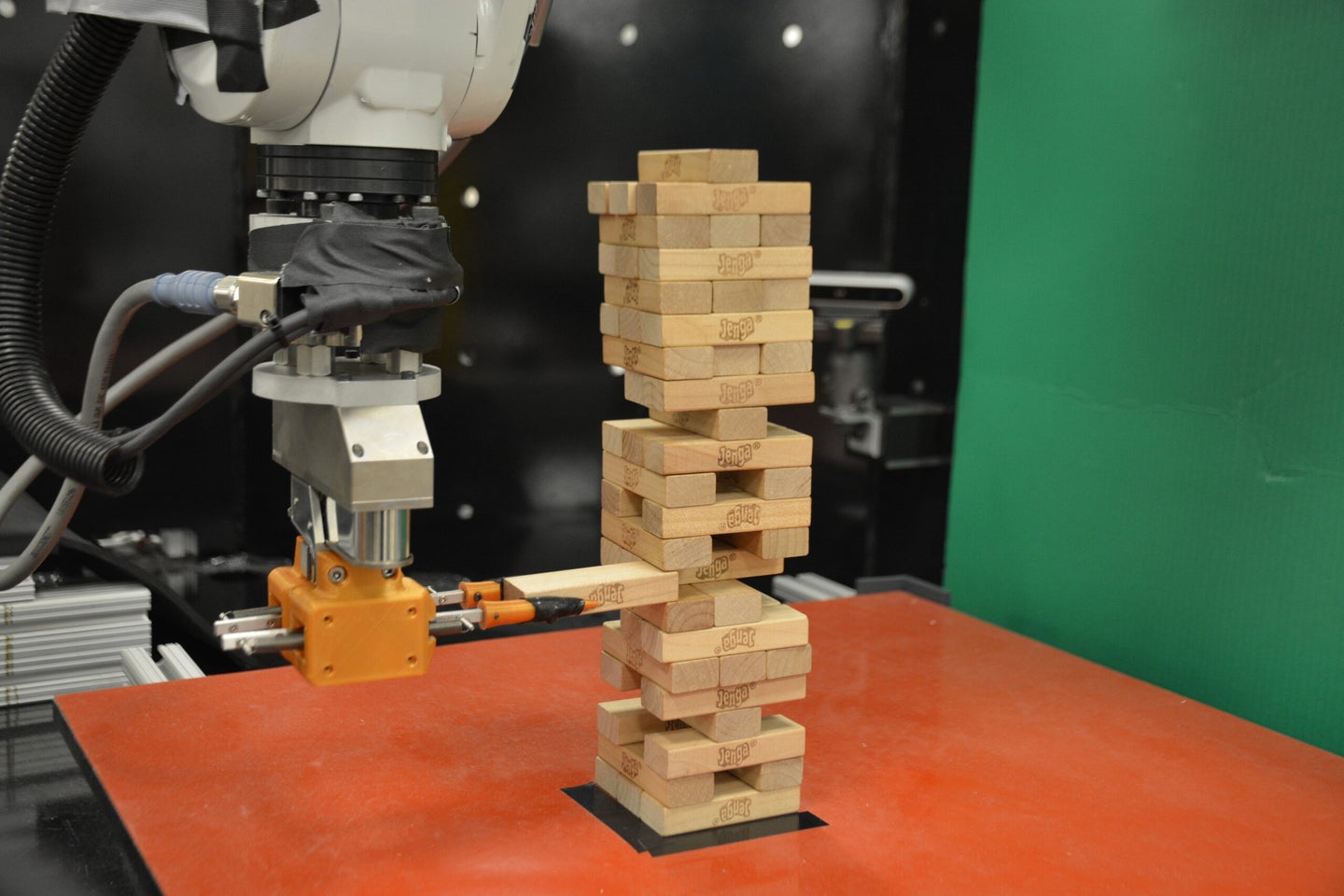 You probably remember the rules of Jenga: You tap at a wooden block in the tower, try to remove it, and then hopefully place the piece back on top of the increasingly unstable creation. The first person to knock the tower over loses. Jenga!

Jenga’s physical nature makes it different from classic coffee table games like chess, or Go, which are contests at which artificial intelligence already excels. As complex as those games are, Jenga poses its own unique challenges for a robot. Mechanical engineers at the Massachusetts Institute of Technology have been working on a two-fingered bot that uses AI and sensors to figure out the physics of that game and play it.

With a game like chess, you can glean all the information you need to play, and hopefully win, just by looking at the board. No one needs to poke at the knight on a chess board to figure out if it’s capable of moving. (And with board games like that, AI software can learn rapidly in simulation.) Jenga is different. You can’t just look. You need to touch. “You need to physically interact with it to actually get enough information to make a decision,” says Nima Fazeli, a doctoral candidate and mechanical engineer at MIT, and the first author on a new paper in the journal Science Robotics describing the Jenga-playing robot.

Fazeli and his colleagues built the robot with two finger-like appendages it can use to push on a block and later grasp it. The machine relies on two sensors to perceive its Jenga-filled world: a camera that sees the tower, and a force sensor in its “wrist” to know how hard it is pushing. While they had to build its gripper component, the arm itself is a off-the-shelf-style robotic device. Through those sensors and machine learning techniques like neural networks, it was able to discern the physics of the game.

The robot learned through experience. The eventual goal was for it to become “good at predicting when [it] is a good idea to keep pushing, or when [it] is a good idea to stop pushing,” says Alberto Rodriguez, the paper’s senior author and a professor of mechanical engineering at MIT. Through poking at blocks and seeing if they feel like they could move easily or not, or if the tower collapses, the robot can “build nuggets of experience.”

That learning is what the robot can do thanks to artificial intelligence, although the engineers had to give it some basic information first—they told it that the goal of the game was to remove blocks and then place them on top. But the other stuff is autonomous. “It decides on its own which block to push, [and] which blocks to probe; it decides on its own how to extract them; and it decides on its own when it’s a good idea to keep extracting them, or to move to another one,” says Rodriguez. It can give up on a specific block if it needs to, an important skill.

But don’t worry that this robot is going to show up at your door for your next game night and clobber you and your friends. Rodriguez says that the contraption is “good enough so that it could play against a human,” and it would be fun, even if it is slow. But the researchers say an expert could still beat it. “This is definitely not a project that was driven by trying to achieve superhuman performance,” he adds.

Worried about robots taking over the world? Take heart that while AI systems are great at board games like chess, they still need some work before easily clobbering us at a physical game of blocks. Jenga!