SpaceX and NASA officially flew people into space. What’s next?

The Crew-1 launch opens a new chapter in human spaceflight. 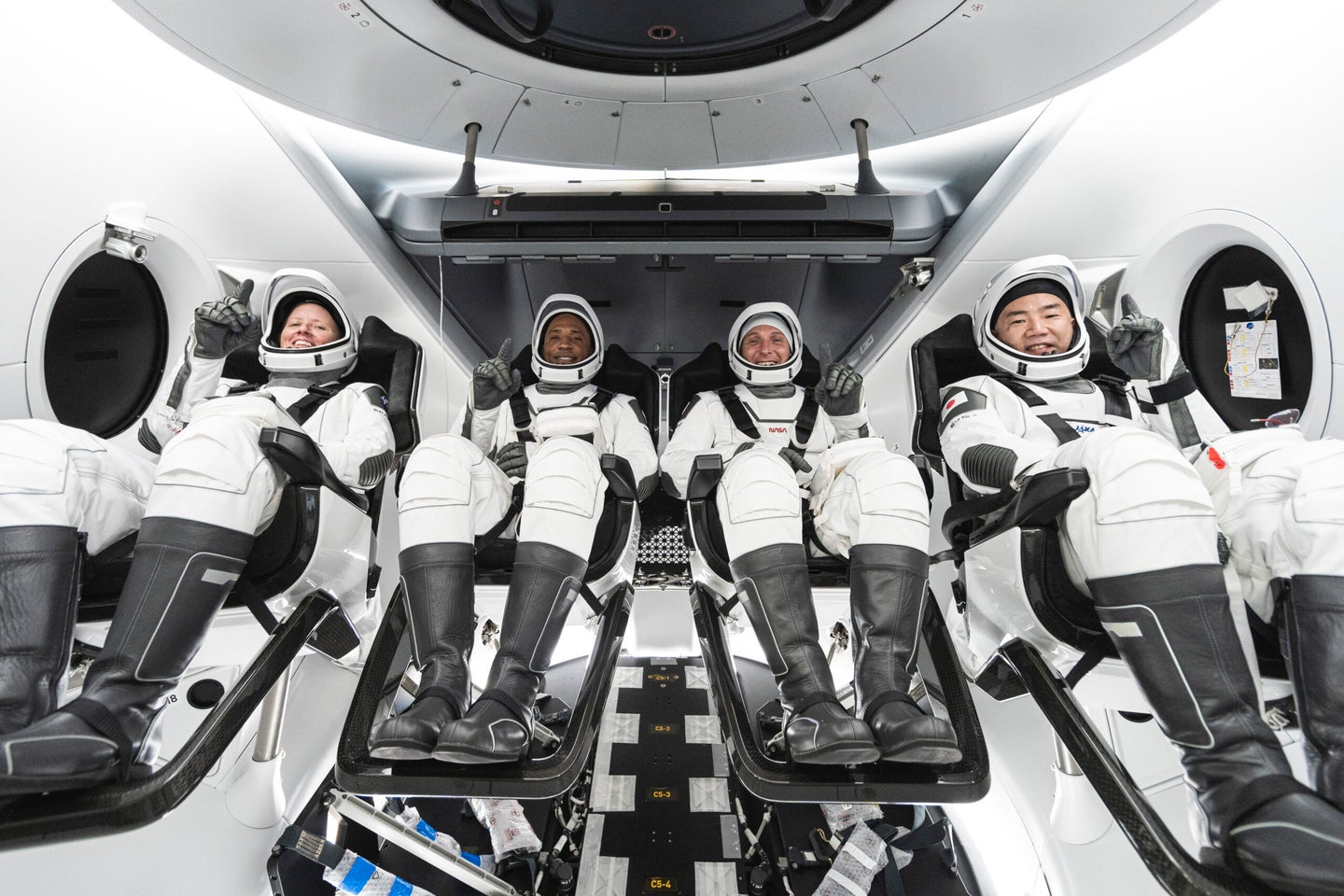 On April 12, 1981, the space shuttle Columbia blasted off from the Florida coast. NASA dubbed the flight Space Transportation System-1, or STS-1 for short, and it marked the first of 135 space shuttle missions. Over the next three decades, a fleet of five shuttles would carry more than 800 astronauts into orbit, where they accomplished feats including the launch of the Hubble Space Telescope and the assembly of the International Space Station (ISS).

Sunday night, the Crew Dragon capsule—Resilience—lifted off the launchpad with four ISS-bound astronauts aboard. As a demonstration of the United States’ ability to put human beings in space, the mission, designated Crew-1, harkens back to STS-1. After nearly a decade of bumming rides off the Russian space agency (and paying handsomely for the privilege), NASA officials look forward to being able to stuff the ISS full of astronauts and take full advantage of the facility’s research capacity.

Yet the Crew-1 mission is also a sign of how much the space industry has changed since the first shuttle took off. Resilience belongs not to NASA but to SpaceX, a private company who designed, built, and operates the spacecraft. The space agency mentored the company throughout the vehicle’s development, but ultimately acts as a customer, booking SpaceX seats for astronauts much as the FBI might buy an agent a ticket to fly Delta. And now that SpaceX has a proven track record of flying astronauts into space, it’s eager to expand its clientele—with NASA’s blessing.

“In this new era, especially in the low earth orbit, NASA has the ability to be a customer,” said NASA administrator Jim Bridenstine at a press conference ahead of a crewed demonstration flight of Crew Dragon in June. “One customer of many costumers.”

The Crew Dragon capsule is the first graduate of NASA’s Commercial Crew Program, an initiative with roots reaching back to the Bush administration aiming to free up funding for deep space exploration by having private companies handle simpler operations nearer to Earth. After years of development and testing delays, SpaceX became the first to cross the finish line this summer when it flew NASA astronauts Robert Behnken and Douglas Hurley to the ISS and brought them safely back home with a test flight—Crew Dragon Demo-1.

Sunday’s launch marks the first operational, long-term flight of a Crew Dragon vehicle, now fully certified for official use, and the end of NASA’s reliance on Russia’s Soyuz space capsule to reach the ISS. The two agencies have enjoyed a friendly post-Cold War relationship, but Soyuz dependence meant launching on Russia’s schedule. And it wasn’t cheap either. While a recent seat cost NASA 90 million dollars, Space.com reports, SpaceX tickets are expected to start off at around $55 million. Moving forward, NASA and the Russian space agency plan to share rides and swap seats without exchanging money.

“It’s also good to have your own capabilities, said Mike Hopkins, the spacecraft commander

at a press conference before launch. “It’s great for the world to have options.”

And more options are coming, with Boeing’s CST-100 Starliner capsule also nearing Commercial Crew alumni status. A pair of software glitches stopped it from reaching the ISS during an uncrewed test flight last year, but the company hopes to try again next year.

So far, SpaceX’s mission appears to be going smoothly. Resilience lifted off just ahead of tropical storm Eta at 7:27 pm Sunday Eastern time, and the first full commercial crew—comprising NASA astronauts Hopkins, Victor Glover (the first Black astronaut on the ISS since its construction), Shannon Walker, and Japanese astronaut Soichi Noguchi—settled in. Upon reaching orbit, Resilience became a microgravity environment, which the crew indicated to spectators online by letting a Baby Yoda doll float weightlessly across the capsule.

Roughly three and a half hours after launch, the four astronauts (along with Baby Yoda) climbed into the ISS, exchanging hugs with the three crew members already on board—Russian cosmonauts Sergey Ryzhikov and Sergey Kud-Sverchkov and NASA astronaut Kate Rubins.

But the new arrivals won’t have much time to rest, because NASA is keen to squeeze as many science results as it can out of the $100-billion orbiting laboratory. Glover will take biological samples to see whether his diet in space will affect the microbes in his gut and his immune system. The crew will also attempt to grow radishes, experiment with rock-munching microbes that could assist with future space mining operations, and test drive the cooling system of NASA’s next generation spacesuit, among other experiments.

“It’s going to be exciting to see how much work we’ll be able to get done while we’re there,” Hopkins said. “I think they’re going to keep us pretty busy.”

And the crew should be even more productive than usual. With both the Soyuz and Crew Dragon operational, the space agencies have been able to pack the ISS—which usually hosts between three and six astronauts—with a long-term crew of seven for the first time. In fact, the station now brims with so many astronauts that it has run out of sleeping berths, so Hopkins may be snoozing in the Resilience capsule itself, he said during the press conference.

The four astronauts will remain in space for the next six months before returning to Earth, but SpaceX and NASA plan to keep up a high cadence of flights. As many as seven Dragon capsules (carrying crew, cargo, or both) may visit the ISS over the next year and a half, maintaining the station’s no vacancy status.

“This mission represents the initiation of a Dragon in orbit continuously, knocking on wood,” Shotwell said, according to The Verge.

With NASA’s seal of approval that SpaceX is ready for human spaceflight, the company is free to take on well-heeled private clients as well. Seven space tourists visited the ISS between 2001 and 2009 (after which the Soyuz became oversubscribed), all excursions brokered by the company Space Adventures. Now that Crew Dragon is open for business, space tourism for the ultrarich might be poised for a comeback.

SpaceX has already announced a partnership with private spaceflight company Space Adventures to fly a record-breaking high orbit around the Earth in a Crew Dragon, without docking with the ISS. The first flight could take place within two years.

Space Adventures isn’t the only company demanding SpaceX’s new services. Axiom Space—which plans to assemble its own private space station this decade—has announced that it will fly the first “fully private” flight to the ISS late next year. Former NASA astronaut Michael López-Alegría, Israeli fighter pilot and businessman Eytan Stibbe, and two unconfirmed passengers (rumored to be actor Tom Cruise and director Doug Liman, who intend to film a movie in space) will form the four-person crew of mission “Ax-1.” The passengers will spend ten days aboard the ISS, but no word yet on where they’ll be sleeping.

For SpaceX’s ambitions to bring space closer to Earth, the sky seems to be proving no limit at all.